It's all in the family: the Gondor family legacy

Eli and Peyton Manning have followed in their father's footsteps as elite NFL quarterbacks. Serena and Venus Williams were on top of the female tennis world for the better part of the past decade. Brothers Dom and Joe DiMaggio were both All-Star caliber outfielders in the 1940s and 50s. Blair is also home to its own pair of talented siblings: brothers Andrew and Peter Gondor. 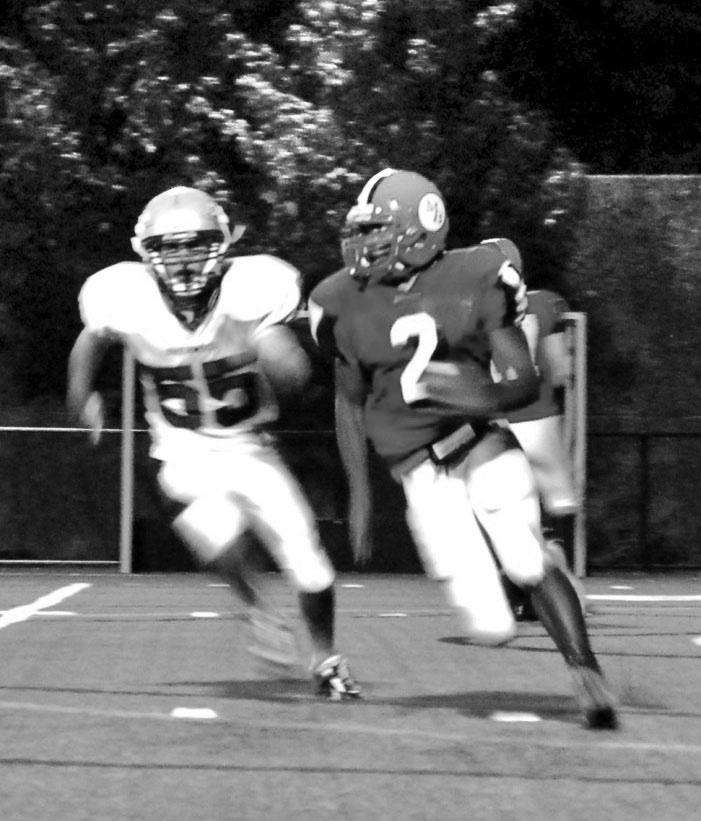 Andrew, a 2010 graduate, and his younger brother Peter, a current senior, were and are both key players on the Blair football team. Growing up in the same household, Andrew and pushed each other to be the best athletes possible, which made them the players they are today.

The two boys started playing organized football in 2001 when they joined the Takoma Park Rams team. Both Peter and Andrew knew that football was the sport for them almost instantly. "As soon as I touched the field I had a natural feel for the sport and found it really enjoyable and easy. The more I played it, the more I fell in love with it,” says Andrew.

Peter also felt that football was the right sport for him as soon as he started playing with the Rams. As soon as the pair stepped onto the football field, they both knew that their mother's decision to sign them up to play was a great decision.

Junior Varsity football coach Adrian Kelly, who coached both boys, believes that their mother's decision to sign them up for football as kids gave them a lasting advantage on the field. "They came in having background little league experience and were more organized and experienced than others,” says Kelly. Most players on the Blair football only begin playing in 9th grade, and sometimes even later into high school.

The Gondor brothers have not only relied on their early starting point playing football. They have also pushed each other to work harder and become better players.

Peter had Andrew to look up to as he developed his own football skills. He credits Andrew with helping him reach new levels. Together the brothers initiated a rigorous training schedule when Andrew joined the Blair team, even though Peter was still in middle school. "[Andrew] would wake me up early in the morning when I was in middle school so we could work out,” Peter says.

Peter also says that when Andrew comes back from college during breaks, the two work out together and Andrew also teaches Peter many of the drills that he does in college. 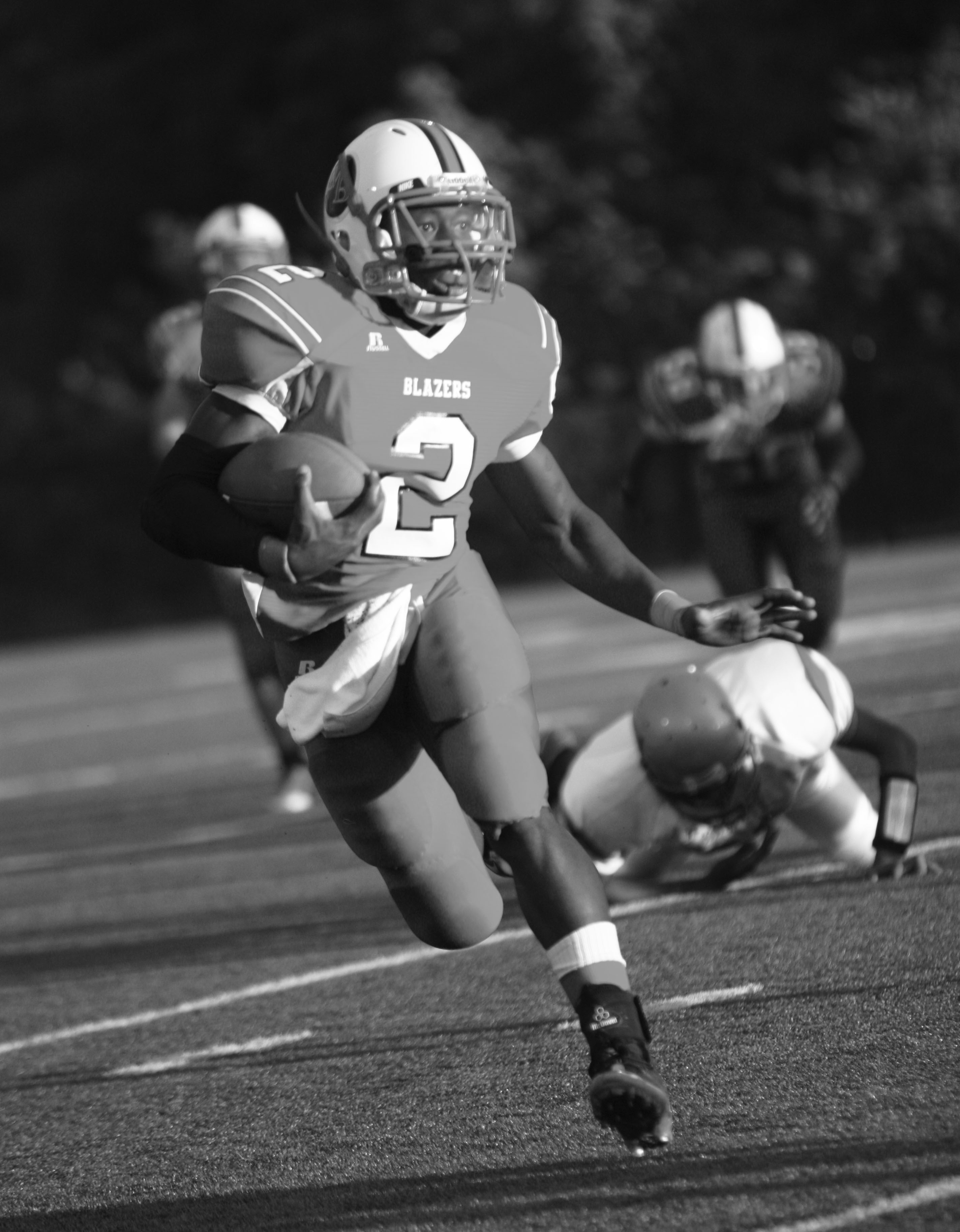 Photo:
It has taken high levels of dedication and hard work to get to the place they are today. Despite this hard work, Andrew believes there is something that makes him and Peter special. "Me and my brother persevere....we find it very hard to give up,” says Andrew. "The reason we do so well is because we work very hard at everything we do. Along with our work ethic comes raw talent.”

Andrew also believes that weight training teacher Robert McMahon has helped him and his brother keep a good attitude while working out. Peter and Andrew say that McMahon keeps all of the school's athletes from slacking off, and he pushed them to work out as hard and as often as they could.

While many people workout in school, Peter and Andrew push each other to become better players outside of school. The two workout most days of the week, and used to do it, many times, together.

Kelly attributes part of the Gondors' success to the time that they have put in to becoming better football players. "They're naturally fast kids. But they also work hard during the offseason to get their bodies ready for the season... They definitely work hard and condition hard.”

All of the work that the two put in during the offseason has helped the brothers combat the toll that playing football puts on their bodies.

Because the two play nearly identical positions and grew up playing together, they would be expected by many to be the same in their talents, but this isn't the case. The two are able keep their individuality on the field and have their own strengths over the other.

Coach Kelly believes that each has their own special niche. Kelly believes that Andrew's strength at Blair was his ability to adapt to the teams needs and fill in which ever position they needed. "Andrew is special in his versatility. He played so many positions,” says Kelly.

On the other hand, Kelly thinks that Peter is a valuable leader and motivator for the team. "Peter's trying to take up the leadership role and carry the team, especially this season,” says Kelly. "There are times he could lay down, but he doesn't,” says Kelly.

Since he was the older sibling, Andrew was put in a position of leadership from a young age. "As an older brother I pushed myself to be the best I could be to set the best example I could,” says Andrew.

Peter says a little sibling rivalry helps him work harder, but when he's sprinting down the field with an opponent trailing him, none of that really matters. All that matters is that he gets into the end zone and scores.

However, maybe Peter is aided in getting the touchdown because of the 6 a.m. workouts he did with his brother back in middle school. Both Gondors believe that without each other they wouldn't be the players they are today.

Andrew's football career, unlike many, didn't stop after he graduated from high school. Over 250,000 seniors alone play high school football, meaning that around 1,000,000 high schoolers nationwide play football. But of those 250,000 seniors, only about 15,000, or 6 percent, will play at the college level, according to the National Collegiate Athletic Association. So while Concord University is not one of the elite football programs in the country, Andrew is one of only a select group of football players to make it to the collegiate level. So far this season, Andrew has 267 all purpose yards through seven games.