It's all over: now what?

Some of us are still in denial that it has all ended and that there really aren't any more "Harry Potter" books or movies coming out. Those of us suffering from "Harry Potter" withdrawal tend to periodically stalk the series' actors and actresses every so often to find out what they are up to. Although the final book and movie in the series ended with a heart-warming 19 years later epilogue, the lives of the actors' and actresses' continue to be a mystery to us. So I've taken the time to research the ongoing lives of our favorite "Harry Potter" actors and actresses now that a decade of magical filming is over. 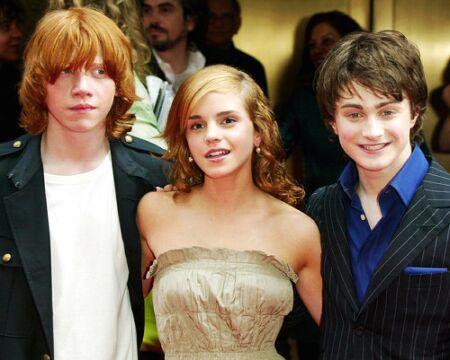 Photo: The stars of the ever-popular "Harry Potter" movie series have gone their separate ways, though the three main characters from the films still share a strong friendship.

The stars of the ever-popular "Harry Potter" movie series have gone their separate ways, though the three main characters from the films still share a strong friendship.  Photo courtesy of readingharry.com.

Daniel Radcliffe (Harry Potter), the chosen one, has traded in his robes and wand for a suit and tie as the main character in the 2011 Broadway revival of the musical "How to Succeed in Business Without Really Trying." Not only is it a huge transition from the screen to the stage, but who knew he could sing? Additionally, Radcliffe stars in the 2012 movie "The Woman in Black," a supernatural thriller movie directed by James Watkins. Outside of the realm of acting, Radcliffe has devoted much of his time to supporting various charities. He earned the "Hero Award" for his work with "The Trevor Project," a non-profit organization devoted to suicide prevention among LGBT youth. Ultimately, Radcliffe has acquired about £28.5 million, making him wealthier than some British royalty.

Emma Watson (Hermione Granger) has spent her time since playing the studious Hermione Granger modeling, attending Brown University and acting in other movies. Watson took some time off from her studies at Brown to promote the two parts of the seventh "Harry Potter" installment, but as of Fall 2011, she is back and studying at Worcester College in Oxford for an exchange program. After "Harry Potter" ended, Watson has had prominent roles in two movies. One, "The Perks of Being a Wallflower," is in postproduction and will come out in 2012 and the other, "My Week With Marilyn," came out in 2011.

Rupert Grint (Ron Weasley) hit it right the first time and has found his niche in the world of on-screen acting. Grint has spent his time with smaller-scale movies, a step back from the raging world of "Harry Potter." He starred in the movie "Comrade," about enemy soldiers in World War II and he is currently working on the movie "Eddie 'The Eagle' Edwards" about a ski jumper. Grint has also appeared in many commercials and BBC television shows as he rolls around town driving his own ice-cream truck.

James and Oliver Phelps (Fred and George Weasley) continue to work together even after their roles as the twins in the "Harry Potter" series. They are currently working on writing two television pilots, one about an alien school and the other about how unusual phrases came to be. The twins are also toying with documentary writing and production.

Evanna Lynch (Luna Lovegood) has continued acting and is involved in the "Harry Potter Alliance," an organization devoted to raising money through "Harry Potter" fandom and donating it to charitable causes.