It’s no mystery why “Enola Holmes” is popular

Netflix’s “Enola Holmes” is a wonderfully fun movie about puzzles and family.

The cultural impact of Sherlock Holmes is hard to understate, producing countless stories as well as spin-offs. “Enola Holmes,” released on September 23, brings a new perspective to the screen by telling the story of Sherlock’s younger sister, Enola (Millie Bobby Brown). Based on The Enola Holmes Mysteries by Nancy Springer and directed by Harry Bradbeer, “Enola Holmes” explores the life and adventures of Enola Holmes, who has a knack for mysteries and a desire to find the truth.

Enola is an independent young girl who was raised by her single mother (Helena Bonham Carter). Conflict arises when one day, her mother mysteriously disappears. When her older brothers, Sherlock (Henry Cavill) and Mycroft Holmes (Sam Claflin), threaten to place her in a finishing school to ensure she is brought up well, Enola is forced to strike out on her own in an attempt to solve the mystery behind her mother’s disappearance. On the way, she meets the Viscount Tewkesbury (Louis Partridge), a young runaway fleeing unknown attackers. Together, they explore and unravel a plot that threatens the future of London.

This film is incredibly fun, and is very tongue in cheek. At many points during the movie, Brown turns to the camera for a quick aside that recaps the film up to the current point. These asides are funny, and Brown’s energy makes them even more enjoyable. However, there are some moments when Brown’s monologues to the camera feel forced, and take away from the action. When this happens, it can feel like the movie stops in order to make a comment, and then continues again at the same pace. This does make some parts of the movie feel exhausting, due to the quick jumps, and could be fixed by making sure to maintain tension, and not throw it away for jokes.

However, the editing does manage to create a light feeling, with cheerful music and the intro, which with its voiceover and light-hearted animations can either feel extremely fun or slightly tiresome, depending on personal taste. As a result, despite a 2 hours and 3 minute runtime, "Enola Holmes" moves relatively quickly. The exception to this is the beginning, and the couple of times when asides break the action, but the energy only occasionally falters once the movie is truly underway. 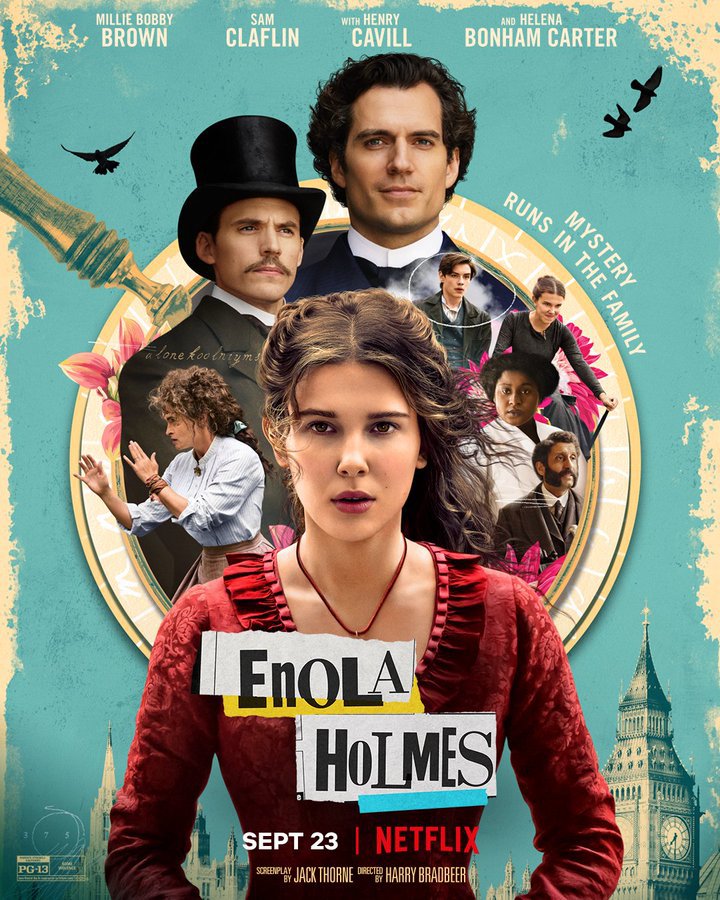 Photo: "Enola Holmes" is an enjoyable movie with funny moments and lots of charm (Image courtesy of Netflix).

Photo: "Enola Holmes" is an enjoyable movie with funny moments and lots of charm (Image courtesy of Netflix).

The actors in “Enola Holmes” are all talented, and play the characters extremely well. Brown perfectly encapsulates the bright and tomboyish character of Enola, while Partridge plays an endearingly loyal, if sometime bland, Tewkesbury. Sherlock and Mycroft do not appear very often, but when on screen they embody the characters well, with interesting twists on classic portrayals. In general, all the actors are fun to watch, and make the movie very enjoyable.

As an adaptation, “Enola Holmes” holds up. The movie is based on the first book of The Enola Holmes Mysteries, written in 2006. It is a surprisingly faithful adaptation, with only a few changes from the source material to add tension and to include more action scenes. Many of the changes were most likely made in order to bring the movie to a satisfying conclusion. This is probably to make up for the fact that it does not cover the whole series, but despite the small changes, “Enola Holmes” stays accurate to the book and brings the characters to the screen with extreme detail.

“Enola Holmes” includes important historical issues relevant in the 1900s, including reform bills that lowered voting restrictions and women’s suffrage movements. There are a few moments where the movie strays from realism in portraying these events, including some simplification. However, this is most likely in order to create a more compelling story, and so is understandable. The way that historical social movements are portrayed helps to give a context for the story that grounds it, despite some inaccuracies.

Overall, “Enola Holmes” has clever dialogue, an upbeat feeling and an excellent cast. It is a wonderful film to watch as a family, especially for fans of the book series.

“Enola Holmes” is rated PG-13 for some violence, and is now available on Netflix.