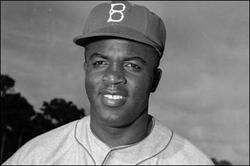 Born on Jan. 31, 1919 in Cairo, Georgia, Robinson worked for everything he achieved in life. His father abandoned his family when Robinson was only 13 months old. Mallie Robinson, Jackie's mother, then moved to Pasadena, California with her five children. With the guidance of a local mechanic and youthful minister, Robinson increasingly devoted his energy to sports as he entered his teens. After lettering in football, baseball, basketball and track in high school and junior college, Robinson was recruited by colleges from across the nation but chose to attend the University of California at Los Angeles (UCLA) because of its nearness to his mother's home.

At UCLA, Robinson's athleticism began to win him acclaim. In 1941, the year he was forced to leave college because of financial burdens, Robinson established himself as the first student to letter in four sports at UCLA in one year. A few months later, he was drafted into the U.S. army. The next year, he refused to sit in the back of a military bus, an incident which incited a race-based court martial that, with the help of the NAACP and the black press, was ended in exculpation. In November 1944, Robinson left with an honorable discharge.

While playing in the Negro American League, Robinson was chosen by the president of the Brooklyn Dodgers to play in the major leagues. In addition to the challenges typical of playing against the best baseball players in the country, Robinson had to face teammates petitioning to kick him off the team, base runners kicking their spiked shoes into his shins and pitchers throwing at his head. Even through such adversity, Robinson set multiple records; in just 10 years, Robinson led his team to win six pennants and a World Series, stole home 19 times, was named National League MVP in 1949 and is tied for the record of double plays made by a second baseman.

Robinson's retirement in 1956 did not stop him from helping the civil rights movement. Six years into retirement, he founded and chaired for the Board of Freedom National Bank, which was the first black-chartered and -managed bank in Harlem.

Information has been compiled from TIME 100: Jackie Robinson and Gale Biographies.