The Northwest Jaguars pummeled the Blair varsity wrestling team 63-16 in tonight's match, lowering Blair's season record to 3-10. The Blazers, had several outstanding individual performances, but it was not enough to stay competitive against a simply more talented Northwest team.

First-year wrestler sophomore Noah Sennett opened up the match with a slow-moving and inexperienced performance, although he did manage to last over a minute into the third period before he was pinned by his opponent. 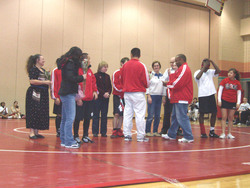 Photo: The coaches of the Blair wrestling team honor the graduating seniors with flowers before the home match on Feb. 1.

Photo: The coaches of the Blair wrestling team honor the graduating seniors with flowers before the home match on Feb. 1.

Sophomore Haben Ghebremeschel's (125) match had a similar ending. The overall match was much more intense, but after putting up a hard fight, Ghebremeschel was pinned with 21 seconds left in the third period. Junior Jon Burger (130) and freshman Eirene Dubuche (135) continued the Blazer's losing streak, both getting pinned in the first period. After just four matches, Blair was down by a score of 0-24.

The Blazer's situation began to brighten when sophomore Bereket Kebede (140)
stepped onto the mat. Kebede tried, almost successfully, to pin his
opponent in the second period with a half nelson, but time ran out before he
could complete the pin. He came close again in the third period as the
crowd cheered him on, but the time ran out once more. Kebede came close to defeating his opponent with a technical fall, and gave the Blazers their first points of the night, bringing the score to 4-24.

Several losses later, the Blazers were losing by the even larger margin of 4-36, however two wins near the end of the match helped Blair to slightly tighten the score. Senior Jean Ulysse (160) wrestled well, pinning his opponent 27 seconds into the second period to give Blair six points. The last Blair wrestler to win a match was senior Patrick Lao, who pinned his opponent 57 seconds into the third period.

Although the wrestlers had prepared themselves well for the meet, as a team they overmatched. "We practiced really hard this last week, and it's a pity we lost, especially in the last home match of the season. We all hustled, but we just got beat," said senior Marvin Arnold.

The team was dissatisfied with the loss, but Coach Jake Scott was not surprised. "We knew this was gonna be tough. There were a couple of disappointing matches."

Scott believes that the team needs to improve their mentality before and during the matches. "We have a group of guys who have not wrestled before and their confidence is not where it should be."

Blair's final match of the regular is on Feb. 4 as the Blazers visit Watkins Mill.

Clair Briggs. Clair Briggs is a junior in the Blair Magnet. She's really excited to be a part of Silver Chips this year! In her free time, Clair likes to spend time with her friends and she likes to eat Chipotle. She loves country music, California, and … More »