Japanese classes make rice balls for a good cause

"Change the world with onigiri" campaign comes to Blair

On Nov. 18 and 24, Japanese 1 classes, with teacher Yoko Zoll, made rice balls to participate in the "Change the world with onigiri" campaign, started by an organization called Table for Two.

Table for Two is a non-profit organization committed to fighting world hunger and obesity by partnering with restaurants and other health food companies to serve healthy meals and get meals to impoverished countries. The "Change the world with onigiri" campaign comes from a traditional Japanese food, onigiri, or rice balls. Anyone can participate in the campaign by posting pictures of themselves eating rice balls. For every picture posted to the campaign website, partner organizations of Table for Two will donate five school meals to children in need. Zoll was excited about being able to help students in less fortunate countries. "I wanted to help out those students who are in need," she said. 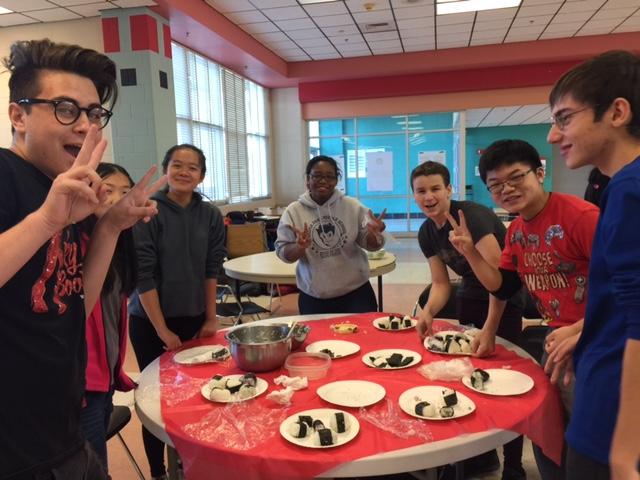 Zoll was encouraged to take part in the campaign by one of the four other Japanese teachers in the county. Yukiyo Moorman, the Japanese teacher at Walt Whitman High School, sent an email along with pictures of her students participating, which inspired Zoll to do the same. Sophomore Ashra Hillman was excited to make rice balls with his second period class, and was also pleased that he could enjoy something that was contributing to a good cause. "It was fun doing it for a good cause because it allowed others around the world to have the same experience I had with making and eating them," he said.

Zoll prepared the rice balls for her two class periods. She made and washed 55 cups of rice, brought bottles of water from home, carried in three rice cookers to make the rice before school started and brought three different seasonings for the rice. "I brought the rice in two small suitcases and made a couple trips to my car that morning," Zoll said of the various supplies needed to make the rice balls. 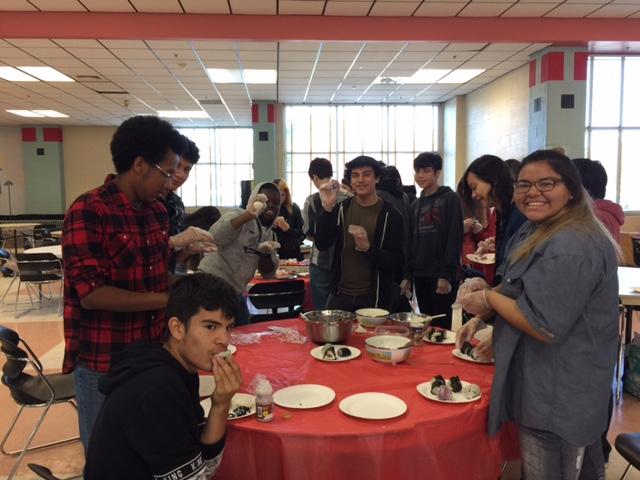 Photo: The Japanese 1 classes participated in a campaign to end world hunger and childhood obesity.

Photo: The Japanese 1 classes participated in a campaign to end world hunger and childhood obesity. Photo courtesy of Yoko Zoll.

Generally, Zoll makes sushi or rice balls at the end of the school year when she has a potluck for her students. She encourages her students to make Japanese food for these gatherings, as many have never tasted Japanese food. Although Zoll's main interest was to participate in the campaign for the cause behind it, she also wanted to integrate Japanese culture into the class in a way that would allow her students to enjoy themselves. "We had fun, some students had never made rice balls before," she said. Since it was new for many students, Zoll demonstrated how to make them before allowing her students to try for themselves. Hillman struggled a bit at first but by the end of it was making rice balls with ease. "Making the rice balls for the first time was difficult, but I got the hang of it and it became easier," he said.

A few teachers also showed up during their free periods after Zoll invited them. Magnet teachers David Stein and James Schafer and social studies teacher Kevin Moose showed up to try for themselves.