Blair hosted a group of 94 students visiting Washington, D.C. from Kaichi High School in Tokyo, Japan on Friday. Blazers enrolled in Japanese class escorted the students throughout the day, giving them an opportunity to tour Blair, eat a school lunch, observe a class and participate in games and performances. 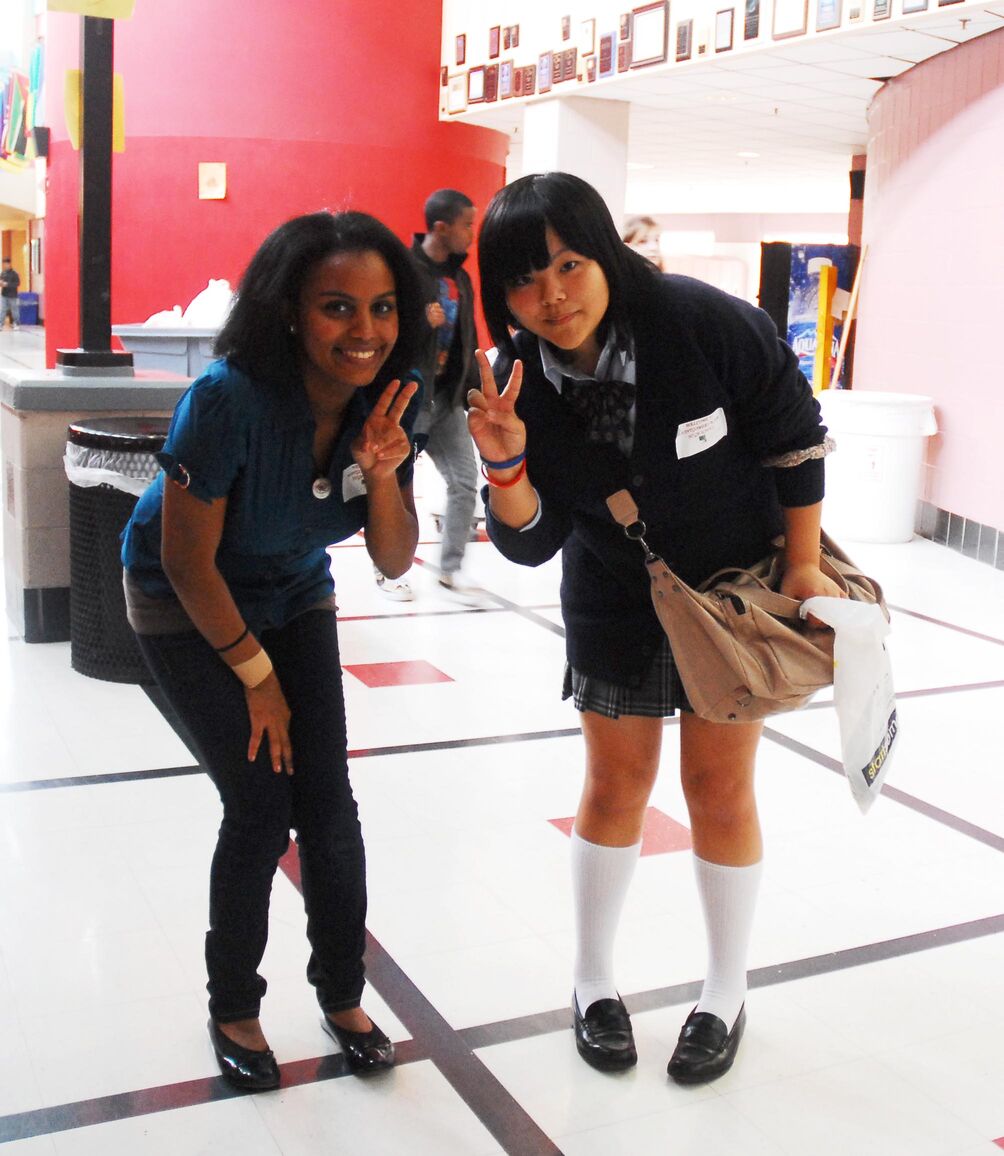 Photo: Senior Rahel Gebreyesus poses with Kaichi High School student Yo Eshino, who she guided around the school on Friday.

Photo: Senior Rahel Gebreyesus poses with Kaichi High School student Yo Eshino, who she guided around the school on Friday.

The visit to Blair was coordinated by International Studies Academy Leader Kevin Moose, who was contacted by the Nippon Travel Agency from its Bethesda branch. The agency, which specializes in Japanese travel affairs, had been working with Kaichi High School to organize a visit to an American school. "They initially contacted me last year, but it was cancelled due to the swine flu scare," he said. When Moose was contacted again this year, he accepted.

This was the largest group of foreign students Blair has ever hosted, according to Moose. Blair accommodated a total of 104 visitors, including two agents from Nippon Travel Agency and eight Kaichi teachers. "Nippon Travel was actually contacting several schools in the area, but most declined because of the large size," Moose said. "This did take a lot of planning."

The Kaichi students arrived at Blair at the start of 5A lunch and were met by Blair students in the auditorium. Blazers escorted their assigned students during both lunches, when they waited in line to receive food and walked up and down Blair Boulevard.

During the second half of sixth period, the group gathered in the Student Activity Center (SAC), where Kaichi students delivered brief speeches thanking Blair for its hospitality and performed several songs in Japanese. Blair students also gave musical performances and presented the Kaichi students with Blair lanyards and pens.

The Kaichi students expressed enthusiasm about their experience at Blair. "This school is very friendly," Teruhito Nakano said. Yo Eshino's first impression of Blair was awe. "It's really big and there are many kinds of people," she said.

Japanese teacher Yoko Zoll believed this was an excellent opportunity for students to improve their command of the language. "We practice a lot in class, but now they can go and use what they've learned," she said. Senior Jonathan Guzman also felt that communicating with the Kaichi students was worthwhile. "We learn a lot, but we never get to experience it firsthand like this."

While interactions between Blair and Kaichi students were initially reserved, tension slackened as the day unfolded. "The students finally warmed up by the end of the day," Blair Japanese teacher Kenneth Seat said. Guzman agreed, describing the friendship he developed with his assigned Kaichi student, Masashi Kajiuta. "From the start we were more formal and polite," he said. "But after a while we started to talk more about hobbies and stuff, eventually to the point of asking things like, 'is there a girl you like?'" Many students also exchanged small gifts and e-mail addresses.

Students also witnessed cultural differences between American and Japanese students. "One thing we immediately noticed was they were more separated by gender," senior Rahel Gebreyesus said. "Girls and boys stayed more in groups." Still, students embraced their similarities through mutual interests. "She's really funny, and they all have cool phones," sophomore Jane Lee said about her assigned student, Akane Negishi.

There were rough patches in communication between Blair and Kaichi, according to students. Sophomore Rachel Chen acknowledged that she often became nervous talking to her assigned student. "I just kept blanking out," she said. Kajiuta cited a similar problem among his classmates. "It is a little difficult, but we're getting there," he said.

Moose, Seat and Zoll all hope that the visit will become an annual tradition. "For it to become a sister school would be great," Zoll said. Seat also identified potential ways to improve the connection between students for future visits. "We could maybe structure it more and incorporate ice-breaker activities," he said.

Moose saw the event as a great opportunity for both groups. "I think we created more interest for international studies," he said. "It was just a wonderful experience in general."

Editor's note: Quotes from Kaichi High School students were translated from Japanese to English by Blair students and teachers.