On Monday, 25 students from Fujishima High School in Fukui, Japan, visited Blair for the day. For the past three years, Blair has also hosted students from Kichinis, another Japanese school from Tokyo, Japan. 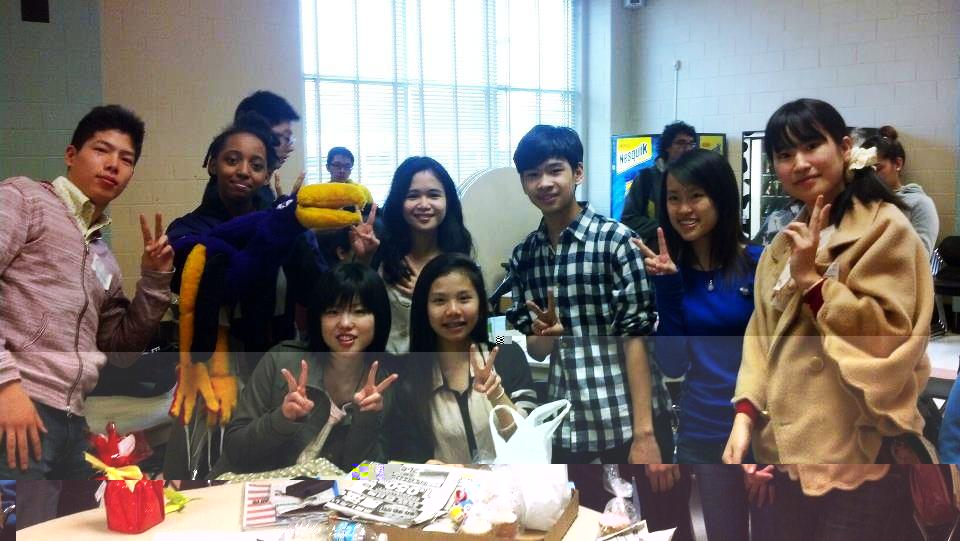 Photo: Blair and Fujishima students gather together for a photo.

Photo: Blair and Fujishima students gather together for a photo.

In the past, when students have come from Tokyo, the Japanese students have shadowed Blair students for the day. Monday's visit was almost exactly the same as previous ones. "Blair kids escort Japanese kids all day. The Japanese [students] visit a class or two, and they go to lunch," Moose said. At the end of the day, there was a closing ceremony in the Student Activity Center (SAC). "Students sing songs, [play] paper sumo wrestling [and put on] random acts," Moose said. In the SAC, Japanese students and Blair students also gave each other gifts and ate different ethnic foods. "Students exchange small presents," Blair Japanese teacher Yoko Zoll said. "Some students will bring food."

Blair students also sang American songs for the Japanese exchange students as part of the closing ceremony. "They will be singing "Help!" "Let it be" and "Waving Flag" in the SAC at 1:30 p.m." Zoll said.

Before the Japanese students were at Blair, they visited touristy areas such as Washington, D.C. and N.Y. "We went site seeing; we saw Metropolitan museums, Smithsonian museums, Columbia College [and] the Japanese embassy in America," Yuki Tanaka, senior Arizona Guzman's exchange student, said.

The one difference with this foreign exchange from previous ones is that, this year, Blair students prepared a video for the Japanese students. "Level two students are making a video about Blair and Silver Spring that will be showed in the SAC," Zoll said. Sabrina Mendoza, a junior studying Japanese at Blair, also noted that conversation with the Japanese students from Fukui was simpler than that with previous exchange students. "It was more easy to communicate with them; they know way more English," she said.

Moose explained that the exchange program extends classroom teaching. "We like that it gives Blair kids a chance to see what they're learning – to see that what they're studying is relevant," he said. Moose feels that the program is beneficial to both Blair students learning Japanese and Japanese students learning English. "Japanese kids get to practice English, [and] Blair kids get to practice Japanese," he said. Mendoza also enjoys what she gets to share and learn about different cultures through the exchange program. "I like getting to know Japanese culture and Japanese life, and I like introducing Japanese students to American life," she said.

Moose hopes that the exchange with these Japanese schools will keep going in future years. "As long as they have patience, we can continue for years to come," he said. Junior Jeremy Salazar, a Blazer studying Japanese, hopes the program will continue as well. "I hope Blair keeps doing this because it's a very good way to connect with different cultures," he said.