Jared Diamond, the author of the acclaimed novels "Guns, Germs and Steel" and "The Third Chimpanzee," promoted his newest book, "Collapse," and held a brief question-and-answer session at the DC-based bookstore Politics and Prose on Wednesday Jan. 18. 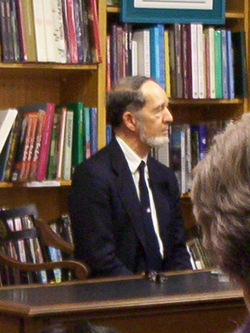 Diamond, whose books are used commonly throughout the Blair academic curriculum, particularly in world history and anthropology classes, discussed the themes in "Collapse." His book focuses on the factors behind the fall of civilizations in the past and how society can learn from these mistakes. "Why did the most advanced people in the world abandon their cities?" he questioned, emphasizing the inquisitive nature of his book.

James Mogge, an AP world history teacher, feels that Diamond's novels and PBS mini-series have helped convey many concepts to his students that would have been difficult to teach. "I'm looking forward to using his theories in class this semester... there are different perspectives of human development," he explained.

Among the factors discussed during the event were over-population and the destruction of the environment. "Today we are still struggling with the problems of the environment, forests, fish... ," said Diamond, noting similarities of the struggles in modern society versus those thousands of years ago.

During his lecture, Diamond brought up many controversial issues, such as tax breaks used in China as incentive for population control. "A bold attempt to deal with the problems of population," he said.

In Blair's classrooms, Diamond's theory is preferred over other theories of civilization. "He incorporated a lot of different types of information including biological and cultural," said Mogge.

While Diamond's lecture was mostly an over-view of his books, he touched on how past societies have not realized their mistakes, relating Mayan societies to the United States government. "[Societies] were not motivated to solve society's broader problems," he said, "Until it was too late."