Blair alumnus has strong ties and tunes in Silver Spring

For Marcus Johnson, Silver Spring is more than just his hometown. It is "the wind beneath my wings," says Johnson, who graduated from Blair in 1991, and set up an award-winning music label a few blocks away which is a key component of Saturday's annual Silver Spring Jazz Festival. 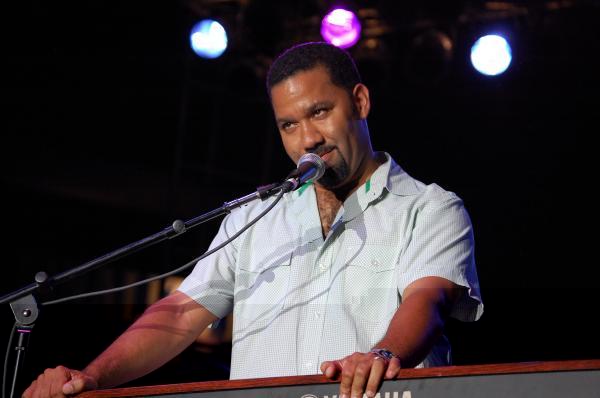 Photo: Blair alumnus Marcus Johnson plays a few smooth tunes for the audience at this year's Silver Spring Jazz Festival, which included four other bands who performed for the crowd.

Photo: Blair alumnus Marcus Johnson plays a few smooth tunes for the audience at this year's Silver Spring Jazz Festival, which included four other bands who performed for the crowd. Photo courtesy of Julia Seiger.

The acclaimed jazz pianist continues spicing up the local jazz scene, performing in the fifth annual festival, to be held tomorrow from 2 p.m. - 10 p.m. on the corner of Colesville Road and Georgia Avenue. The festival, an idea he and a friend drew up in 2004, has become Silver Spring's annual flagship event which typically attracts thousands of fans. His accomplice, Susan Hoffman, put it all together and made it "what it has become, with the help of an awesome community," Johnson says.

Johnson's tenth album, "The Phoenix," produced last summer, has become another hit, reaching number six on the Top Ten of the Billboard Contemporary Jazz chart. Even though Johnson's gone on to accomplish musical milestones sharing a stage with both Erykah Badu and Diana Krall, he claims his success is rooted in the Silver Spring community, and more specifically, at Blair. It was in Blair's music department that Johnson developed a passion for piano which was instrumental in harnessing Johnson's love of jazz. "It was fun to play for assemblies that the school had," he says. "Thus at Blair, I first learned that jazz was beyond just the music. It was a lifestyle away from hip-hop."

While participating in the Blair music program, Johnson learned to love the culture of school and music. In addition, he was able to develop friendships at Blair that have perpetuated past graduation. An active force in the community jazz scene, Johnson has donated money and assisted in various sessions with the Blazer jazz band. Furthermore, using his talents to give back, Johnson is helping build and design a recording studio here at Blair, according to music teacher Dustin Doyle. "He's a great guy, very charismatic and caring. He's devoted to music and music education," Doyle says.

More than just a music man, Johnson set up a definite goal to start a music label back in the '90s. After he got his gear as a piano and jazz student revved up at Blair, he attended Georgetown University. Earning an MBA there enabled him to craft a 100-page business plan, which he marketed funds for to then build a studio and earn a distribution deal. The end product was his label, Three Keys Music, which opened for business in 1998. "I'm in the process of listening and learning about how we can make the company better every day," Johnson says. Right now, he is reading Napoleon Hill's "Think and Grow Rich" and he recommends "it to any Blazer that desires money, success and overall happiness with a great state of mind." 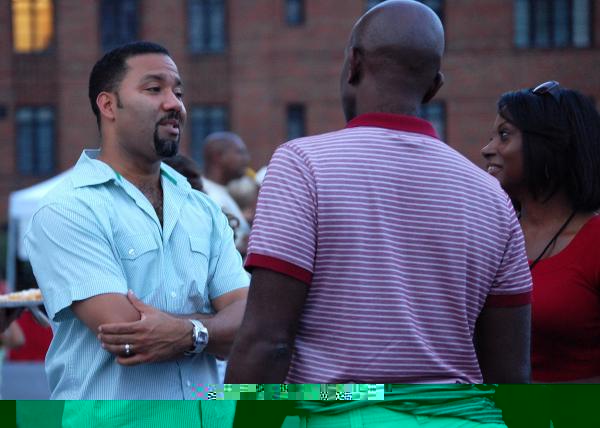 Photo: Marcus Johnson mingles with a couple of fans before his performance at this year's Jazz Festival.

Photo: Marcus Johnson mingles with a couple of fans before his performance at this year's Jazz Festival. Photo courtesy of Julia Seiger.

Success did not always come easy for Johnson, who says despite the triumph of ten albums, it has been a tough period for the jazz industry. Johnson notes that it has been a struggle for him to build his brand amidst a money-based music industry. Still, there is a lot that jazz enthusiasts can look forward to besides the festival: "hotness," he says. On Tuesday, Johnson launched a new series called the "FLO (For the Love Of)." The series includes three new CDs that will available nationwide exclusively through Circuit City. Staying faithful to his roots, Johnson shared it first with the community through launch parties held in the D.C. area.

For now, the Silver Spring community is ready to see Johnson have fun with the festival, which is expected to draw 25,000 people this year, according to a Hoffman estimate. The maverick, whose business label is going strong and whose rise as a prominent jazz pianist is accelerating, says that he is grateful to the Silver Spring community, without which, Johnson says, "I would have never made it this far and there would be no possibility of making it where I'm going."

The Silver Spring Jazz Festival will be held Sept. 13 between 2 p.m. and 10 p.m. in the parking lot of the Lee Building, located in Downtown Silver Spring at the corner of Colesville Road and Georgia Avenue.