"For the record, I don't rap, I chat with rhythm," Jin declares on "Mr. Popular." The self-proclaimed "nicest Asian to ever lift the mic" rhythmically discusses his views on modern hip-hop on his latest release, "The Emcee's Properganda," a successful tribute to rap history.

To hip-hop fans who know "106 & Park's" Freestyle Fridays on BET, the name Jin is a familiar one. The rapper was signed to the Ruff Ryder clan shortly after being inducted into the Freestyle Fridays Hall of Fame. Unfortunately, Jin's first album, "The Rest is History," was an obvious departure from his true personality, and his passionately pure lyrics were scrapped for the guns and thuggery synonymous with the Ruff Ryders. Jin was thus shunned by disappointed fans and mocked by his peers.

In order to reinvigorate his rap career and eliminate the negative stigma surrounding his debut album, Jin was re-born as "The Emcee," a politically conscious hip-hop historian. Whether rapping as Jin or The Emcee, the Asian freestyle specialist can spit meaningful rhymes with a knowledge of his art rare in today's world of widespread unimaginative lyricism. 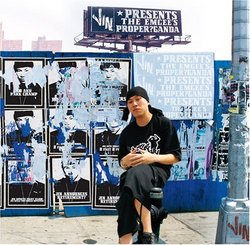 Photo:
Jin's latest release, "The Emcee's Properganda," combines the efforts of Jin and The Emcee into fourteen tracks of straight lyrical fire. The album's opening track, "Perspectives," establishes Jin's "back to the basics" theme, urging hip-hop artists to recognize the impact of their words. "They say hip-hop's fallin' apart/ But that won't stop us from callin' it art/ Yeah, we gotta hold it down as a collective/ And make sure that they see our perspective," raps Jin on the track's chorus.

On the next track, "Top 5 (Dead or Alive)," Jin takes the listener on a lyrical journey through hip-hop history, listing his rap influences and paying homage to some of the best rappers of all-time. The track displays Jin's true respect for hip-hop culture and his knowledge of past rap acts, as he references emcees like Mobb Deep, Wu-Tang Clan, Pharaoh Monche, Ras-Kas and many more.

"Mr. Popular" samples James Brown, while Jin announces that he is "Back by popular demand/ Go each and every place with the mike in my hand." The track serves as a breakdown of the growth of Jin's popularity and how he did not let it get to his head, realizing the music he made to sell records was not true to hip-hop and did not reflect his personality as a person and rapper.

Jin channels Chicago rapper Common on "My First Time," a song about his love of hip-hop. The track, which compares hip-hop to a girl, is a takeoff of Common's "I Used to Love H.E.R." and features a slickly produced and fitting beat.

"Got you brainwashed to think when the album drop/ The first week sales determine if it's hot or a flop," raps Jin on "Properganda." "If it's whack who they tryin' to kid/ Question is, will you pay for garbage, just 'cause a million others did?" Though the track is one of the only poorly produced songs on the album, it serves as the thesis statement of Jin's lyrical essay. Jin provides insight into the negative changes he has observed in hip-hop through his career, expressing his disgust with the deteriorating quality of rap music. He even goes so far as to call out the antics of Houston rapper Mike Jones as part of the problem with hip-hop today.

Jin expresses his annoyance at the legions of fans turned wanna-be rappers and producers on "No More Fans," rapping, "It's like I went to sleep last night and things were all fine/ Woke up, all of a sudden everybody rhymes." Jin wonders where all the fans have gone, and tells the stories of the supposed millions of people who have asked him for help in breaking into the music industry.

Much like "Top 5," "G.O.L.D.E.N." is a track on which Jin shouts out all the producers whose beats have made an impact in rap history, such as Just Blaze and Dr. Dre. Yet the song is also another opportunity for The Emcee to take a crack at the current state of hip-hop music. "Let's take it back to the basics, 'cuz face it/ Nowadays it's all about the beats, lyrics are wasted," raps Jin, who calls beats the "fifth element of hip-hop." The lyrics show his disappointment with the selectivity of today's listeners.

"Thousand Sold (Part 2)", the sequel to The Emcee's single, "100 Thousand Sold," tells the story of Jin's rise in the music business and shares his reasons for rapping. "Only way I'll flop/ Is if I ever stop affectin lives/ I got a point to get across/ Now whether one person get it or a million the message isn't lost/ Of course I want plaques that's certified diamond/ But more than that I just love rhyming," rhymes Jin.

The beats on the album are impeccably produced by 16-year-old producer-prodigy Golden Child, whose tracks ring similar to those featured on Dilated Peoples' album, "Expansion Team." The Jin-Golden Child duo has produced an album's worth of true hip-hop. The Emcee has reestablished himself not only as a freestyle specialist, but also as a force to be reckoned with in the rap game.