Blazer does not advance to final round

Senior Sebastian Johnson finished second on Jeopardy Teen Tournament in his semifinal round in an episode that aired yesterday, Feb. 13.

Though he failed to proceed to the final round, he still received a $10,000 prize for advancing to the semifinals. He placed second to Matt Klein, a baseball player from Pittsford, New York. 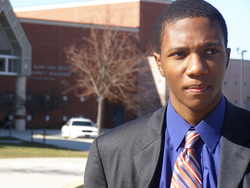 After advancing as the wild card contestant, he began the semifinals strong and took an early lead. However, a wrong answer to a $1,000 question put him in last place. This left him with only $800 as of the first commercial break, $2,000 less than both of his opponents had.

Johnson improved his bankroll, correctly naming "An appointed hour to play golf" as a "Tee time" for a $1,000 Daily Double. After the first round he remained in third place with $3,600.

His Double Jeopardy play was not much better. He answered only four questions correctly, leaving him with $6,800 going into Final Jeopardy. The final question was, "Since 1776, it has been the only U.S. state to be the most populous state for more than a century." Despite having the only correct response, "What is New York?" out of the three contestants, Johnson ended the game with $13,599, but he still fell short of Klein who had an insurmountable lead of $22,000.

Johnson was satisfied with his experience and had only one minor regret. "I had a lot of fun and enjoyed meeting others contestants," he said. "It was just frustrating not to be able to ring in as fast as other competitors."

Phillip Allen. Phillip Allen is a CAP junior who basically is a fascinating kid. Though he possesses little writing ability he was accepted to both the Communication Arts Program and now Silver Chips Online. He follows the Washington Redskins, Wizards and Nationals religiously. He plays soccer (for … More »