How McAuliff braved the winter cold during her week-long protest

After school ends, junior Jordan McAuliff puts on layer after layer, preparing to spend the night in a place without heat. As the sun sets and the night turns colder, McAuliff completes her homework by lantern. She then prepares to brave the cold of sleeping in an unheated boat cabin in early December. This was how McAuliff spent her week living on a boat in protest of the climate crisis.

From Dec. 2 to Dec. 6, McAuliff lived on a boat to advocate for climate activism. Planning her protest only a month ahead, she hoped to bring a greater focus on climate change. "I did this because I feel this really strong sense of pressure and dread and anxiety around the climate crisis every single day," McAuliffe says. 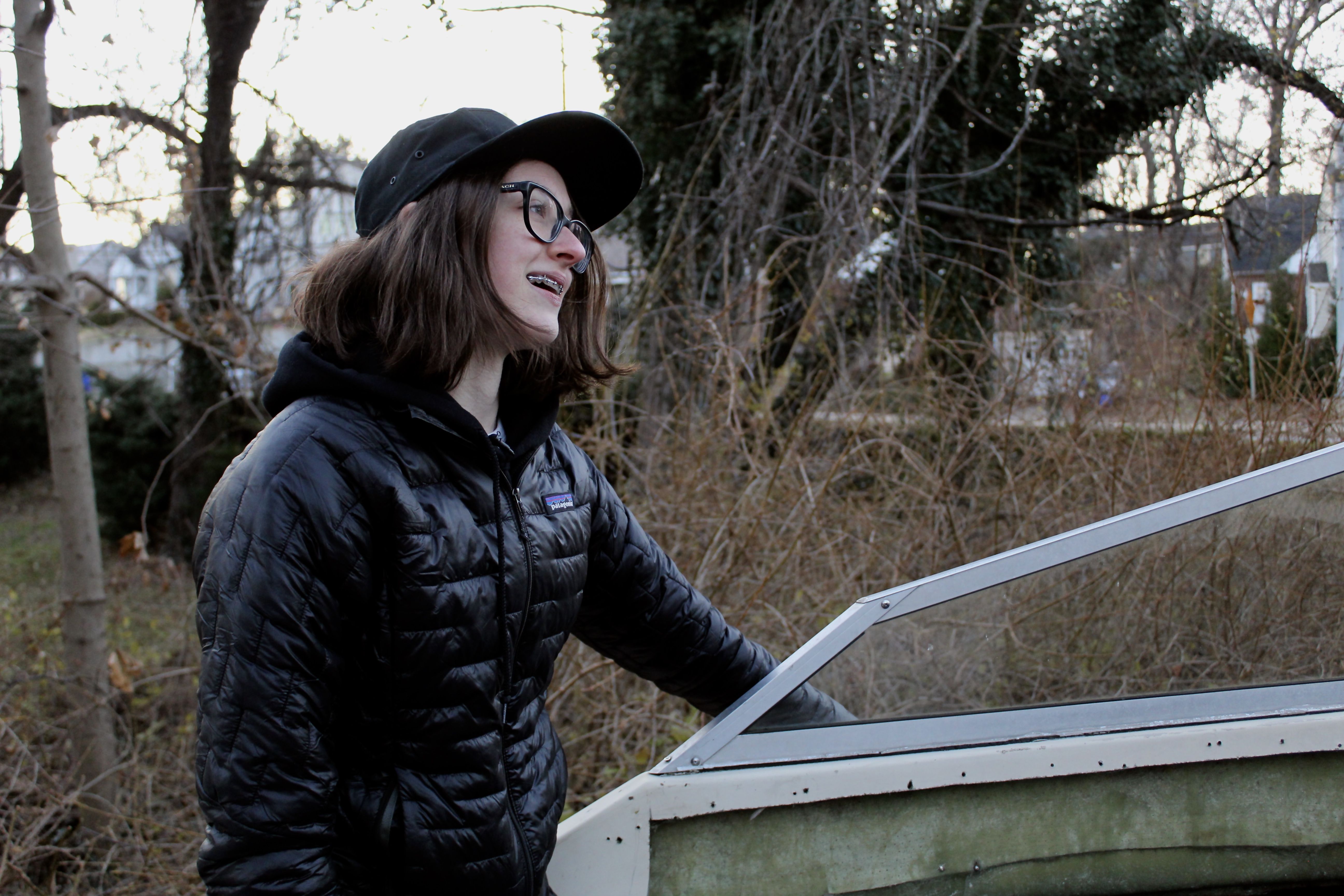 Photo: Student climate activist Jordan McAuliff is living on a boat to protest the climate crisis (courtesy of Isabelle Megosh).

Photo: Student climate activist Jordan McAuliff is living on a boat to protest the climate crisis (courtesy of Isabelle Megosh).

McAuliff became motivated to protest after returning from a climate activism event. "I had been talking to another young activist at this protest, who was talking about some of the personal things that she was going to do in her community and that really inspired me to say that I wanted to make this personal sacrifice," McAuiff says.

After brainstorming ideas on how to protest, McAuliff decided to live on a boat, feeling it represented a possible future reality. "I decided to live on a boat because the boat for me symbolizes the fact that the waters are rising," McAuliff says. She also has a personal connection to this protest, since her father lived on a boat growing up, and taught McAuliff many ideals reflected in her climate activism.

McAuliff's father told her that during his time as a lifeguard, the people who needed to be rescued were not those who could not swim, but rather those who swam out too far. McAuliff carries that same sentiment with her climate activism. "That's where the world is right now on climate, because we've gone too far out and soon we're not going to be able to go back and there isn't going to be anyone to rescue us," she explains.

McAuliff bought the boat online with the help of her family. "Jordan found someone who could give the boat to her and I helped her with the paperwork and whatnot so that she could transfer it legally to her name," Michael McAuliff, Jordan McAuliff's father, says. Jordan McAuliff is grateful for the help she received from her friends and family, as they have not only helped her with the financial parts of the protest but also stayed with her for long periods of time when she was living on the boat to ensure her safety. "My parents and my uncle especially were really big helpers, as far as staying there when it was really late, moving the boat and giving me last minute support I needed. My fellow hub leaders also took shifts with me when I was asleep, until midnight when one of my parents would come," McAuliff explains.

McAuliff's parents were supportive of her protest, but wanted to make sure that she stayed safe throughout the week. "We were willing to let her do this protest but we weren't going to send her off into the night by herself. So she organized a lot of nighttime watches so that there was always somebody with her or right outside," Michael McAuliff says. While the supervision did make McAuliff's family feel better about her protest, they still worried over McAuliff's wellbeing during the week. "Mostly I was just concerned that she'd be cold and hungry in there because it's not a comfortable environment during the winter with no heat," Michael McAuliff says. 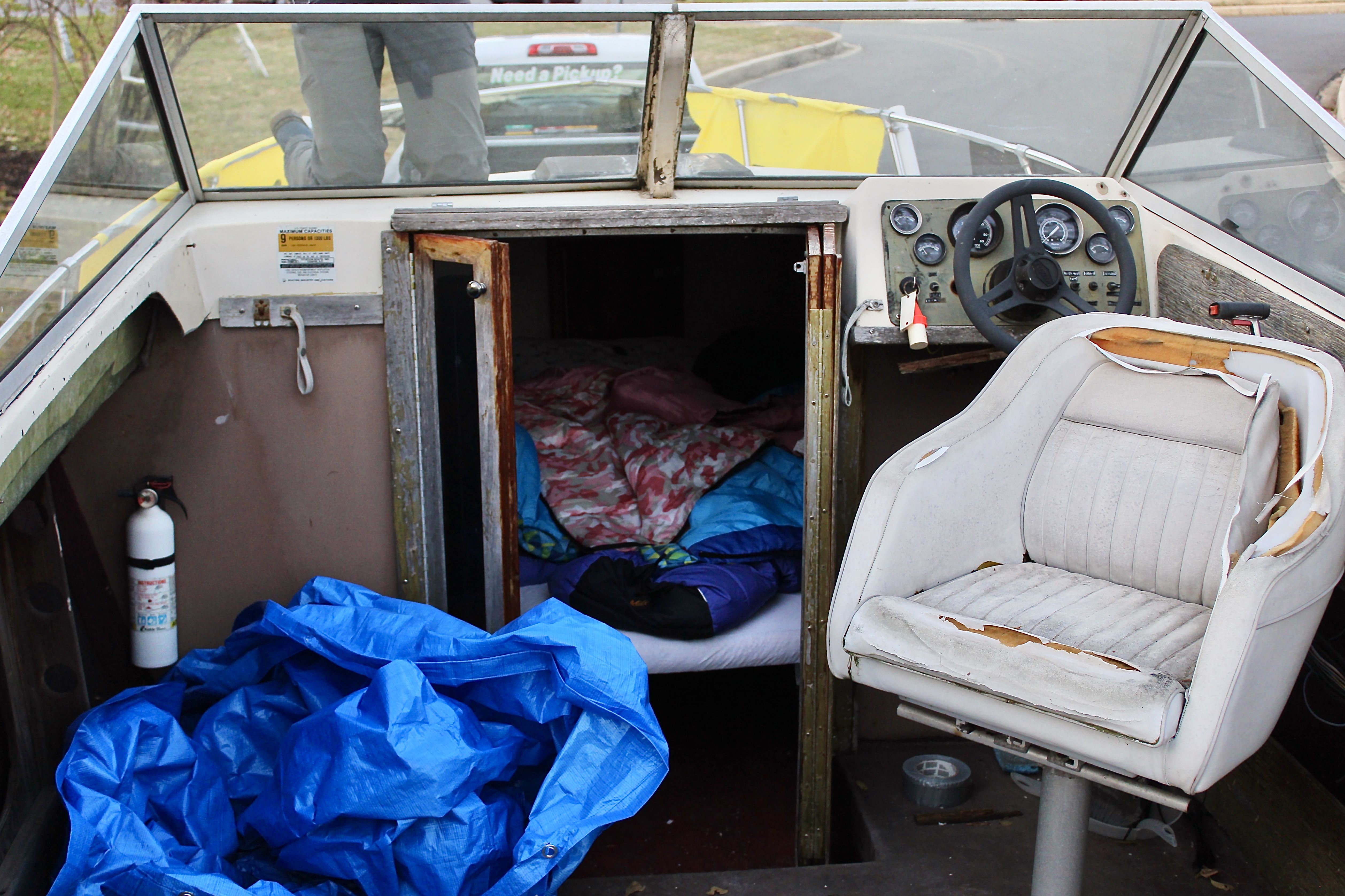 Photo: The interior of the boat Jordan McAuliff sleeps in for her week long protest (courtesy of Isabelle Megosh).

Photo: The interior of the boat Jordan McAuliff sleeps in for her week long protest (courtesy of Isabelle Megosh).

During the week, Jordan McAuliff struggled to balance her schoolwork and her protest. While she feels it did not impact her grades in the long term, she realizes how lucky she is to be able to do her schoolwork easily. "I had to juggle changing into my warm clothes before I left at the end of the day and doing my homework by trying to connect to a mobile hotspot or using a lantern. It definitely made me more conscious of my own privilege," McAuliff says.

McAuliff is also a leader of the local Sunrise hub, which is part of a movement dedicated to getting young people to protest against the climate crisis. As a local leader, she felt it was important for her to show she was dedicated to her cause. "This was proving through an act of personal sacrifice, that if I'm going to ask you to make sacrifices for the movement, I need to show you first how committed I am," McAuliff explains.

McAuliff briefly brought the boat to Blair, filming a video about her goal for the protest on the local Sunrise hub Twitter. After, she parked the boat in a neighborhood near Blair so she could still walk to school. She updated followers on Twitter about her status throughout the week not only on how she was doing, but also on why she was leading her protest and giving thanks to those who helped out.

While McAuliff was open to coverage on her protest, she did not actively seek out news outlets. "I specifically chose not to reach out to national press because I didn't want people to think that I was doing it just to get my name in the news," McAuliff explains. News organizations such as Vice and Capital News Service did report on her protest, but had reached out to McAuliff first. "She was more interested in having her classmates aware of it than having a greater sort of media impact because she wasn't after that," Michael McAuliff says.

McAuliff hopes that her protest will lead to more people speaking out against climate change in the future. "We can't keep going about business as usual, we have to stand up and make a really bold statement about this before it's too late because we're running out of time," McAuliff says.