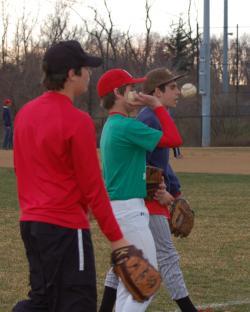 Photo: Junior varsity baseball players throw balls into a bucket after loosening their arms up so that they are less likely to get injured.

Photo: Junior varsity baseball players throw balls into a bucket after loosening their arms up so that they are less likely to get injured. Photo courtesy of Molly Brune.

Coming off an even 7-7 season of last year, the junior varsity baseball team consists mostly of fresh faces led by sophomore co-captains Ben Hukill and Elliot Meyerson. Though nine of the 15 players are freshmen, head coach Richard Porac is confident in his team's ability to excel, calling the squad "very competitive, but very young." Many of the freshmen have extensive baseball backgrounds, and some members of the team have been playing together since they were eight years old.Because of this experience, the junior varsity team this year is fundamentally sound, and the squad's strength lies in their depth and pitching. Porac's goals for this season are simple – for the team to win more games than they lose, to have his team get better as the season goes on and to get his young players more prepared for their varsity careers. 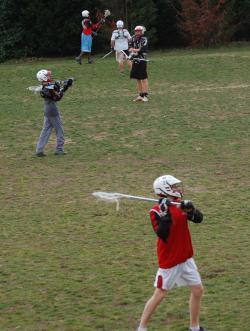 Photo: The junior varsity boys' lacrosse team warms up by passing the ball back and forth with partners.

Photo: The junior varsity boys' lacrosse team warms up by passing the ball back and forth with partners. Photo courtesy of Molly Brune.

The junior varsity boys' lacrosse team has started their season with a bang, winning their first two scrimmages against Richard Montgomery and Northwest, and head coach Adrian Kelly holds an optimistic view for the the upcoming season.During the past two scrimmages, Kelly observed that the team's defensive tactics are more solid than their offensive strategies. "We look defensively better right now," he said. "We need to work on ground balls and offensive stickwork," Kelly said.

Kelly's primary goal this season is to have his athletes gain experience on the field through competitive, intense play. "I'm just looking for the players to be competitive, to run out there and be energetic," he said. "I want them to have a good attitude, and I want them to work hard." But while the team is out there, Kelly still wants to win. "We just want to compete. But we compete to win," he said.

The team has a lot of potential, according to Kelly. "I know a lot of them that play well on the field," he said. Both freshman goalie Robert Durban and sophomore long-stick defense David Amaya pose great threats on the field, Kelly said.

Kelly hopes that the players' experience on the junior varsity team will improve their skills and prepare them for the varsity lacrosse team. "We're still working on technique and trying things out," he said. "But eventually I want to get the players to develop their skills to move up to varsity."

Junior varsity lacrosse programs have been introduced to Montgomery County High Schools for the first time this year, marking a milestone year for Blair's girls' team. Head coach Mairead Hunter aims to turn the players' inexperience into a fun, competitive season by focusing on teamwork and basic skills. "I want to get a lot of the players exposed, learn essential techniques and have more playtime on the field," she said. "Then the players will really be ready to play competitively on the varsity team."Although the squad lost to Richard Montgomery during a scrimmage last Monday, it was a worthwhile experience that allowed the players to see their mistakes, according to Hunter. "The girls really held up their ground," Hunter said. "We need to learn how to be calm on the field and work on how to move into position."

Hunter hopes to have a competitive season, but is also focused on developing positive attitudes in her athletes. "Of course we want to win," she said. "But I want them to be prepared mentally and learn how to react positively to losses."

After a winning 10-3 record last year, the junior varsity softball team returns strong but lacking one main component: experience. The team lost all but one returning player - sophomore captain Rachel Gelfeld - to the varsity squad or other reasons. "We lost pretty much the whole team in terms of players," Gelfeld said. But under the guidance of Gelfeld and fifth-year head coach Kristin Werdann, the team is confident in their ability to post another strong season this year. 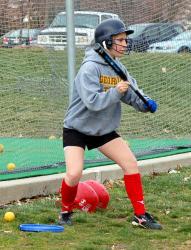 As the only experienced member from last year, Gelfeld admits that there is a lot of work to be done. "We definitely have a long way to go," she said. "Right now we're working on basics like throwing and catching." Werdann also sees the lack of experience as a major setback. "We are a young team with very little softball experience...that is our main weakness," Werdann said.But what the team lacks in experience, it compensates for with hard work and cooperation. "Our strength is our potential, positive attitudes, and work ethic," Werdann said.

Under Gelfeld's guidance, Werdann believes the team can quickly improve. "She is a very strong pitcher and a good leader," Werdann says of her captain. "We are looking for her to help mold the younger, newer players into the type of player she is."

Despite the drawback of inexperience, the team's potential and strengths give Werdann confidence for a good season. "The girls have improved so much already and at this rate we will have a solid team by midseason," she said. Gelfeld agreed with Werdann, voicing hope for the upcoming year. "I'd like to see us break the record from last year because we really have potential," Gelfeld said.

But Werdann also looks beyond simply a good record this upcoming spring. "I hope the girls improve their knowledge of the game and find a love for softball by the end of the season," she says.


Emily Hsiao. Emily is a Magnet senior who is extremely scared of pokes. She enjoys wasting her time watching Asian dramas, listening to Chinese music and reading novels late into the night. She loves to make her friends happy and doesn't mind when they laugh at her … More »