Juniors Elena Gooray and Melissa Mergner took first place in Maryland for the annual nationwide National History Day (NHD) competition on April 26 for their documentary "Forgotten War, Unforgettable Aftermath: Legacy of Conflict and Compromise in the Korean War." The team will continue to the national round competing against 100 other contenders from all 50 states at the University of Maryland on June 19.

In addition to their gold first place medal, the Blazers were given the Emily Hoffman award. The award recognizes the most progressive project in each division and rewards the two with a $100 prize to split. 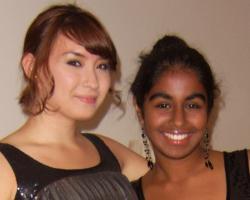 The Maryland competition included 16 entries in the senior documentary division of NHD, allowing the top two teams to continue to nationals. Each project was rated by a panel of judges who critiqued and evaluated each documentary with comments and suggestions for improvements. The judges then selected the top four documentaries, and the projects were sent through another group of different judges who announced the winners.

NHD is divided into two sectors, the junior and senior divisions, which reflect the middle school or high school levels of the contestants. Within each age group, contests are split by type of project, including documentary, paper, website or presentation. The documentary division is also split into individual and group projects.

Gooray and Mergner first considered entering NHD when their interests for the Korean War combined in their first semester Research Methods class. The Research Methods course requires each student to collect research on a specific question and create a final project. Because of their shared interest, the two decided to work together on the final project and use their research as a back to writing a script for the documentary they would create for the NHD competition. After completing the script, Gooray and Mergner collected additional information and images for their ten-minute documentary from the National Archives and Congressional Library.

Despite the long hours and hard work the project required, the two girls were thrilled and anxious for the upcoming national competition. "We're definitely excited to continue to nationals," Mergner said. "We're just waiting to see the last of the judge's comments so we can make the proper adjustments to our documentary before the 19!"

Junior Corinne Ducey also reached the state level for her research paper on the women's suffrage movement but will not continue on to the national competition.