Every so often, I'll be a nerd and just perch in front of my computer, reading the latest national news and checking poll numbers. In an effort to avoid starting an essay, I wen on to FoxNews.com, wanting to see how Obama was faring in the election according to a media filter that was somewhat detached from reality. The latest updated article on Obama on the FoxNews site was a news story about how Obama had declared to Ellen DeGeneres that he was a better dancer than McCain. The first line in the article read, "They really will do anything to win." 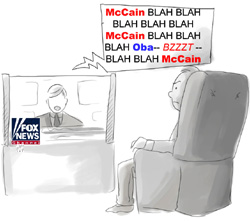 FoxNews, a notoriously conservative station, has left no uncertainties as to where they stand in this election. This past summer, the station had to apologize for changing Obama's name to "Osama" on a news ticker, an incidence they claimed to be an accident. Fox's heavy hitter, Sean Hannity, has made perfectly clear, on several occasions, how he's not necessarily going to "Barack the vote."

To be fair, out of the two candidates running for office, Obama has received way more love from the media than McCain. Celebrities such as Ben Affleck, Oprah Winfrey and Matt Damon have practically made a sport out of endorsing the Democratic candidate. Media outlets from The New York Times to journalist Gwen Ifill, the moderator of the second presidential debate, haven't exactly hidden their excitement over the Illinois Senator's bid for presidency.

But even though the heavily biased political punditry makes for great entertainment, it makes for bad reporting. It's the responsibility and sole purpose of the media to report the news and the facts; not the opinions and tirades of their disgruntled anchors. While it's exciting that this election has people revved up about our 26th Amendment, a greater feat for the general voting public would be to make decisions and form ideas on their own, without media interference.

Regardless of which candidate we support in the election, what's important is that we're able to make the decision based on our beliefs and on the issues. Whether we choose to support and vote for Barack Obama or John McCain, it should be because the candidate has spoken to our ideals and our political beliefs and not just because some anchor in a bad polyester suit told us to.