Walter Johnson seizes the win in a close 2-0 match

Blair's JV field hockey team (2-7) fought valiantly against the Walter Johnson Wildcats in a 2-0 loss on Monday, rushing to block corner plays and throwing fierce tackles on players advancing at midfield. The Lady Blazers too often resorted to knocking balls straight down the middle and failed to keep pace with Wildcat forwards, who scored both goals in the second half. Despite a strong outing, Blair was unable to take advantage of opportunities within the scoring circle. 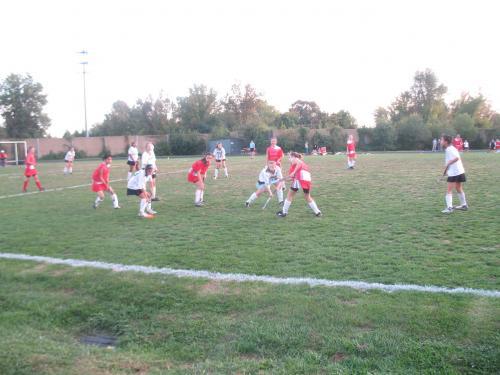 Photo: The JV field hockey team battles with Walter Johnson for possession of the ball. The Blazers lost, 2-0.

Photo: The JV field hockey team battles with Walter Johnson for possession of the ball. The Blazers lost, 2-0. Photo courtesy of Lauren Kestner.

Substitute head coach Erin Bowers commended the team for their effort, but indentified several weak areas that could be improved. "We played well," she said. "But we need to get better at playing the ball on the outside, instead of straight up the field."

The opening minutes of the first half constituted a fierce back-and-forth battle at midfield. Sophomore midfielder Lyla Shapiro started the game strong, penetrating the Wildcat defense with a fast drive down the middle, but lost possession as she neared the shooting circle. The Wildcats launched a swift counterattack after powering through strong tackles at midfield to distribute the ball up the sideline. Walter Johnson's speedy forwards quickly took possession, driving the ball around Blair defenders to send a dangerous cross into the shooting circle. Freshman Helen Bowers and junior co-captain Annie Buckley combined to prevent a score, each clearing the ball after successive crosses into the semicircle.

Blair's offensive force frequently lost possession on free hits and sent balls directly down the field, rendering a formidable Blair attacking force incapable of entering the shooting circle. But their drives through the Wildcat defensive line improved rapidly as play progressed in the second half. Late in the second half, after making an impressive block on a corner play, Shapiro quickly advanced the ball to midfield, evading countless defenders to send the ball wide to freshman Elizabeth Noxon. Faced head-to-head with several defenders, Noxon unleashed a skillful fake to elude the Wildcats and send a pass back to Shapiro, but she was unable to convert the opportunity for a lead. Blair and Walter Johnson were deadlocked at halftime, 0-0.

The Blazers suffered some defensive collapses in the second half, failing to mark Wildcat forwards on a free hit play outside the shooting circle. After the unmarked player hammered a well-placed shot into the cage, the Blair defense reorganized to cover offensive threats more closely in the remaining minutes.

Erin Bowers conceded that marking is an area where there is room for improvement. "We need to work on recovering, getting back around them and marking up," she said in a post-game speech. "I don't know how many people didn't mark on that first goal."

The Lady Blazers combined to create some potent assaults on the Wildcat defensive line later in the second half. Blair's best scoring opportunity came when Noxon took possession of the ball on the left sideline and evaded defenders to send a pass to sophomore co-captain Lauren Rust. Noxon received the ball back from Rust and advanced towards the circle, but was stopped before she could fire off a shot.

Buckley offered her assessment of the game. "In the second half, we did better at sending the ball up the sides of the field and not just up the center," she said. "We could have done better, but it wasn't our worst outing."

The Blair defensive line allowed another breakdown late in the half. A Wildcat forward advanced down the left sideline, confidently maneuvering around the defense to bring the ball closer to the shooting circle. Unchallenged, the Wildcat player drove towards the center of the shooting circle and knocked a powerful shot into the corner of the cage, bringing the score to 2-0.

Erin Bowers agreed that the Lady Blazers can play better. "We didn't capitalize on all our opportunities when we had it in the circle," she said. "But it's a learning experience."

The Lady Blazers' next home game is Wednesday, Oct. 15 against Northwood at 5:00 p.m.