Approximately 65,000 illegal immigrants graduate from high schools in the United States each year. Though they are prepared, one thing causes them to walk into their futures uncertain, unprotected and unsupported by the nation they call home – their citizenship status. It is time that undocumented youth had their chance to pursue the American Dream, with no status standing in their way. It is time that Congress made the Development, Relief and Education for Alien Minors Act (DREAM Act) a reality. 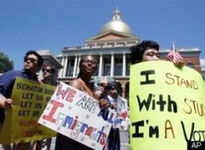 Photo: If passed, the DREAM Act would provide illegal immigrants with a path to citizenship by enrolling in college or joining the military.

If passed, the DREAM Act would provide illegal immigrants with a path to citizenship by enrolling in college or joining the military. Photo courtesy of Associated Press.

If the bill is passed, immigrants will have to either enlist in a branch of the U.S. Military or enroll in an institution of higher learning and obtain a bachelor's degree or higher. They would also need to have entered the States before age 16 and be of "good moral character."

On July 14 students launched the makeshift school "Dream University" in Washington, D.C. The university offers free classes for undocumented youth who cannot afford tuition rates at other schools. Its informal classes also serve as a way to mobilize support for the DREAM Act prior to the fall midterm elections. To further solicit support, students have been meeting with legislators. Hopefully, this will be the year that Congress passes the DREAM Act.

A large portion of the bill's potential beneficiaries have been living and attending school in the U.S. since childhood. These immigrants, who know America as their only home, should not be held accountable for their parents' illegal actions. Not only does the DREAM Act embody the spirit of American freedom, but it encourages youth to use their skills and talents to benefit the community.

According to an article in the McClatchy Newspapers, passing the DREAM Act would reward undocumented immigrants for their illegal behavior, opening "the door to amnesty." But the benefits of the bill would have a "wide reach" across the nation, according to the Migration Policy Institute (MPI).

In March 2009, President Barack Obama gave a speech regarding education reform. "The future belongs to the nation that best educates its citizens," he said. As many as 360,000 illegal immigrants have already obtained high school diplomas and have the education necessary to help the nation progress. It makes no sense to turn away innovative individuals that could help the country prosper simply because of their citizenship status.

The U.S. has invested years into the education of undocumented youth, from elementary school to high school. Allowing immigrant students to utilize America's resources for so long without contributing back to society is what truly "opens the door to amnesty."

If passed, the DREAM Act would grant 2.1 million illegal immigrants under 35 access to higher education and legal status, according to the MPI. About 39,000 immigrants in Maryland would benefit from the bill. Similarly, the American economy would likely experience positive results if the bill is passed. Critics erroneously assume that cheap immigrant labor reduces the job availability of certain fields. However, immigrants often start their own businesses and create job opportunities.

Furthermore, legal citizens have higher wages than illegal immigrants, according to the Immigration Policy Center. If the DREAM Act passes, qualified immigrants would earn and spend more money and pay higher taxes, resulting in increased revenue for the government and businesses.

The United States need not punish illegal immigrant children for their parents' mistakes. It is preposterous for the nation to waste its resources reforming education for immigrants who are prevented from giving back to a society that they have taken so much from. It is time the government realized that granting undocumented immigrants legal status could result in numerous advantages for the nation.

Regardless of status, these indispensable individuals can greatly contribute to the nation. In the face of critical economic conditions, the United States cannot afford to exclude any more of its untapped potential. Congress must wake up and realize that this is the year to enact the DREAM Act.