Keeping up with the beat

Senior Brittany Reyes knows tonight is going to be a good night. She comes home from school and does her homework for the next day. A few of her friends come over, but instead of bidding them goodbye at the end of the afternoon, Reyes heads out with her group. Together, they plunge into a world of singing, dancing and music - the Washington, D.C., concert scene. 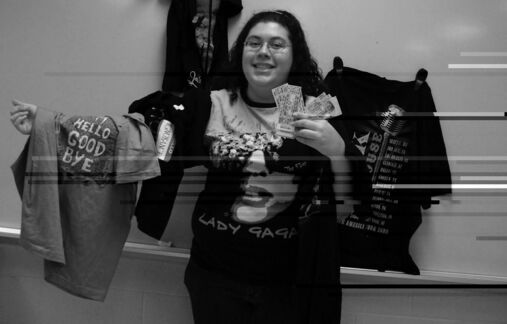 Photo: Senior Brittany Reyes has saved up t-shirts and ticket stubs from concerts that she has attended, including those of artists like Lady Gaga, Pink and Hellogoodbye.

Photo: Senior Brittany Reyes has saved up t-shirts and ticket stubs from concerts that she has attended, including those of artists like Lady Gaga, Pink and Hellogoodbye.

Reyes is a dedicated member of the diverse and thriving concert culture at Blair. She averages three to four shows a month, seeing artists from the Jonas Brothers to Kid Cudi to Secondhand Serenade. While she has made the rounds at larger venues, like the Verizon Center and the Nissan Pavilion, she says she prefers more intimate scenes, such as the 9:30 Club and the Black Cat. Although these smaller clubs serve alcohol and cater to older audiences, they are affordable and available to teens. The establishments' willingness to accommodate young music lovers make the 9:30 and the Black Cat popular destinations for concert-loving Blazers. At smaller clubs like these two, high school-age fans can get close to the crowd and the artists. They can score a cheap ticket, dance and sing along just feet away from their favorite bands and forge memories that last long after the final notes fade away.

For whatever reason they return to their favorite small venues, Reyes and other Blair students began their love of concerts with a lifelong passion for live music. Reyes attended her first concert at age six, when she went with her mom to see the '70s disco classic K.C. & the Sunshine Band. After developing her initial love of music with the influence of her mom she has broadened her taste and tried many genres, including rap, country and pop.

But junior Rian Henry knows exactly what he likes - he says he tends to steer away from mainstream artists and generally listens to alternative groups. Henry attends at least one concert every month and prefers small venues because the more personal atmosphere allows him to get close to his favorite artists, like The Mountain Goats, Julian Casablancas and Destroyer.

At a Julian Casablancas concert, Henry talked and danced with a man and a woman who both told Henry they were fans of the artist. Henry eventually thought he lost them in the crowd. "[Twenty] minutes later, I see this guy on the synthesizer and the girl playing percussion for Julian Casablancas," he says. "I yelled 'Synthesizer man!' as loud as I possibly could to get the guy's attention." The man with whom he had been dancing just minutes before looked down from the stage, smiled and blew a kiss. "Most awesome night of my life!" says Henry.

In junior Janet Henkai's opinion, listening to songs through the earbuds of an iPod doesn't compare to the excitement of a live show. Although she has only been to two shows since September, she attended eight over the summer and plans to see 10 more before the end of this school year. Henkai says she frequents concerts because of the unparalleled charge that live performance brings to her favorite artists, like MGMT, Shiny Toy Guns and Muse. "It makes you appreciate their music more - you know what message they're trying to say," she says. This spirit not only enriches the music, says Henry, but conjures an atmosphere like no other. "The whole reason I go to concerts is for the environment," he says. Despite cramped spaces, high energy and music they love electrify fans. "When you go to a concert, everyone loves who they're seeing, so it's always a party," says Reyes with a grin. 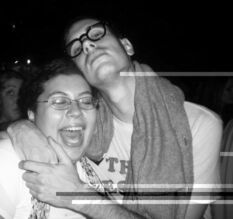 Photo: Reyes smiles for the camera with Forrest Kline, the lead singer of Hellogoodbye.

Photo: Reyes smiles for the camera with Forrest Kline, the lead singer of Hellogoodbye.

And the more, the merrier. Reyes, Henry and Henkai all go to concerts with friends when they can. Henry says that it's nice to share the experience with people that he knows, but he also bonds with strangers in the crowd. Henkai also adapts to the atmosphere - she introduces herself to the people standing closest to her, as she knows they will be sharing the same sweaty, crowded dance floor for the next few hours. But far from viewing such close quarters as an inconvenience, Henkai welcomes the chance to meet other fans with a similar taste in music. She has made friends at concerts with whom she still keeps in touch.

But getting pumped with fellow fans is not the only reason that Henry and Reyes save up their allowance and other money for tickets, nor what motivates Henkai to do chores so her parents will pay for her tickets. All three eagerly anticipate the once-in-a-lifetime experience only possible at small venues: meeting the band.

Up close and personal

Even at a small venue, artists don't have time to see everyone; but sometimes, fate intervenes for one lucky fan. For her 17th birthday, Reyes went to a Hanson and Hellogoodbye concert. The two bands were accidentally locked out of their trailers when Reyes and her friends ran into them. Forrest Kline, the lead singer of Hellogoodbye, gave her a birthday hug and took a picture with her. Reyes will never forget the moment.

At the beginning of this school year, Henkai also attended an unforgettable concert. She and her friends won tickets to see MGMT for free. After the show, the group was able to meet the band and take pictures. She calls the experience "epic."

Henry says his best experiences unfold at venues with musicians like those he met at the Casablancas concert, who make an effort to get involved with the crowd. "It makes me feel like they're not just these distant, imperial celebrities and that I can relate to them on some level," he says. Audrey Fix Schaefer, 9:30 Club spokesperson, explains that connecting to the artists creates an intense energy and anticipation. "Once you pass through the door, everyone's heart is beating fast because they can't wait to see the show they came for," she says.

The chance to get up close and personal with the artists is the best part of small venues. At a smaller venue, Blazers can feel the energy in the air, make friends amid the flashing lights and blasting music in the pit and the hope that they might, just possibly, meet the men and women they came to see.

Even after dozens of concerts, winding down such exhilaration can be disappointing. Once the lights shut off and the stage empties, Reyes always feels a little melancholy - but never for long. Reyes will attend countless more concerts with different artists and different crowds, but the same excitement and the energy will replay again and again.