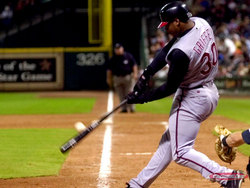 Photo: Ken Griffey, Jr., black baseball player who won every American League Gold Glove award as an outfielder in the 1990s and won the Most Valuable Plater during the 1997 season after hitting 56 homeruns, 147 RBIs and averaging .304.

Photo: Ken Griffey, Jr., black baseball player who won every American League Gold Glove award as an outfielder in the 1990s and won the Most Valuable Plater during the 1997 season after hitting 56 homeruns, 147 RBIs and averaging .304.

Ken Griffey, Jr. is the starting center fielder for the Cincinnati Reds. Griffey, whose father was also a legendary baseball player,
recently entered the 500 Homerun Club and has been playing baseball throughout his life.

He is a 16-year veteran and entered the league at the young age of 19. Griffey immediately made an impact on the league, smashing 16 homeruns, 61 Runs Batted In (RBIs) and a batting average of .264 during his rookie season alone. He upped his stats to 22 homeruns, 80 RBIs and an average of .300 the following year and continued improving until he moved from Seattle to Cincinnati, where his numbers are nowhere near as high as before because of several tragic injuries.

Griffey has won prestigious awards in his stellar career as well. Last year, Griffey was voted to another All-Star game, his twelfth, but could not make it because of injuries. Griffey won every single American League (AL) Gold Glove award as an outfielder during the 1990s and during his 1997 season alone, he won the AL Most Valuable Player (MVP) after hitting 56 homeruns, 147 RBIs and averaging .304.

He has never been seen as a one-dimensional baseball player since, along with his power batting, his defensive range in the outfield has also been greatly admired. Griffey's success is not only limited to the baseball diamond, however. He has won the Roberto Clemente award numerous times - once, after the 2000 season. The award is given to a baseball player who does the most to help the community. Griffey is on the National Board of Directors for the Boys' and Girls' Clubs of America, and his Kids Center provides 200 tickets to Saturday home games for underprivileged youth.

Information has been compiled from allstarz.org.