Sneakers that should return to the NBA hardwood ASAP

A basketball shoe is more than stitched cloth, rubber and paint. Not only does a sneaker have a sole; a sneaker has a soul. The feel, the design and the vibe emanating from a shoe can inspire players to do their best on the court. Players' shoes can speak volumes about their game, their personality and their mood. To the sneakerhead or the avid shoe-wearer, a person's footwear gives insight into their life. Any retro design can be worn to school, but not every shoe deserves to grace the hardwood. So with the basketball shoe industry adding more and more features to the latest styles of baller-approved sneakers, we present a synopsis of the basketball kicks that we'd like to see make a return to the court.

When the first Nike basketball shoes with Shox technology were released, basketball fans everywhere wondered, "What the heck are those things? Springs?" The answer: affirmative. A young Vince Carter schooled those not in the know about the art of high-flying, and his method of transportation? The Nike Shox BB4. The original shox were the perfect shoe for the new millennium. Simple in pattern and colors, yet revolutionary in design, these kicks featured a shiny, sectioned side stripe of gold, silver, blue or black and a rubber toe to help launch the wearer into the dunk-mosphere. Sneaker lovers respect this classic for its creativity, comfy fit and customizability. Boing.

And 1 The Marbury
The original signature shoe from NBA hotshot Stephon Marbury, the Marbury's featured a curly "S" logo that has come to symbolize Starbury's game. The shoe, released less than two years after Marbury was drafted in 1996, symbolized the birth of both Marbury's career and And 1's run as a preeminent basketball shoe company. The sneaker's glossy exterior and catchy colors, combined with the cushioning that has come to be expected from And 1 makes this pair of basketball shoes perfect for serious players. 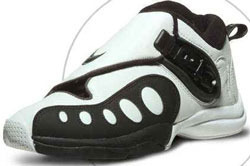 When Nike produced the first signature shoe for Gary Payton, they made sure to reflect his nickname in the shoe. So appropriately, this edition of the Air Zoom Flight line fits like a "Glove." The adjustable interlocking strap over the laces of the shoe create a smooth, clean shoe with a novelty that is more functional than some of the other locks and straps on Nike's releases. In classic black-and-white, the GPs featured a sequence of circles on the outer toe and are similar to the Air Jordan XII. But what sets the Zoom Flight GP apart from similar sneakers is "playability." Indeed, the Glove's signature shoes have been deemed "The Performance Shoes" by sneakerheads.

Reebok Wink DMX
Originally endorsed by Steve Francis, these Reebok sneakers were the picture of basketball purity"comfortable enough to play in and cool enough to wear even off the court. The Winks blended old-school stealth with new-school design. Available in a variety of colors, these kicks featured a shorter tongue and wrapped exterior, along with laces that went unnoticed to the common person. The DMX technology in the sneaker provided ballers with breathe-ability to go with the shoe's sturdiness, and The Franchise's endorsement made the kicks that much more appealing. 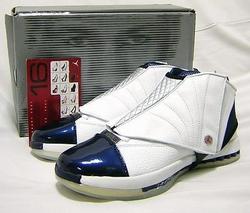 Air Jordan XVI
One of the sweetest Jordan's not back yet, this shoe is sleek and sexy. The removeable shoe flap has some magnets on it so that it won't come off if you choose to wear it. Worn by Ray Allen and Darius Miles when they first came out, these shoes look just as good with the flap as without it. The patent leather at the toe adds a certain element of luxury. The flat bottoms make for comfortable shoes on the court. Another reason these shoes need to come back as soon as possible is because they come in some very suave colors. Black, red and white, a typical three color combo is one choice, as is wheat, grey and white, navy and white, and one of the most unique color combinations in recent memory, maroon, grey and white.

Released in 1997, this shoe was worn by then-all-star Mitch Richmond. Back when Richmond could light up a scoreboard, he certainly lit up the court with his kicks. These saviors of style deserve a comeback. Take a look at how comfortable they look and you'll agree. They have the Nike bubble all the way along the bottom and they have foam all over. The letters A-I-R are written in some loopy but fashionable cursive and add a subtle touch to the shoe. No one can really say what they are but those triangle-things on the side of the shoe are what define the shoe. They make the shoe what it is. Without them these Uptempo's would just be another pair of Nike basketball shoes. These shoes have been underappreciated but its time that they get their due. 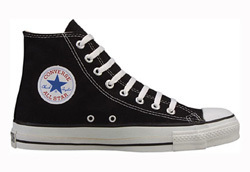 Converse All Star
Before you say I'm wrong, hear me out. A staple on the court during the NBA's early years, Chuck Taylor's have been removed from the court. Worn by enough great players to fill a Hall of Fame ballot, the Converse All Stars are the definition of classic and it's time to bring them back. What greater stars are there other than Wilt Chamberlain, Bob Cousy, George Mikan, Rick Barry and Jerry West - all wearers of the classic shoe. In today's new millennium with shoes with straps, computers and locks on them, a true throwback is just what we need.

Wow. The picture speaks for itself. One of the most popular shoes during their release, these kicks have a lot to offer on the basketball court. The blue coloring and the Nike air bubble on the heel make this shoe so sexy, Kevin Garnett probably wishes he could get his Nike deal back. For a time, the Air Garnett's were the kings of the court, and its time that they make a return.