"Knives Out" is a cutting edge classic

The film is a familiar roller coaster detective story with a unique twist.

The entertainment industry has seen its fair share of whodunnit stories, but none have been quite like “Knives Out.” The original flick, directed by Rian Johnson, spins a cookie-cutter detective story into a much more complex and chaotic tale.

“Knives Out” tracks the events that unfold after mystery novelist Harlan Thrombey (Christopher Plummer) is found dead following his 85th birthday from the perspective of his caregiver and close friend, Marta Cabrera (Ana de Armas). From the anonymous hiring of Detective Benoit Blanc (Daniel Craig) to tension in the dysfunctional Thrombey family, the story twists and turns until audiences come face to face with the realization that this is no normal whodunnit.

The stellar casting for the Thrombey family captures the stereotypical conflicts that many of us run into at the Thanksgiving dinner table. With the loss of their patriarch, the downward spiral of souring relationships between the characters is not only entertaining, but also an incredibly clever way to unwind alibis and reveal the plethora of hidden motives to keep viewers guessing. 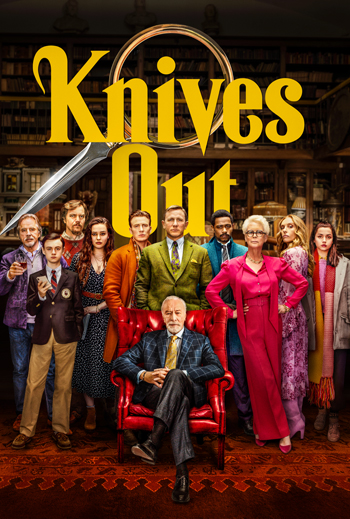 Photo: "Knives Out" is a successful stab at the whodunnit genre.

Photo: "Knives Out" is a successful stab at the whodunnit genre.

Similar to Johnny Depp’s legendary first outing as Jack Sparrow, Craig’s portrayal of the southern Detective Blanc cuts through the story's tension while piecing together crucial information for viewers. His character carefully walks the line between humor and wit, and stands out against the sea of dreary and unrealistic investigators in the detective genre

Chris Evans’ ability to shift from arrogant to understanding as Hugh Ransom Drysdale, the deemed “Black Sheep” of the Thrombey family, brings a surprising and chilling performance. His character’s indifference to his family’s opinions creates entertaining encounters with Blanc and Marta.

This film would not be successful without its simple yet complex setting. Taking place in a puzzle-like mansion filled with trinkets and unique mysterious decorations, “Knives Out” doesn’t require Blockbuster CGI or special effects to create an ominous and mysterious ambiance.

“Knives Out” is a unique film that pays respect to traditional detective stories written by Agatha Christie and Arthur Conan Doyle, tackling the complex process of reaching the truth. With a perfect balance between humor, action, and mystery, it is a must-see original flick.

“Knives Out” is rated PG-13 for brief violence, some strong language, sexual references and drug material and is now playing at Regal Majestic, AMC 18 Arclight Bethesda, and AMC Wheaton.