"Knocked Up" is a knock-out

Summer comedy is as poignant as it is hilarious

Writer and director Judd Apatow has done it again. Mirroring the huge success of his freshman attempt "The 40-Year-Old-Virgin," Apatow has yet again pulled through in a category that seems to be lacking in quality these days. His latest "Knocked Up" provides equal doses of both emotional content and hilarity in what is sure to become the most uproarious comedy of the summer.

Set in Los Angeles, the flick opens with a hilarious slideshow portraying the lifestyle of protagonist Ben Stone (Seth Rogan) and his five slacker buddies, complete with an abundance of cage fights, ping-pong battles and quests to discover as many creative ways to smoke pot as humanly possible. Meanwhile, across Sunset Strip, the ambitious Alison Scott (Katherine Heigl) receives word of her promotion to the position of on-screen interviewer for the E! television network.

The two cross paths at a night club, where Stone is out doing his usual thing and Scott is celebrating said promotion. Several cheesy pick-up lines and many drinks later, the two are back in Alison's pad for what they believe to be a one-night stand.

Wrong. Eight weeks following this little charade, a bout of morning sickness leaves Scott very worried. Twenty positive pregnancy tests later she's finally convinced, and Scott finds herself on Stone's beer-can-covered doorstep to relay the news (she can't reach him over the phone, as he can't afford one). Though Stone is jobless and has less than $900 to his name, the two must find a way to overcome their differences and team up to raise this very unexpected child. While this is a highly unoriginal story line, Apatow offers a new, warm and fuzzy insight into the complicated abyss of impending adulthood and the acceptance of responsibilities. 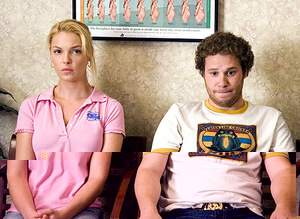 Perhaps the best aspect of the film is its perfect balance of comedic content and touching, meaningful dialogue. While the "awww' scenes are a-plenty, there's also just the right amount of witty dialogue and perfectly timed raunchy jokes to prevent the film from becoming too cheesy. As is also evident in "The 40-Year-Old Virgin," Apatow really is the master of balancing racy sexual content with much deeper, humanistic emotion. In "Knocked Up," this combination proves to be a very entertaining package.

"Knocked Up" also lends much of its success to impeccable casting. Choosing to feature almost the entire crew in "The 40-Year-Old Virgin," Apatow has found a group of people that can really make it work. "Virgin" stars Leslie Mann and Paul Rudd are also primary characters in "Knocked Up," playing Scott's sister Debbie and brother-in-law Pete, respectively, an incessantly bickering couple stuck in a less-than-perfect marriage.

At many points in the film, it's almost as if they are the central focus. Together, they provide the perfect example of exactly what Scott and Stone don't want to turn out like. Mann is perfect for the role: a neurotic, over-protective, stay-at-home mom who constantly questions her husband's loyalty.

Rudd, on the other hand, plays a completely chilled-out guy who takes an immediate liking to Stone and his laid-back personality. Though they share nearly as much screen time as Heigl and Rogan and engage in perhaps even more dialogue, Pete and Debbie's story doesn't overpower that of Scott and Stone, but rather complements it.

The character development of this foursome falls just short of perfect. Surprisingly, the only character who the audience doesn't seem to get to know below the surface is Alison. Though it is obvious to everyone and their grandmother that she can do better than Stone, we never actually see Alison herself having this revelation.

Additionally, she doesn't seem to have a life outside of her job and her sister's family. We never see her speak to any friends, and other than an awkward run in with a group of former classmates, it appears as though she has none. Even so, Heigl is still perfect for the part, though Scott's ambitious, often self-centered attitude doesn't allow the actress much room to branch out from her role as Izzie Stephens on "Grey's Anatomy."

Ultimately, audiences of "Knocked Up" got much more than they bargained for. For a film whose title just screams "low expectations!" Apatow really came through with more than just the expected plethora of bathroom jokes and testosterone-based humor. "Knocked Up" offers a touching, new approach to a well-known tale in a surprisingly delightful comedy that may be the best that the entire summer has to offer. Not too shabby.

"Knocked Up" runs 129 minutes and is rated R for sexual content, drug use and language.