La Bamba: something to dance about

The attraction to this small Mexican restaurant on Georgia Avenue initially begins with the catchy, festive name, but soon develops into more, as La Bamba offers a spectacular blended menu of spicy cultural Mexican food. Unfortunately, while the restaurant's recent renovation is the first step in transforming the dingy interior into a cute and quaint setting, certain elements of the old drab La Bamba still remain, resulting in a dining experience that may encourage certain audiences to "La Bamba" their way out of there.

Mexican soap operas blare on the old television, the windows and chairs have not been washed in ages and the waitresses wear fishnets. But it is obvious that the staff has been making great efforts to improve the look of the place, as the walls glisten with a fresh coat of white paint alongside beautiful large portraits of Latin American villages and countrysides. 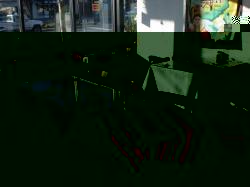 To every diner's satisfaction, the meal does not match the taste of the cheap party-favor-feel of the interior. On the contrary, after ordering two of the most popular appetizers, which arrived incredibly fast, chuchitos and flute tacos, the customer hardly notices the faults of the restaurant, too involved with savoring every last flavor of the meal.

The chuchito, a piece of chicken and mashed chickpeas wrapped in a corn husk, looks a bit apprehensive at first, but soon engulfs the consumer with the spices of Mexican culture, transporting them in an out-of-body experience to a small town on the Western coast with real live Spanish music and authentic Latin art. The husk locks the hot peppery flavors into the chicken, resulting in explosive bites of flavor. A hard act to follow, the taco flute, a hard taco shell covered with fresh tomatoes and topped with parmesan cheese, is equally satisfying and will leave customers craving for more of the La Bamba experience.

With the success of the appetizers, high expectations are held for main course, which also speedily arrives. Digging into the pollo de crème, a chicken dish covered in a cheese-based cream sauce, the customers' shoes will fly off as they are sent back to a Mexican beach, dancing barefoot in the sand while swirling in the thick blend of the cheesy sauce, bread, tomatoes and spicy peppers.

The second dish, pollo con vino y ensalada, is two slices of glistening chicken breast sautéed in white wine with a side of salad. This dish is a bit boring compared to the rest of the food, lacking that Mexican zest which puts all of the previous dishes in the "food to remember" category. The white wine saves the dish from being a complete disaster by providing a savory taste. But don't waste time on the so called "salads," made of chopped white lettuce and sprinkled with thin slices of tomato; stomachs will cringe just by looking at the paltry heap, long before it even reaches the taste buds.

Eating at La Bamba is not only a satisfying experience, but also a fairly cheap one. Costing a mere $25, the meal was well worth the minor discomforts of the atmosphere for a stomach full of mouth-watering Mexican food and a mini Mexican vacation. Although the restaurant is still undergoing some improvements, there is no need to fear if one needs their Mexican-food-fix: La Bamba also does takeout!