Lacrosse cut down by Warriors

It was the same story that has played out again and again for the girls' lacrosse team this year. The Warriors scored easily in the first minute of the game and took off from there. By the end of regulation, the Blazers had been beaten down 2-14 to extend their losing streak to nine games. 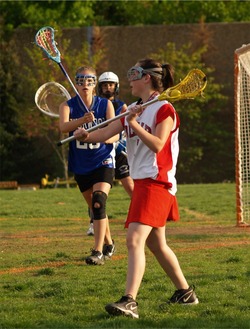 Photo: Junior attack player Dana Ballard looks for an open girl while cradling the ball to maintain control against Sherwood.

Photo: Junior attack player Dana Ballard looks for an open girl while cradling the ball to maintain control against Sherwood.

Blair started off sloppily, unable to complete passes or penetrate the Sherwood defense. There were strong performances by freshman Susie Branson and sophomore Helen Anderson, but the team couldn't keep up with the fast-paced, aggressive Sherwood offense.

The slaughter continued unabated until late in the half when sophomore Rachita Sood drove in and scored her first goal of the season to bring the score to 1-8.

The second half started off well, with an early goal by senior Maddie Driskill with an assist from fellow senior Kiran Belani. There was, however, no chance for a rally. The Warriors responded in kind, keeping up the pressure and scoring six more goals to lock up the game.

The team is still inexperienced, and Coach Mike Horne admits that this is a "rebuilding year," after the loss of several extremely valuable seniors from last year's team.

Despite the loss and their record, the team is still optimistic and in good spirits, according to senior captain Julie Spatz. "The team morale was up and even though we were outmatched we worked together and everyone felt better on the field than we have in other games," she said.

The team's next game will be Tuesday, May 2 at Northwest.