Lady Blazers advance to second round of playoffs

Girls' basketball cruises to a 64-48 win over Sherwood

With Principal Darryl Williams in attendance, Blair's girls' basketball team (12-11) took out the Sherwood Warriors (4-18) 64-48 in the opening round of the playoffs. The Blazers advance into the second round and will face either the Blake Bengals or the Walter Johnson Wildcats on Tuesday, March 3 at Blair.

The Blazers split the season series with the Warriors 1-1, with Sherwood holding the Blazers to a season-low 29 points in their second meeting. But the Blazers were able to find an offensive rhythm this game and turn defensive pressure into fast break opportunities. 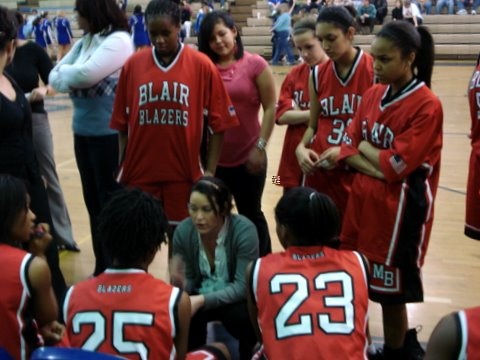 Photo: Head coach Erin Conley talks to her team during a time out.

Photo: Head coach Erin Conley talks to her team during a time out. Photo courtesy of Xin Shan.

The Blazers did not start the game as well as their season closer, allowing the Warriors to jump out to an early 6-0 lead. Senior Ashley Arnold responded by drilling a jump shot and adding two free throws to put the Blazers on the board. Midway through the quarter, freshmen Gabby Smith and Johanna Lopez executed a beautiful give-and-go resulting in an easy layup for Smith. The Blazers' full-court press slowed down the Warriors' offense and allowed Blair to end the quarter with a 16-14 lead.

In the second quarter, the Blazers were able to crack the game open by getting points off turnovers caused by their aggressive defense. Sophomore Janet Henkai opened the scoring by getting a steal on defense and sinking two free throws after being fouled in transition. On the next Blazer steal, Lopez ran the floor and scored after rebounding her own shot in the fast break.

"Our pressure defense was good tonight," head coach Erin Conley said. "We played aggressive defense and were able to cause turnovers because of that."

The Blazers were able to outscore the Warriors 23-8 in the second quarter, including a 6-1 run in the closing two minutes of the half. The Blazers closed the half up 39-22, a solid lead that they would not relinquish during the remainder of the game. 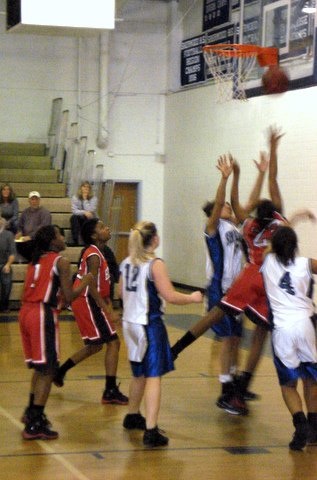 Photo: Freshman Johanna Lopez drives in for a tough shot.

In the opening minutes of the second half, both teams played their best defenses of the game. Only four points were scored in the first four minutes of the third quarter combined as neither team could get open looks at the basket. Still, the Blazers were able to find ways to score later in the quarter. Lopez was a force underneath, commanding the post and creating second-chance opportunities for the Blazers. Lopez finished the game with a season-high 24 points.

The Blazers took a 50-33 lead into the fourth quarter and kept up the defensive pressure. Lopez continued to score near the basket and also get to the foul line, helping cement the Blazers' victory. As the buzzer sounded, the Blazer fans cheered at the team advanced into the second round of the playoffs.

Senior co-captain Saba Aregai noted that the team played a solid game and that they need to keep their intensity throughout the playoffs. "We just played really well," Aregai said. "In some of the later games of the season, we weren't playing too well. But we've stepped it up and we're playing really hard now. We need to keep playing hard if we want to win in the playoffs."

Conley acknowledged the win as an important one and hopes to find continued success in the rest of the playoffs. "We played great, it was a really big win in the playoffs," Conley said. "Hopefully we can keep this up and go far."

The Blazers' next playoff game is on Tuesday, March 3 at 7 p.m. at Blair. The Blazers will play the winner of the Friday, Feb. 27 match-up between Walter Johnson and Blake