The girls' varsity basketball team (3-0) was able to stop a strong rally by the Northwood Gladiators (0-2) to defeat their University Boulevard rival Friday night, 58-55. The Lady Blazers, coming off of two double-digit wins to open the season, used clutch free-throw shooting and scrappy defense down the stretch to hang on for the win. 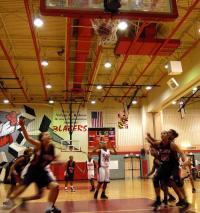 Photo: Senior Ashley Arnold puts the ball in the basket after being fouled by the Northwood defense.

Photo: Senior Ashley Arnold puts the ball in the basket after being fouled by the Northwood defense. Photo courtesy of Julia Seiger.

The Lady Blazers were able to jump out to an early 20-8 lead after the first quarter, but the Gladiators mounted a strong comeback to trail only 30-29 at half. To start the fourth quarter, the Blazers found themselves down 41-42. Freshman forward Johanna Lopez got an offensive rebound and a put-back on Blair's first possession of the quarter and senior Ashley Arnold drained a three a few possessions later to give the Blazers a 45-42 lead. Arnold finished with a double-double, recording 11 points and 12 rebounds.

After an easy Northwood layup cut the lead to one, Lopez made two free throws and stole the ball on Northwood's inbound pass and drew a foul. Lopez added another from the charity stripe to give Blair a 49-44 lead. Lopez finished the game with 12 points and eight boards. Blair's defense picked up their intensity and went on a 6-2 run in which sophomore guard Janet Henkai had a fast-break layup and beautiful assist to Lopez for a basket. Henkai led the Lady Blazers with 16 points. 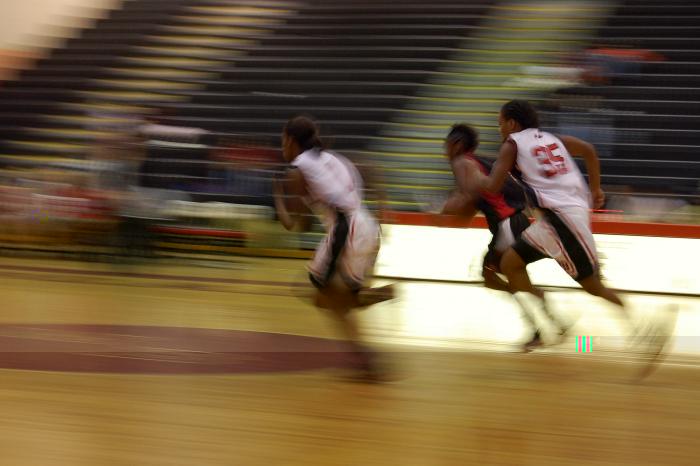 Photo: Two lady Blazers rush to steal the ball from a Northwood player racing to the basket.

Photo: Two lady Blazers rush to steal the ball from a Northwood player racing to the basket. Photo courtesy of Julia Seiger.

"It was a hard fought game," head coach Erin Conley said. "At certain times we played their game instead of ours, and that was a problem."

From the opening tip, it seemed that the Blazers had the game under control. The Blazers jumped out to an early 7-3 lead off two jump shots by Henkai and some free throws by Arnold. The Blazer defense was solid from the early goings as Arnold had a steal that she took coast to coast for the layup and a 12-3 lead. At the end of the first quarter, the Blazers had a commanding 20-8 lead.

Free throws by Northwood in the second quarter helped them get back in the game. With the Blazers ahead 23-10, the Gladiators hit seven early free throws to cut the lead to 23-17. Northwood then drained a jump shot to cap a 9-0 run that pulled them within four points. A fast break layup by Northwood midway in the quarter tied the game at 24-all. The Gladiators added five more points, three from the line, to cap another 9-0 run and take a surprising 29-24 lead. But the Blazers tightened up on defense and a late three by junior guard Inkera Patterson gave the Blazers a 30-29 halftime advantage.

"We lost our focus a little bit near the half," said senior co-captain Saba Aregai. "But we pulled it back together and fought through it."

The teams remained tight during the third quarter. With the score tied at 33, the Gladiators started to pull away a little. Northwood used a fast break layup and a midrange jumper to take a four point lead over the Lady Blazers. Blair was able to hang around with multiple free throws by Henkai, but the Gladiators had a strong quarter and took a 42-39 lead into the fourth, where the Blazers toughened up and pulled out a third straight win to open the season.

"We are 3-0," said senior co-captain Ramita Dewan. "We played hard today and we're definitely getting better, but we still have some stuff to work on." Aregai echoed the sentiment but remarked that there is still a long season ahead. "We're 3-0 right now, but that's only three games into the season," she said. "The season is long and we have a lot of time to keep improving."

The Lady Blazers' next home game is against Blake on Wednesday, Jan. 7 at 7 p.m.