Decrease in student enrollment has little effect on classroom environment

Class sizes have remained the same despite a drop in the overall student population. Student enrollment for the 2007-2008 school year fell higher than projected, according to assistant principal Myriam Rogers, causing large class sizes to remain a problem at Blair.

The administration anticipated that the completed phase-in of Northwood would bring down the student population to 2,736 this year from 2,942 at the beginning of the last school year. The population has reached 2,870, said Rogers, resulting in 26 oversized classes, 14 of which are Advanced Placement. 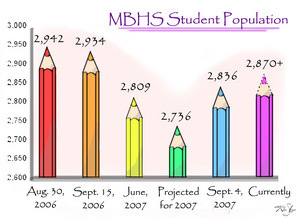 Some classes, such as AP World History, are running slightly over the recommended capacity of 32 students. "All the world history classes as far as I know are running between 33 and 34," said social studies resource teacher George Vlasits. "Some are dropping out but AP and Honors have a low dropout rate."

In inclusion classes, students that have significant learning disabilities count as 1.5 regular students, according to special education resource teacher Lisa Davisson. These students need more attention in class, but some are running over the recommended 23 students per inclusion class. "We're averaging 24-26 students in inclusions classes with the formula," she said.

Classes that are two students over capacity create a dilemma for the administration. "A classroom size of 34 students is not enough to split it into two sections," Rogers said. "Teachers are only allowed to teach five periods a day, so if we split, there will be a staffing issue.

According to assistant principal Linda Wanner, large class size "is not a new thing." Some students may have to be placed in large classes in order for their schedules to work out. "It's a matter of accommodating students," she said.

The influx of transfer students contributed to the underestimated student enrollment and large class sizes, said Rogers. As of Aug. 27, 90 students have transferred to Blair. Two weeks before that, over 100 had transferred. "Most of the kids that want to come here get to come here," she said. "As a public school, we have to open our doors."

However, Montgomery County Public Schools (MCPS) did respond to the high number of new enrollees. "They did give us additional staff once they saw that we started to grow," Rogers said. "We received 2.5 more teachers since August, one being a part time teacher." The additional staff is an equivalent to an additional 13 sections, or 416 available slots for students.

MCPS accepts that it will never have a perfect situation, said Rogers. Instead, MCPS recommends maximum capacity numbers to create an ideal learning environment. "They give us guidelines that we try to follow so that the students can get as much attention as they can get," Rogers said.

The administration is currently addressing this issue by evening out the large classes. "We're working in balancing the number of students in math, science and English," Rogers said. "Overall, we are attempting to plan out the master schedule for all students. That's something we're definitely going to do next year."