The After Prom committee met yesterday in the media center to work on decorations for the beach themed celebration. And while there was a plethora of brightly-colored construction paper and other assorted decorations, there was a shortage of something perhaps more essential: volunteers.

More volunteers are still needed to help out at the event, which will take place tomorrow between 1 and 5 a.m., according to Blair parent Kate Cook, who along with parents Richelle Meer and Edgar Zoz is helping to spearhead this year's After Prom. "We really could use a lot more help," she said. 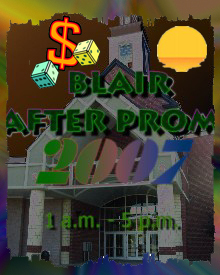 Photo:
Cook said the committee is looking for up to 30 more parents to help out at the event and added that the most hectic time is during check-in from 12:30 to 2:30 a.m. But if parents can't do it, Cook said students may be able to work and earn some student service learning hours. "It might actually be fun, especially for a freshman or sophomore who won't be coming to After Prom itself, to get a sense of what it's like," she said.

Cook said the committee is set financially for the upcoming After Prom, though it welcomes any donations for next year. "We have enough money for this year," she said, "but if anyone offered us money it would be put toward After Prom for next year and we would be grateful to get it."

The PTSA donates $5,000 each year for After Prom, Meer said. Additional money comes from Athletic Boosters and donations from parents, some of whom contributed as much as $250, according to Cook. In addition, a fundraiser at Jerry's in Four Corners helped raise money.

Meer said many of the contributions didn't come as money. "A lot of local merchants give us prizes and coupons," she said. DC radio station 99.5 donated tickets to a John Mayer concert and a Nelly Furtado concert in the summer. Chevy Chase Bank and MacUpgrade contributed as well. Local restaurants like Jerry's donated food to serve at the event.

These gifts will be given out throughout the night as an incentive to stay at the party all the way until 5 a.m., since students cannot come back once they leave, according to Meer.

Meer appreciates all the help and contributions made. "It really is a huge community effort on everybody's part [in] donating," she said.

Despite the shortage of parent volunteers, Meer said production has been impressive. For the past six months, parents on Thursdays helped make decorations in the Media Center, she reported.

This year's theme is "Sunny Side Up." Last year, the After Prom theme was "Mardi Gras," and next year's is "Jungle Luau," Meer said.

"The goal is to transform [Blair] into a beach," said Cook. "There will be some surfboards, a lot of fish and banners." Some of the decorations are saved from year to year, Cook said.

A DJ, inflatable rock wall, money machine, casino tables, minigolf and plenty of other games, with a cumulative cost of $7,000 to $8,000, will be among the entertainment provided at After Prom.

Cook encouraged parents to help out, especially if they have not volunteered at a previous high school event. "This is the last chance for parents of seniors…to really come in and participate," she said.

After Prom is free for all Blair juniors and seniors regardless of whether they went to Prom. Guests from other schools, as well as freshmen and sophomores, will need to show proof of purchase of Blair prom tickets to enter, though no additional fee is required. School IDs are required for entrance.

Students attending After Prom should enter from the Colseville Road side. Volunteers who are working at the event itself should park on the University Boulevard side and come through the SAC.