For most Washington teams, it's been a season of heartbreak and disappointment. The Redskins entered the season with high expectations after narrowly squeezing into the playoffs in 2007. Sadly, after opening the season 6-2, our beloved home team mustered just two wins in the final eight weeks. The disappointing 8-8 season placed them last in their conference and caused them to miss the playoffs.

The problem goes deeper than football. The Washington Wizards have been eliminated in the first round of the NBA playoffs for the past three years, but even making the playoffs alone this year seems like an unrealistic goal. The team's biggest star, guard Gilbert Arenas, is still out of commission with an injured left knee. Their record of 7-31 places them at the bottom of their conference, like the Redskins. And let's not forget the Washington Nationals, whose lack of off-season restructuring after a bone-crushingly bad 2008 MLB season (59-102) has fans grumbling. 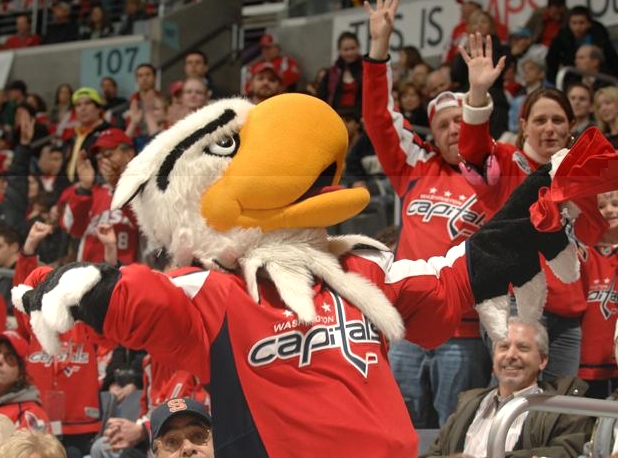 Photo: Recently, fan support for the Capitals has gone through the roof. Picture courtesy of the NHL.

Photo: Recently, fan support for the Capitals has gone through the roof. Picture courtesy of the NHL.

Amidst this gloomy atmosphere, fans are shifting their support to an unlikely team: the traditionally horrendous Washington Capitals. They've sold out 23 of their past 48 home games and their TV ratings are up 140 percent over last season. Even on a national level, this local team is making big waves – according to the NHL, their number two most-sold jersey belongs to Caps superstar left wing and league-leading scorer Alexander Ovechkin. Spurred by consistent performances and a powerful offensive bench, the Capitals have managed a stellar season performance. Their current record of 33-15-4 places them second only to the Boston Bruins in the league's Eastern Conference. As the first half of the NHL season draws to a close, Silver Chips Online breaks down this team's exceptional performance.

The Capitals have managed to turn things around since this time last year, when the team and then-coach Glen Hanlon were struggling with a 6-14-1 start. On Thanksgiving of 2007, Hanlon was replaced by head coach Bruce Boudreau, who refocused the team on crowd-pleasing offensive play. Among other accomplishments, he converted Ovechkin from a good rookie to the league's MVP and leading scorer. Defenseman Mike Green also thrived under Boudreau's hand. As soon as Boudreau took over as head coach, Green became a puck-moving phenomenon and soon led all NHL defensemen in goals. 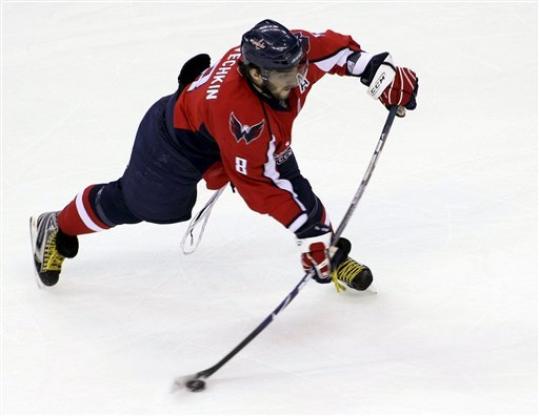 Photo: Left wing Alexander Ovechkin winds up for a shot against the Philidelphia Flyers. Picture courtesy of the Boston Globe.

Photo: Left wing Alexander Ovechkin winds up for a shot against the Philidelphia Flyers. Picture courtesy of the Boston Globe.

Unlike their Washington counterparts, the Capitals are continuing their success, frequent injuries aside. Even the departure of experienced goalie Olaf Kolzig hasn't managed to strike a major blow to the Caps. Their starting replacement, José Theodore, has a .898 save percentage compared to Kolzig's final save percentage last season of .892.

Boudreau has built an offensive juggernaut with exceptional team coordination. Four players - center Niklas Backstrom, right wing Alexander Semin, Ovechkin and Green - have over 20 assists each, demonstrating the high level of teamwork. The Capitals also have a deep bench and a large pool of offensive talent. Although the public spotlight is on Ovechkin, the Capitals have a number of very strong forwards, including Backstrom, Semin and right wing Tomas Fleischman. This limits the effects of injuries. Key players like Semin and Fleischman were placed on injured reserve in December, but the Capitals managed a month record of 11-3 and ended the year moving into a seven-game winning streak.

Finally, there's nothing like scoring to keep the team happy and the fans pleased, something that the Caps have been doing plenty of. Ovechkin is again leading the league with 31 goals and Semin is the 18th highest scorer in the Eastern Conference. Overall, the Capitals are the leagues sixth highest-scoring team and the goals just keep coming. 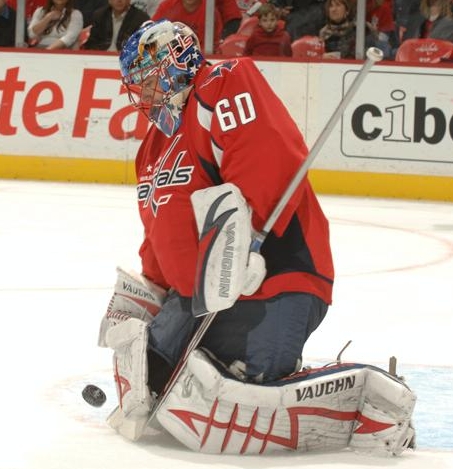 Photo: Goalie José Theodore is brought to his knees during a 3-0 loss to the Columbus Blue Jackets. Picture courtesy of the NHL.

Photo: Goalie José Theodore is brought to his knees during a 3-0 loss to the Columbus Blue Jackets. Picture courtesy of the NHL.

Still, there's plenty of room for this team to improve. On the defensive end of the ice and on the penalty kill, the Capitals need to step up their game. The Capitals' power-play squad killed just 79 percent of penalties incurred, ranking a dismal 24th in the league. The team's sometimes undisciplined play only compounds this problem, as they've amassed 239 minor penalties this season over just 48 games. Despite his scoring prowess, Ovechkin is a major part of this problem, as he leads the team with 28 minor penalties.

The Capitals are also getting arrogant. Lesser opponents are often prematurely dismissed, leading to highly embarrassing defeats against low-ranked teams like the Minnesota Wild and the Columbus Blue Jackets, currently ranked 19th and 20th in the league, respectively. The Capitals also seem to lose focus when playing in unfamiliar rinks. Their home record is an exceptional 19-3-1 but their away record is a disappointing 11-12-2, including a number of additional losses to inferior teams, such as their season-opening loss to the 29th-place Atlanta Thrashers.

All these problems were most evident during the Capitals' recent match on Jan. 20 against the 28th place Ottawa Senators, which ended in an embarrassing 3-2 loss. The game, hosted by Ottawa, was punctuated by six penalties. The final penalty, a tripping call against Semin, allowed the Senators to score the game-winning goal.

Despite their current success, the Capitals are no strangers to mid-season shifts in luck. These weaknesses could be what kill the team's chances at the Stanley Cup this year. "There are too many teams right on our [butt]," head coach Bruce Boudreau said. The Caps have a tough schedule ahead, but one thing is guaranteed: D.C. fans will continue to cheer.