Members of the Young Republicans Club have finally found a place to voice their political views. At after-school meetings, students discuss tax reform, Social Security, immigration laws and the war in Iraq. They support flat tax policies and believe that the media has a heavy liberal bias. But social studies teacher Kevin Shindel challenges their opinions. "How do you know what you think you know?" he asks at almost every meeting.

When Shindel heard that one of his students wanted to begin a Republican club, he quickly volunteered himself to be the faculty sponsor. He admits that many people "died laughing" when they heard he would be supporting a Republican organization, since he is known to be an outspoken liberal. However, Shindel wanted to foster an environment where students welcome differences in opinion. 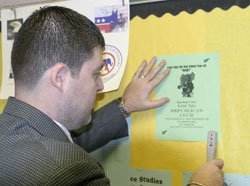 In a school where 93 percent of the student body voted for John Kerry and only five percent voted for President George W. Bush, according to a month-long Silver Chips Online mock presidential election in November, Blair Republicans find themselves vastly outnumbered. "It's harder to be Republican in this school than to be gay," says senior Matt Jordan.

The Young Republicans have faced discrimination from other students because of their political inclinations, say club members. When senior Aminata Jalloh, club founder and president, posted fliers along Blair Boulevard inviting people to participate in the next meeting, she saw students tearing the fliers down as soon as she walked away.

According to Jalloh, Shindel's supervision has helped erase some of the negative connotations commonly associated with conservatives because "students embrace how he doesn't have a problem supporting the Republicans." Jordan agrees that Shindel has made the Young Republicans much more accessible to the school by giving the club a "bigger sense of legitimacy."

Members of the club welcome the different perspectives. "Shindel's pretty liberal. I know he doesn't agree with a lot of the stuff that we talk about," says Jalloh, but the discussions on both ends of the political spectrum make Young Republicans unique. "I wasn't looking for a club where everybody just nodded their heads in agreement. There is more intellectual discourse because the sponsor doesn't hold the same views [as the rest of the club]," Jalloh says.

Junior Kevin Charles also believes he has expanded his awareness of politics by coming to Young Republicans and thinks that Shindel adds a new dimension to the meetings by challenging members' arguments. "He knows how to ask the questions," says Charles. "I couldn't think of anyone else who could do a better job."

The atmosphere Shindel promotes has also helped members of the club reaffirm or reevaluate their own views. "I challenge them, and they challenge me," says Shindel. In addition, Young Republicans frequently invite members of Blair's Young Democrats Club to attend their meetings to increase the level of debate.

Kristi Chakrabarti. Kristi Chakrabarti is finally a Magnet senior who is obsessed with basketball and is a die-hard Wizards fan. When she is not religiously following the NBA, she enjoys playing tennis and reading. Her favorite TV shows are Friends and ER and her favorite food is … More »