It's not often you walk into a movie theater and are told in the opening monologue to leave immediately. But "Lemony Snicket's A Series of Unfortunate Events" is not a usual movie. In fact, it's pretty twisted, from its strange insistence to portray all adults as either incompetent or insane to its dark humor and odd characters. That's why the film is so refreshing; it's a little quirky, it's a little sick and it's extremely entertaining. 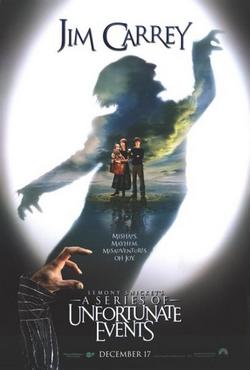 Photo:
With its PG rating, "A Series of Unfortunate Events" was supposed to be the big, box-office, kids' movie of the holiday season, yet the often frightening images used in the film make it inappropriate for many young children. Several of the characters die in unusual and disturbing ways, and the premise of the film (which revolves around children who have lost their parents) may be too upsetting for some kids. It is, as Snicket warns, not a happy or upbeat film, and parents should strongly reconsider bringing children under 10-years-old to see it.

Jim Carrey, who plays the relentless and maniacal villain Count Olaf, gives what may be one of the best performances his career. Most remarkable is Carrey's ability to use this body and facial expressions to create a Count who is both comic and highly disturbing. As he pursues the orphans, the Count takes on various personas; this gives Carrey the opportunity to again flaunt his acting ability. By changing his mannerisms and voice, Carrey becomes an entirely different person, which may be enough to fool the children's guardian, the stodgy banker Mr. Poe (Timothy Spalling), but not the quick-witted orphans. To play a character like Count Olaf requires a certain degree of insanity and talent, and being able to walk that fine line is something Carrey does very well.

Aside from the dark tone, the film is also, at times, hysterical. One of the most amusing characters in the film is the youngest Baudelaire child, the infant Sunny (Kara and Shelby Hoffman). Sunny has a penchant for biting everyone and everything, which she uses to her advantage throughout the film. There are also some clever bits in the film where Sunny is shown babbling in baby speak, and a translation appears at the bottom of the screen. Sunny gets some of the biggest laughs in the film and makes some of the sharpest remarks.

The two other child actors are also superb. Generally in children's films, much of the child acting is weak and uninspired, but these two youngsters, Emily Browning (as Violet) and Liam Aiken (Klaus), are perfect for their roles. They display a very mature understanding of their characters and bring strong performances to the movie.

"A Series of Unfortunate Events" is also outstanding because its look and feel. Although the movie was filmed entirely on sound stages, the scenes are still breathtaking. They are not beautiful in the usual sense; rather, most of the scenes are dark and twisted in a fanciful way. Included in them is the burnt skeleton of a grand, old mansion that the children sift through after a great fire destroys it and their parents. Also, the house built on the edge of a cliff that groans and sways and the ocean that is back-lit by black clouds and a fiery orange sky also add beauty to the unique tale.

"A Series of Unfortunate Events" is one of those special kids' movies where adults probably get more out of it than their children. It's also different in the fact that it actually has a fully developed plot as well as impressive acting. So when your sister wants you to take her to watch it for the tenth time, you probably won't mind. Heck, you might even be glad.