"Les Misérables" is anything but miserable

Victor Hugo's classic is brought to life at the National Theatre

Very few plays have the ability to captivate an audience for three hours. Even fewer plays can claim having a fantastic cast as well as beautiful sets. There is only one play that can make Victor Hugo's 1000 plus pages of "Les Misérables" seem like only a half hour of pure bliss.

The musical begins with the tragic song "Look Down" which features a chain gang in a French prison. During this song, the audience learns that prisoner Jean Valjean (Randel Keith) is being released after 19 years of incarceration. Before he leaves he meets with parole officer, Javert (Robert Hunt), who warns Valjean that if he runs, Javert will find him and return him to prison. After quickly learning that he is a social outcast because of his previous crime, Valjean breaks his parole and begins his life again as Monsieur Madeleine, a factory owner and mayor. 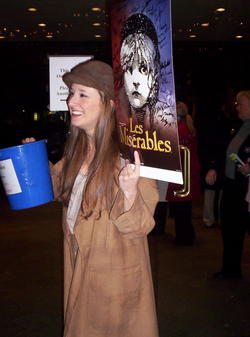 Photo: Candice Nicole, who normally performs in the ensemble but understudies for Eponine, collects donations for a cure for AIDS in the lobby after the show.

Photo: Candice Nicole, who normally performs in the ensemble but understudies for Eponine, collects donations for a cure for AIDS in the lobby after the show.

Valjean befriends sickly Fantine (Joan Almedilla), a factory worker who was forced to turn to prostitution after losing her job at the factory owned by Valjean. On her deathbed, Valjean promises her that he will raise her child, Cosette (Leslie Henstock) as his own. What ensues is a classic tale of love, war, death, passion and drama.

The acting and, most important, the singing in "Les Misérables" is fantastic. Enjolras (Victor Wallace), a man leading a revolt in Paris, is particularly spectacular. Wallace manages to convey all of his character's emotions with intense beauty; he makes the audience believe that he is really fighting for what he is singing about. Additionally, Keith is incredible as the brave and charismatic Valjean. Captivating the audience with the charming rhythms of his voice, Keith carries the show with seeming ease.

The sets of the musical are relatively simplistic, but brand an astonishing mark into the memories of the audience. On a rotating stage that allows seamless set changes, the sets are a remarkable addition to the show, incorporating mainly a gate, a collection of tables and chairs and one expansive set. This set of the Paris underworld looked like a sinister reincarnation of the world of Dr. Seuss with irregular debris protruding from the monstrous set appearing to defy gravity.

Unlike many other plays, the lighting in "Les Misérables" is especially important. At times the lighting sets the mood during a song, while other times it helps convey a location. The lighting is ingeniously used in the production to mask the back half of the stage while scenes are being set up, making for effortless and smooth changes between scenes.

As always, the orchestra to any musical is important, but in "Les Misérables" it is extraordinarily essential because the musical is closer to an opera because only one line in the entire play is spoken. The music helps convey the emotions of the characters. For example, when Valjean is experiencing inner turmoil, the music grows confused and agitated. The music conveys the emotions of the characters spectacularly and does not miss a beat.

One of the most impressive parts of the entire play is when Valjean sings "Bring Him Home," while surrounded by men and women at the barricade. Valjean hits every note perfectly while singing about his hope that Cosette's lover Marius (Adam Jacobs) survives the expected battle. Though "Bring Him Home" is not the most memorable song in "Les Misérables," it is sung with an artistic skill that enchants the audience.

More memorable than "Bring Him Home" is "Beggars at the Feast" sung by Madame Thénardier (Jennifer Butt) and Monsieur Thénardier (Fabio Polanco). In this festive song at the wedding of Marius and Cosette, the Thénardier's provide a humorous aspect to the dark nature of the play.

The only flaw in the entire production are the costumes. While "Les Misérables" offers a wonderful opportunity for beautiful costumes, the costumes in this production are far from unique. The National Theatre chooses to go the traditional way, and have all the typical costumes for "Les Misérables," complete with Cosette bearing a simple black dress, Enjolras wearing a gold adorned red vest and the prostitutes dressed in gaudy torn dresses.

At the end of the day, anybody sees "Les Misérables" at the National Theatre will be able to appreciate the grace and beauty of the reincarnation of Hugo's classic in the form of a wondrous musical.