"Let's go to Prison" provides the worst in crude humor

It was a nice try, but director Bob Odenkirk's "Let's go to Prison" simply failed to muster what 2005's prison movie "The Longest Yard" was able to— constant laughter from the audience. For starters, the film's horribly unoriginal title is such a turn-off and clear indication of how little the film has to offer. Though the movie had its moments, well, more like moment, the ridiculously infeasible and embarrassingly random plot twists left the audience sitting in silence as the credits rolled, wondering three things: if the movie had actually just ended, what had just occurred, and why they had just wasted the past two hours. 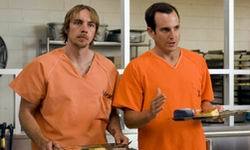 John Lyshitski (Dax Shepard), has lived a life full of exactly what his last name suggests. He's no stranger to the United States legal system, as he's been incarcerated three times since the age of 8— each time by the same judge. He plans to seek revenge on the judge, a man known as Judge Biederman (David Darlow). His plan is foiled when finds out that Biederman has bit the dust, but there's hope for him yet, as he soon discovers the whereabouts of Beiderman's son, pretty-boy Nelson Biederman the IVth (Will Arnett).

Lyshitski frames Biederman for armed robbery and manages to get thrown in the slammer alongside him by specially requesting to be placed in the same jail and the same cell as him. Realistic, we know. The pair heads for the correctional institute, where Lyshitski plans to make Biederman's life a living hell by providing him with the full prison experience. With that said, it would probably make sense if Lyshitski had done so but he instead continues to help Biederman throughout their sentences, much to the audience's confusion. The only visible evidence of Lyshitski's sabotage is a punch that Biederman receives every day, at the same exact time in the same place by a large inmate, who does so in exchange for a pack of cigarettes. How amusing.

If this hilarious aspect didn't strike the audience's fancy, there were plenty of other sublimely unfunny clichés that might have done the job. Enter an abundance of prison rape jokes, comments about inedible prison food and painfully over-exaggerated racial stereotypes which sum up the plot.

Add the completely clashing personalities of Shepard and Arnett into the mix, and the fun doesn't stop. Together, the pair is less than amusing. The audience is made to believe that they are working against each other the entire time, but the film later reveals otherwise. A physical fight between the two with a completely random twist that has nothing to do with the entire rest of the movie ends the film (if you could call it an ending), and gets nothing from the audience besides a "Wait, what?" It seems like scriptwriters Ben Garant and Thomas Lennon got bored and chose the stupidest and most uninteresting conclusion they could possibly think of, making sure it was completely non-sequitor from the rest of the movie.

So if you enjoyed "The Longest Yard's" quips and think there might be some hope for another prison-themed movie, think again. In every way that "The Longest Yard" was a success, "Let's go to Prison" was not. Whether it be trying to mimic Cheeseburger Eddy's hustling of McDonalds with a suspicious inmate who sells toxic chemicals, or imitating "The Longest Yard's" group of flamboyant cheerleaders continually hit on the football players. Frankly, being imprisoned for two hours would probably be a more enjoyable way to spend your time than seeing this movie.

Let's go to Prison runs 84 minutes and is rated R for language, sexual content, some violence and drug material.