Let's watch this movie "All Together Now"

Starring Auli'i Cravalho, known for her role as the titular character in "Moana," "All Together Now," (released Aug. 28th, 2020) targets multiple realistic issues that teenagers could face every day. Covering financial troubles, tragedy and even homelessness, this movie seems like an ideal watch with family and friends. However, the question remains: does the film portray these topics appropriately?

Directed by Brett Haley, who also directed the Netflix original "All the Bright Places," the movie follows the story of Amber Appleton (Auli'i Cravalho), a lively teenager who works multiple jobs with her eyes set on attending Carnegie Mellon University. She and her mom, Becky (Justina Machado), face numerous obstacles because they are homeless because they live in a school bus, which they have access to due to Becky's job as a bus driver.

More troubling issues arise as Becky chooses to get back together with her abusive boyfriend, straining the relationship between the mother and daughter. As the tension in their relationship increases, Amber tries to follow her dreams and pursues her singing talent. However, she refuses all help from her friends and family in an attempt to be completely independent.

The movie succeeds at conveying concepts such as homelessness and financial struggles in a realistic and non-offensive manner, increasing public awareness to how many teenagers and adults alike are affected by financial problems. "All Together Now" clearly depicts Amber’s living conditions on the bus, including how all her possessions fit in one backpack and how there is a compartment on the bus that hides their pillows and blankets. Although this is only one way people can adapt to being homeless, the movie does an excellent job of presenting Amber's routine and the reasoning behind it. 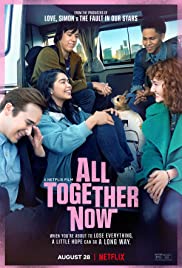 Let's watch this movie "All Together Now"

Photo: Auli'i Cravalho shows off her singing skills as Amber Appleton in the new Netflix Original (Image courtesy of Netflix)

Photo: Auli'i Cravalho shows off her singing skills as Amber Appleton in the new Netflix Original (Image courtesy of Netflix)

This movie also does a wonderful job of portraying the inner conflict and independence struggles of a teenager through the plot. Over the course of the movie, Amber struggles to make decisions about receiving help from her friends, and ends up rejecting their help every time she needs it.

In some parts of the movie, Amber's independence is shown as an advantage — with her talent alone, she is able to land an audition for Carnegie Mellon's drama school. On the other hand, it is also shown that when she refuses all help, Amber collapses under the pressure of her financial status, personal issues and education, spiraling into multiple problems she cannot control.

The movie, however, did have some significant downsides. For instance, Oliver, Becky's abusive boyfriend, never appears in the movie. He is only mentioned, and as a result, the audience sees no interaction between Oliver and Becky or Oliver and Amber. It would have been interesting to see him make an appearance as he plays an important part in both Amber's and Becky's lives.

Another drawback is the underplayed romance between Amber and her classmate, Ty (Rhenzy Feliz). Ty proves to be a kind and considerate friend, and he offers Amber a place to stay when she's completely desperate. However, nothing results from the clear feelings between the two by the end of the movie, which serves as a disappointment to an anticipated couple.

However, these downsides do not take away from the well thought-out movie that "All Together Now" is. The movie brings awareness to many issues and reveals a clear theme: it's more than alright to rely on others for support. "All Together Now" is a great watch with family and friends because it pulls together multiple issues that some people may face daily with an eye-opening plotline.

"All Together Now" is rated PG for thematic content, some language, and brief suggestive comments, and is now available to watch on Netflix.