When former Blair student Lucy Samuel finishes a hard workout at the gym, her muscles don't just feel sore — they feel orange. They feel like an arrangement of dull, pumpkin-colored streaks, to be exact.

This is not Samuel's over-active imagination at work; it's her synesthesia, a rare neurological condition that causes an intermingling and coupling of senses that are normally separate from each other, according to Peter Grossenbacher, director of the consciousness laboratory at Naropa University in Colorado, and one of the leading neurologists studying synesthesia. Synesthesia manifests itself in many different forms: A synesthete might see a color in response to a sound, feel a texture in response to a vision or hear a sound in response to a smell, for example.

While neurologists do not understand exactly what causes senses to mix in the minds of synesthetes, they know that learning more about the condition will lend valuable insight into the function and organization of the human brain. Interest in synesthesia is spreading worldwide as technology develops and as more people become aware of their synesthetic tendencies, says Carol Steen, co-founder of the American Synesthesia Association. For a few synesthetes at Blair, this condition paints the world in a palette of colors that only they can see. 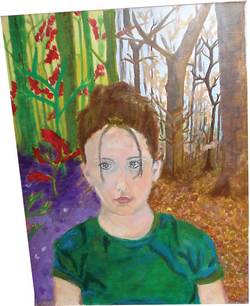 A rainbow of sounds

Samuel has seen colors with her numbers and letters for as long as she can remember. One is white, two is green, three is pink. They never change. Until about five years ago, she thought that everyone experienced the same thing. Samuel remembers the day she realized she was different: She was about to board an airplane by herself for the first time when her worried mother asked her how she would remember the correct gate number once she had landed. To Samuel, the answer seemed obvious. "It'll be easy — the pink and yellow one," she replied. Her mother had no clue what she was talking about.

Samuel soon discovered that virtually no one observed things the same way she did, since every synesthete's perception of stimuli is different. "I had never questioned it before, just like you never question that everyone knows their ABCs," she says.

According to Steen, Samuel's reaction is common among synesthetes first learning about their condition. But unlike Samuel, many synesthetes encounter skepticism when they try to describe their experiences to their peers because so few people are familiar with the condition. To avoid embarrassment, many keep their perspective to themselves until they meet another synesthete with similar associations.

Junior Deepika Beribal never spoke up about her synesthetic tendencies until science teacher and synesthete Caitlin Sullivan discussed the condition in her chemistry class. Though Beribal doubts her own synesthesia because she only associates colors with two numbers, Steen says that synesthesia can develop as the brain matures. Steen's own alphabet is still not completely colored. "Be patient and accept your synesthesia, and it will come," Steen says.

In addition to seeing numbers and letters in colors, Samuel visualizes colors and shapes whenever she hears a sound. This is known as colored hearing, a rarer form of the condition. The whistle of a tea kettle conjures the image of a thin black wisp in Samuel's mind. Human voices tend to appear in warm tones — males' are usually brown, while females' range from red to yellow, depending on their pitch. She is especially partial to golden-yellow music — that is, the music of female singers like Michelle Branch.

Initially, Samuel's parents had a hard time understanding this condition. For a while after discovering her synesthesia, Samuel says, they would ask her about her perception of various sounds around the house to gain a better understanding of what she was seeing.

When science teacher Caitlin Sullivan explains her synesthesia to others, she uses the analogy of a black-and-white picture of a stop sign to represent how she senses colors. "You just say to yourself, even though it's in black and white, the stop sign is red because it's always been red. You just know," she says. But even with that description, it is challenging for her to accurately convey to her students the subconscious associations she experiences between numbers and colors.

According to Grossenbacher, there are currently two competing theories that attempt to explain synesthesia. One theory says that differences in the basic anatomical structure of the brains of synesthetes cause their senses to intermingle. But Grossenbacher's theory argues that the connections between neural pathways in the brain are structured the same way but are used differently. He believes that signals can move both ways through nerves that, in the brain of a non-synesthete, would only allow one-way movement. 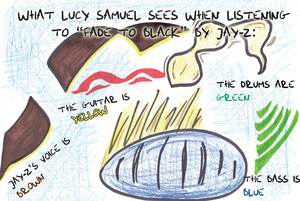 Photo:
Synesthetes can visualize color and shapes in three ways, says Grossenbacher. Some see colors directly on the stimulus, meaning they might see the tint and texture of a human voice as it leaves a person's mouth. Others see colors and shapes on a "transparent screen" about an arm's length away from their eyes, he says. Still others picture colors inside the "mind's eye."

Even though Samuel only sees colors and shapes in her mind, they can be so strong that they interfere with her ability to function normally. Once, the loud noise of a car backfiring on a city street created a vision so overwhelming that Samuel had to sit down for a few minutes to clear her mind. At home, she often finds it hard to see her homework in front of her while the television is blaring or when people are talking loudly nearby.

Putting the colors to work

While the colors in Samuel's mind may sometimes be a hassle, they are also a source of inspiration for her artwork. Once Samuel became aware of her ability to visualize music, she decided to recreate the shapes of different songs in her art. She began to experiment with this ability by sculpting rapper Ja Rule's husky voice using dark, corrugated cardboard. She remembers feeling surprised at the similarity between the appearance of the rapper's voice in her mind and the final product. Now, she has progressed to sketching her favorite songs on paper.

One song that stands out in her mind, Fat Joe's "Get It Poppin'," triggers a scene of particularly complex shapes and colors layered on top of one another in her mind's eye. The synthesizer that creates the fake string orchestra produces a golden-yellow background, while Fat Joe's voice is the prominent, dark-brown shape in the front. The drums form a grey oval that pulses with each beat. The female voices are a mixture of green and grey, surrounding Fat Joe's solid figure in the center of the imaginary page. All these shapes interact and transform in size throughout the song, and transferring them to paper is no easy task.

Senior Rachel Kirsch uses her synesthesia differently — for math. Kirsch memorizes pi, a hobby that she has practiced for years. The colors she sees with her numbers make it easier for her to recite over 400 digits of pi. "Numbers are more alive to me than they would be otherwise," she says. For example, the last group of digits Kirsch memorized — 6735 — gave her trouble until she focused solely on their colors: pink, purple, yellow and green. Sometimes, however, her synesthesia can be a nuisance. Kirsch will occasionally switch a number for a letter with the same color when working out math problems, a habit she finds annoying.

Sullivan's synesthesia, which manifests itself more subtly than Samuel's or Kirsch's, mainly helps her to stay organized. "Chemistry" is a green word to Sullivan, while "physics" is blue. Thus, her planner is made up of green and blue blocks in which she writes her lesson plans. If she ever forgets a certain part of a lesson while teaching, she can easily recall it by visualizing her notes and the different colors that make up each section, she says. Her mix-ups happen most often between students with similarly colored names — even if their faces look nothing alike.

Synesthesia around the world

Since the advent of the internet, synesthetes everywhere have been able to recognize experiences like Sullivan's as similar to their own and join the growing network of those fascinated by the condition. "It was almost as if someone had dropped a stone in the middle of the ocean and ripples went out to every shore — suddenly people all over are exploding with information and questions about it," Steen says.

While her synesthesia is not a common topic of discussion among Samuel and her friends, she acknowledges that it plays a role in her life, mostly because of the large impact it has had upon her art. She feels lucky to have this vibrant world of color all to herself — a world that she can see and others can only imagine.