Photo:
A teenager from Lithuania talks about his experience in his homeland and America: 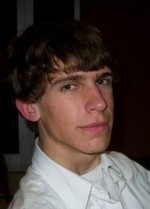 Photo:
I was born in the United States. My grandparents fled from Lithuania during the Soviet takeover. The only time I have been to Lithuania was two years ago, when I visited the country in order to meet my extended family. While Lithuania is similar in many ways to the United States, the biggest difference that I noticed was that Lithuania is slightly less technologically advanced. Some of the streets have cobblestones instead of asphalt, and there are many rural communities.

Compared to the U.S., it has very little city establishments. Many communities are small, and have trees and fields growing between the buildings. The best part of Lithuania is that one can still visit the century old castles and battlements from the past kings and princes.

Location: Lithuania is located in Eastern Europe. It borders the Baltic Sea, and shares borders with Latvia, Russia, Poland and Belarus. 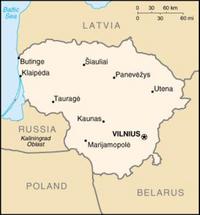 The name "Lithuania" was first mentioned in the German (Teutonic) Chronicles of 1009, however, it was not until the 13th century that Lithuania emerged as a larger state through the union of Baltic territories lead by Mindaugas, the state's first Grand Duke. Lithuania was under constant military attack by the Teutonic and Livonian Orders, and, it became one of the strongest states in Europe by the end of the 14th century.

In 1569, the Grand Duchy of Lithuania joined with Poland in the Union of Lublin.
This joint state fell apart with the annexation of its territory by Russia, Austria and Prussia, and in 1795 a large part of Lithuania was forcibly incorporated into Russia.

In 1863, in order to further colonize Lithuania, Russian Tsar outlawed the printing of books and public use of the Lithuania language. The relief from the Tsarist Russian Empire came with its collapse at the end of World War I.

On Feb. 16, 1918, a group of leading Lithuanian intellectuals quickly signed Lithuanian's declaration of independence. This independence was short-lived, and during World War II, Lithuania was under the control of Nazi Germany, but after defeating the Nazis it was forced to join the Soviet Union.

Around 1990 the modern Lithuanian flag was first hoisted up in the Gediminas Tower in Vilnius as a symbol of its independence. This did not stop the Soviet Union from keeping Lithuania in its borders, and on Jan. 13, 1991 Soviet paratroopers led an assault on Vilnius. While the Soviet Union succeeded in its assault, Lithuania ended up benefiting from this. The struggle of Lithuania led to the international recognition of the republic, which was admitted into the United Nations Organization on Sep. 17, 1991 as one of the first republics that broke away from the Soviet Unions after its collapse in 1991. By Aug. 31, 1993 the last Soviet soldiers withdrew from its territory.

Today, Lithuania is an independent democratic republic and the right of its people is guaranteed by its Constitution that was adopted by the national referendum in 1992.
You can read more about Lithuanian history here.

Anthem: You can listen to the National Anthem and read it in both Lithuanian and English.

Old Town- The capital, Vilnius, is known for its Old Town which houses many beautiful buildings, some dating back to the 15 and 16th centuries. The main street is called Didzioii (Great), which runs through the former city hall building and ends by the gate-chapel Ausros Vartai, where the famous statue of St. Mary, an icon that has become an object of worship for Catholics, is located.

Gediminas Tower- As the symbol of the city, Gediminas Tower, is the oldest of Vilnius castles that are mentioned in the German (Teutonic) Chronicles. The tower was built by the order of Vytautas, the Grand Duke of Lithuania, as a wooden castle. It was later fortified by brick walls after Vilnius became the capital of Lithuania. Today the castle serves as a museum with an observing platform on the roof of the tower, where the one can view the Old City and the valley of the Neris River.

St. Anne's Church-The masterpiece of late Lithuanian Gothic was initially replaced by a small wooden church in the 14th century. From 1495 to 1500, Franciscan monks erected a stone church, which depicts the shape of the modern structure that was further reconstructed in 1582.

Photo:
Palanga- Originally built as a fort, Palanga was designed to aid in battles against Crusaders during the 10th century. By the 18th century, the town had become a prosperous trading port. Later, Palanga became a favorite of Lithuanian fishers, who loved this amber-window to the Baltics. Today, Palanga is primarily a summer resort that stretches along the Baltic Sea and is known as the summer capital of country to many Lithuanians for its vast beaches and other resort areas.

Trakai- Situated between three lakes 28 kilometers to the west of Vilnius, Trakai depicts the Lithuanian history during the Middle Ages through its beautiful castles. Two of the castles, which are still standing today, present the most well known complex of defensive architecture in Lithuania. Â

- The Lithuanian name for the country is 'LIETUVA'

- Lithuania's capital, Vilnius, lies at the geographical center of Europe.

- The state emblem of Lithuania is the Vytis (the White Knight). The heraldic shield features a red field with an armored knight on a white horse holding a silver sword in his right hand above his head.

- Thirty-three types of bricks were used in the construction of St. Anne's Church, which enabled the constructors to experiment with the buildings texture and create unique patterns.

- The highest point in Lithuania is Juozapines Hill (294m), near Vilnius.

- Lithuania was the first Soviet republic to declare independence from the USSR.

- Amber, formed by resin from ancient trees and insects in the resin, is found on the Curonian Spit.