She toils through hours of after-school practices, rehearses stunts and routines to perfection and cheers enthusiastically for the home team at football and basketball games – all before bedtime. A member of Blair's varsity cheerleading team since she was six, 8-year-old Taylor Forbes comes to the squad with an 18-year-old's attitude, bringing dedication, energy and poise that make her a fun and involved member of the team.

Taylor was offered the opportunity to cheer for Blair when her older sister senior Courtney Forbes began cheering in her sophomore year. "One day Courtney brought home a cheerleading jersey of a girl who didn't want to be on it anymore and asked if I wanted to cheer and I said yes," Taylor says. With no prior organized cheerleading experience and some gymnastics under her belt, Taylor had never dreamed of being a varsity cheerleader. But with commitment and a positive attitude over the last two years, Taylor has grown into a legitimate member of the squad.

Taylor attends Blair's practices every chance she can and looks forward to games weeks away. "She comes during summer practice. During the school year her sister picks her up at school when she can to bring her to practice. She is very dedicated," cheerleading coach Roxanne Fus says praisingly.

Because Taylor cannot attend every Blair practice, she also works with her older sister at home to master all of the varsity squad's cheers. "I practice with my sister to get the cheers right, and if I don't get it I keep practicing until I know them perfectly," Taylor says. The hard work pays off - junior and cheerleader Hannah Nelson laughingly says that Taylor "knows the cheers better than some of the members on the squad." 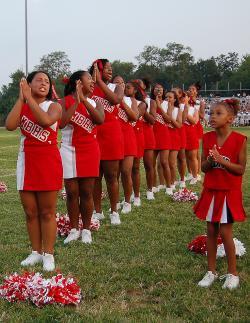 Although Taylor may come across as childish when she wants to eat the whole concession stand at half time or needs to go to the bathroom seemingly every second, her goofy and bubbly attitude make her the team's main attraction. "A lot of 8-year-olds are really shy, but she is always willing to put on a show," senior cheerleader Michelle Kae says.

Every time she has the opportunity, Taylor goes straight for the center of attention. "She's a crowd pleaser," junior Korie Ferguson says. "She challenges me to dance competitions in the middle of games all of the time. She is so cute and a lot of fun." Ferguson describes Taylor as the team's "mascot," filled with a liveliness that comes from a desire to pump up Blair's fans. "I really like to be energetic and make the crowd happy," Taylor says.

Taylor's charm, dedication and energy make her an adorable addition to the team, but sometimes her young age plays a role in team dynamics. "Sometimes it is hard dealing with an 8-year-old," says Fus. "If she gets her feelings stepped on she cries."

The young cheerleader can sometimes become a little overbearing on Courtney too. "Sometimes it's annoying because she likes to go to every game and sometimes I don't feel like dealing with her," Courtney says. "But I love my sister and she knows that," Courtney continues.

Despite the differences in age, Taylor's teammates adore their little cheerleader and involve her in team activities as much as they can. "She's just like one of us, but three feet shorter. We love her," says Ferguson with a laugh. "We even bought her a turtleneck with her name on it," Fus adds. "We try to include her as much as possible."

Taylor admits that she wishes that she could always be included with the older members on her team. "After games sometimes they go out to dinner and I ask if I can come, but they don't let me," Taylor says. 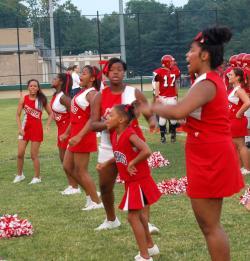 Taylor's early start as a cheerleader has given her a step ahead of other girls her age both on the field and off the field. "Once she gets to high school she will have no trouble. She's very experienced," Fus says.

Although Taylor thoroughly enjoys cheerleading, she says she may give the sport a break for a little bit after some of her closest pals graduate. "I'm hoping to go to Blair as my high school and cheer, but when I get to middle school I may stop because I want to explore other passions besides cheering, but I will take it back up when I get to high school," she says. "When I start again I know I'll be able to succeed and keep improving."

The unique experience cheering with varsity high school girls has benefited Taylor off the field as well. "Cheering has made me more confident and now a lot of my girlfriends look up to me a lot more," she proudly says. Courtney agrees, saying that two years with the varsity squad have made her little sister more mature.

But most importantly, Taylor has discovered a passion to pursue for years to come. "I love cheerleading and it is something that I don't want to give up," Taylor says.