If we don't think about it, "Live Earth" sounds like a great idea: celebrities from across the globe unite to spread awareness about man-made climate change and how detrimental it is to our environment. Let's face it, whether we like it or not, celebrities have a significant impact on the mindset of the average person. They are considered role models by many, their words have value, so when they say, "The world is in trouble, we need to save it," people are likely to listen. However, this message is deeply marred by the disturbingly huge amount of gas used and pollution expelled to put this event into action. 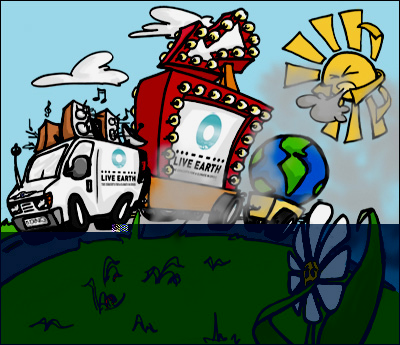 Photo:
Matt Bellamy, lead singer of the British band Muse dubbed the event "private jets for climate change." This sentiment shared by many bands, including Arctic Monkeys and the Who, neither of which performed at the concerts. Bellamy couldn't have hit the mark better. "Live Earth" shows were spread out through all seven continents, which required over 150 performers and presenters to fly a total of 222,623.63 miles around the world. This figure doesn't even account for the various dancers, technicians, and support staff. And we cannot forget the audience of 1,268,500 worldwide, who certainly didn't walk, bike or use any other mode of environmentally friendly transportation to attend the concert.

What was more unbelievable was the main sponsor of the concert held in Germany was DaimlerChrysler, and the Smart car was the official automobile to transport stars. Greenpeace was outraged at this deal, claiming that finding a more inappropriate sponsor would be difficult. They stated that Chrysler has an average carbon dioxide emission of 186 grams per kilometer, although it has been an industry goal to reduce emissions to 140 grams per kilometer. Greenpeace also pointed out that the Smart car is hardly environmentally friendly, as its original purpose was to "transport two people and a case of beer."

But the hypocrisy doesn't end with the planes, trains and automobiles. Of course, "Live Earth" has claimed itself to be the most eco-friendly concert, using low energy light bulbs for the stage and dressing rooms and reusable cups for the audience and urging them to pick up trash and recycle. However, being eco-friendly at such a large level is unattainable. Using hundreds of watts of low energy bulbs can only be energy efficient for so long and requesting a large crowd to clean up after themselves is like requesting for silence throughout the entire concert — it would not have made any difference.

It is likely that the majority of the audience attended and left "Live Earth" in the same way — environmentally apathetic; all they probably cared about was the entertainment. The concert, in fact, provided a distraction from the message "Live Earth" was attempting to convey, what exactly does wishing one's girlfriend as hot as Pussycat Dolls' Nicole Scherzinger have to do with saving the Earth?

If all those involved in "Live Earth" exemplified qualities of environmentally conscious people, the public would be more likely to take their preaching seriously. Only when the organizers make an effort to act with "green" in mind should they persuade others to behave the same way.