The franchise's fourth installment is an action-filled ride

Sylvester Stallone did it with "Rocky Balboa" in 2006 and now director Len Wiseman has done it with "Live Free or Die Hard." Rarely do film franchises make a comeback after a long break and the odds were against the fourth installment of the "Die Hard" series after 12 years since "Die Hard: With a Vengeance." But Wiseman pulled it off and created an action-packed film that is one of the best in the franchise.

Bruce Willis returns as NYPD Detective John McClane, who is now a middle-aged man with a disobedient college-aged daughter Lucy (Mary Elizabeth Winstead) who shares her father's fiery attitude. McClane is given orders to corral a computer hacker Matt (Justin Long) and bring him down to Washington D.C. on the fourth of July. At the hacker's apartment however, McClane has to save Matt from a team of snipers and a bomb triggered by a virus in his computer. 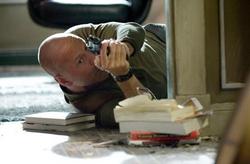 This catapults McClane into the nation's crisis, in which a former Department of Homeland Security security expert, leads a team of computer hackers in an attempt to have a "fire sale," a hacker term that means controlling the nation's transportation, security, finance, and utilities using computers.

The film follows the style of its predecessors in the franchise in many ways. The plot is introduced early on and the storyline progresses quickly throughout. After a brief comedic opening sequence between Lucy and McClane, the action begins in Matt's apartment, continues in D.C., and never stops.

Unlike other recent action releases, "Die Hard" relies on old-school stunts instead of special effects, though a number of explosions find their way into the film. Still the stunts keep the action going and seem like a good choice by Wiseman as it maintains the style of the movie franchise that audiences will recognize.

The acting in this film is what was expected. There were no stellar performances, but each cast member performs well in their role. Willis returns with his sarcastic, take-no-bull attitude to play McClane, and Winstead also does a good job of matching Willis' attitude as the sassy daughter. But although the screenwriters do a good job of keeping McClane's sarcastic nature, the movie's attempts at humor are as ineffective as the bad guys's attempts to thwart the beloved hero.

This action-packed gem of a film revives the "Die Hard" movie franchise but will probably be the last film in the franchise because of Willis' age, which he sidesteps to relive the role of John McClane. Yippee-ki-yay!