Living after the tsunami disaster in India

Life after the tragedy

On Dec. 26, 2004, a series of tsunamis struck South Asia. According to Washington Post, released on Jan. 28, 2005, the death toll after the tsunami has risen to 221,100 people. In India 10,749 were pronounced dead, "5,640 missing -- 5,554 on the Andaman and Nicobar Islands." Below is an article from Anshul Kapoor, an eighth grade student from Bluebells International School, in New Delhi, India. Anshul has agreed to send Silver Chips Online articles about India and student life in his country. 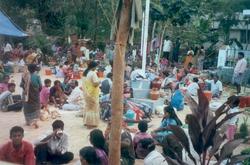 Photo: A view of the displaced people in an open air relief camp in Cuddalore, Tamil Nadu

Photo: A view of the displaced people in an open air relief camp in Cuddalore, Tamil Nadu

New Delhi, India, Jan. 24 - On a bright new day, the morning after Christmas, the world woke up to the greatest natural disaster in recent history. An earthquake of magnitude 9.0 Richter, off the west coast of Sumatra, set off a series of tsunamis across seven countries in South and South East Asia. Many people were caught unawares as the tsunamis lashed into the east coast of India. More than 10,000 Indians were killed and thousands were left homeless.

People saw their own parents, grandparents, spouses, children, brothers and sisters being swept away in front of their own eyes. Many pregnant women died because they could not escape from the tsunami. Women wearing saris and small children also found it difficult to run away. 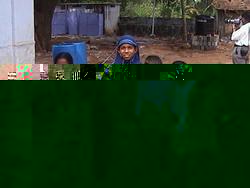 Currently, one of the biggest challenges for the government is taking care of the orphans. There are thousands of children who have been left homeless and all of them need to be secured a good and stable future. Many non-governmental organizations associated with the United Nations (NGOs) and peoples' groups are coming forward to help. Temporary orphanages have also been set up. NGOs, churches, temples and even schools are coordinating with the state governments to set up relief camps for all those who are displaced. 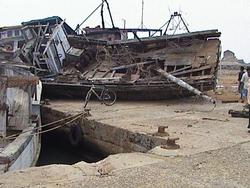 Another problem is that of livelihood. The disaster has left many people in a state where they cannot earn money. This is the biggest problem for the fishing community who have lost their boats and their fishing nets. The government is providing them with food grains but they do not have utensils to cook them or storage space to keep them in. So the grains are at times sold to earn money to buy clothes and other utility items.

The islands that were hit hardest 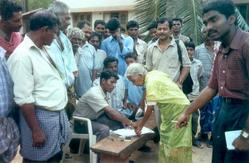 Photo: Taking a thumb impression of the person to whom an NGO is distributing relief at a relief camp in Cuddalore, Tamil Nadu

Photo: Taking a thumb impression of the person to whom an NGO is distributing relief at a relief camp in Cuddalore, Tamil Nadu

The most serious damage in India has happened in the Andaman and Nicobar (A&N) Islands, which are very close to the epicentre of the quake. India set up a very good rescue operation and even provided help to other countries like Sri Lanka. However, almost all the jetties on the A&N Islands broke, hampering the rescue operations and resulting in lack of communication and accessibility.

Amazingly, animals fled to higher ground and no dead animal was found, even though waters flooded a whole wildlife sanctuary in Sri Lanka. After observing the animals, tribals of the A&N Islands also fled to higher grounds. Consequently, hardly any tribals were killed; even the tribes with small populations survived the tsunami.

The tsunami has been a completely new phenomenon for India and it has been a big challenge to cope with it. Now taking no more risks, India is installing a tsunami warning system to cover both the Indian and the Pacific Ocean. The government plans to rehabilitate people at least 500 miles away from the coastline, in keeping with the legal requirement of the Costal Regulation Zone.

The government has also planned to plant mangroves along the coast, which are said to be able to withstand wind and waves. This kind of canopy even saved some villages on the A&N Islands and on the mainland.

A closer look at humankind

This disaster has managed to bring the world closer together. Today the whole world is donating money to help the tsunami victims. Among the tragic stories, many stories of heroism and courage have also emerged. For example, the fishermen who went into the turbulent sea to rescue the stranded tourists on the Vivekananda Rock, off the cost of Kannyakumari, the southernmost tip of India's mainland and the people who are donating their small savings and even a day's earnings towards this cause.

But the major question is: Why can't we, the people, be united under normal circumstances? Why is it that only fear and disaster seem to bring us closer together?

Fidan Karimova. Fidan is a SENIOR!!! She is happy to be a part of the Silver Chips staff, considering that it's the best high school newspaper ever! She would also like to point out that she is one of two Azerbaijani students at Blair and proud to ... More »