When senior Elissa Fischel walked inside the open, sprawling building for her first day of junior high, it was painfully obvious that she stood out in the sea of students. Whenever she walked in the hallways, people stopped and stared. She did not have a sign taped to her back or toilet paper stuck on her shoe; she was unique in that she was American, a foreigner to Brazil. 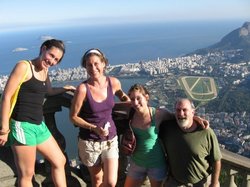 Photo: Fischel and her real family vacationing in Rio de Janeiro towards the end of her trip. Photo courtesy of Fischel

Photo: Fischel and her real family vacationing in Rio de Janeiro towards the end of her trip. Photo courtesy of Fischel

Fischel spent 11 months studying abroad in Goiânia, Brazil last school year. Fischel traveled through Intrax, a foreign exchange program which has sent over 40,000 students to study abroad since 1980. Students can apply to study abroad with Intrax in 17 different countries throughout Europe, Asia and South America, according to the Intrax website.

On route to Brazil and Argentina in 2006, Fischel's parents sat next to an American exchange student who was studying abroad in Brazil for a year. After chatting with the student, the Fischels decided to pitch the idea of studying abroad to their daughter. "When they came back, they told me how cool it was and they kind of just pushed me to do it," Fischel recalls.

Fischel warmed up to the thought of moving abroad, if only to take a hiatus from the personal drama in her life. The first few years of high school had been tough for Fischel and she was tired of "being sad, jealous or angry all the time." However, the chance to explore the world, meet new people and learn a new language also factored heavily into Fischel's decision. "I just thought it would be freaking sweet, which it was," says Fischel.

After deciding to try studying abroad, Fischel went online and started researching high school study abroad programs. She eventually settled on Intrax because of its variety of programs and late application due date. She filled out an application, sent in a photo album of herself and answered questions in a phone interview with Intrax in the spring of 2006.

Despite her doubts that she would not be admitted into the program, Fischel received a letter from Intrax in June 2006 informing her that she was going to Brazil. "When I got the acceptance letter, I was completely elated. I couldn't believe I was really going to go live on my own in another country for a year," says Fischel. 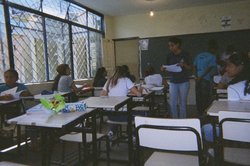 A few weeks before she left, Fischel almost got cold feet. Fischel says, "I kind of got nervous a few weeks before. I was like, what am I doing?" Because Intrax requires students to pay immediately after they are accepted, Fischel could back out but would not get a refund.

Although Fischel was accepted, she could not forget that she was about to enter her junior year — one of the most academically challenging high school years. She voiced her concerns to her counselor, Marcia Johnson, and to Fischel's surprise, Johnson let her go after ensuring that Fischel could fulfill her credits and graduate without repeating a year.

Even after clearing the trip with her counselor, Fischel was nervous about how she was going to make up her junior year. "I don't know what it will look like to colleges when I don't have a junior year transcript," says Fischel. Even today, she still worries but does not regret going.

Fischel remembers her pleasant surprise at the support she received from Blair for her endeavor to study abroad. "I was actually kind of surprised about that because I thought they wouldn't want me to go but everyone was pretty supportive. I guess they wanted me to get out of here," she says with a laugh.

Unexpected but not unappreciated

When Fischel first touched down in Goiânia, Brazil was not what she expected. She anticipated life a la Rio de Janeiro or San Paolo. Instead, she was surrounded by farmland and an intimate city with "lots of cows and chickens and a lot of farmers," Fischel says. "It was like the Idaho of Brazil."

In addition to her unexpected surroundings, Fischel had problems adapting socially. "I had trouble making friends at first because my host sisters were a lot older than me," Fischel says.

Fischel eventually made friends by going to a party with her host sisters a few weeks after she arrived. To her enjoyment, she found fellow teens who spoke English at the party and they became her fast friends. "They ended up being my best friends throughout the trip and then we started speaking Portuguese together after a while," Fischel says.

Because Fischel lived in an isolated community, she had a limited amount of easy entertainment. "It was an hour at least by bus from everything there was to do," Fischel says. As a result, Fischel often stayed home, but did enjoy shopping, going to the movies and just hanging out with her friends.

A few weeks before she left for Brazil, Fischel went out and bought an interactive language program to have a basic understanding of Portuguese. However, the program was not very useful for Fischel. "It didn't help me that much even though I learnt a few words like fish or elephant." 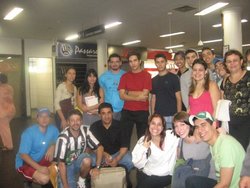 Photo: Fischel surrounded by family and friends at the airport as she prepares to return to the Untied States. Photo courtesy of Fischel

Photo: Fischel surrounded by family and friends at the airport as she prepares to return to the Untied States. Photo courtesy of Fischel

After some time, Fischel became proficient in Portuguese and started to speak like a Brazilian, according to Lynn Unger, her project manager at Intrax. "It was mentioned to me that Elissa was often mistaken for a Brazilian!" writes Unger in an email.

While Fischel began to absorb Brazilian culture, she attended school and took the usual classes in geography, history, literature, science, math and English, not surprisingly her easiest class. For the first five months, she struggled to understand since her classes were taught in Portuguese. As time passed, Portuguese became automatic for her.

But the quiet nature of the community was still obvious in the halls where Fischel still stood out among those who knew her as an American. "Where I went was a small town, it wasn't a touristy place. Many of them had never seen anyone from another country," says Fischel. "People were interested in me, which was fun, but I got kind of embarrassed when I walked down the hall and everyone would stop and stare."

One of Fischel's favorite memories of the trip was going to Pirenópolis, a city 130 kilometers from Goiânia known for its breathtaking waterfalls. Towards the beginning of her stay in Brazil, Fischel signed up for the trip with her exchange program and went with a group of students from Brazil and the Netherlands. "We went in the waterfalls. I will always remember that. That was one of the highlights of the trip," Fischel says.

Fischel also traveled to Rio de Janeiro and Salvador, Bahia with her parents when they came for a visit towards the end of her stay in Brazil. "I wanted to get out and feel the Brazil I was imagining when I signed up for the program," says Fischel, who adds that although her surroundings were a surprise, she does not regret going to Brazil and having to live in a smaller city.

Though the experience was more rustic than expected, it was unforgettable for Fischel, who hopes to return to Brazil by deferring college for a year. Fischel wants to return as a volunteer in Rio de Janeiro or another large city in Brazil where she can help the poor and experience cosmopolitan life. "I learned another language, another culture and I made really, really good friends from all over the world," she recounts.

By going to Brazil, Fischel also learned a key survival skill: independence. "I definitely learned how to be a lot more independent, which is kind of like a preparation for college, like living on my own and having to make my own decisions. There was never a dull moment," she says.