As the college application season gets into full swing, seniors seem to have the weight of the world on their shoulders. While many students at Blair think they have it tough, imagine applying to colleges, searching for scholarships and fighting to stay in the country. For some Blazers this isn't just a hypothetical, this is reality.

Pew Hispanic Center estimates that 11.5 million undocumented immigrants live in the U.S. Though the exact number in Maryland alone is not known, estimates are in the hundreds of thousands. According to the Washington Post, the Obama administration has deported the most illegal immigrants of any presidency at an estimate of 1.4 million. 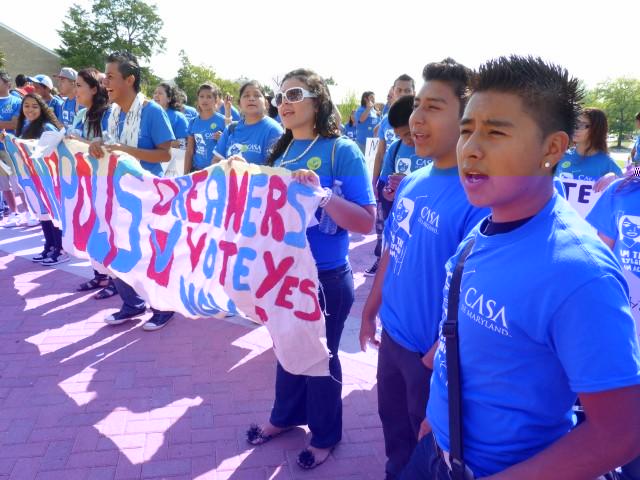 Photo: Volunteers for CASA de Maryland rally together in favor of voting 'Yes' to Question 4.

Photo: Volunteers for CASA de Maryland rally together in favor of voting 'Yes' to Question 4.

The Development, Relief and Education for Alien Minors (DREAM) Act, originally pioneered by Senators Orin Hatch (R-Utah) and Richard Durbin (D-Ill.) in 2001 but struck down in Congress, would have created a six-year path to citizenship for those who came to America as minors and served either in the military or went to college. The bill has been reintroduced in 2009 and 2011. In June, President Barack Obama announced temporary relief of deportation for minors who abide by the law and look to become American citizens. In response to both of these motions, Maryland has proposed its own DREAM Act, which will be Question Four on the state ballot. Maryland's version of the bill will give an opportunity those who immigrated here illegally, but pay taxes and have graduated from a Maryland high school, to attend community college for two years and transfer to a four-year university, paying in-state tuition. On Nov. 6, the fate of many Blazers will be decided.

Though the Washington Post estimates that the bill should receive a 'Yes' from nearly 60 percent of Maryland voters, the final say is a cause of much consternation for many of those impacted, such as Blair senior Carol. Since crossing the Texas-Mexico border at the age of 10 coming from El Salvador, Carol has found a home in Maryland. A solid, hard-working student, Carol dreams of becoming a pediatrician and opening her own private office. Under the Maryland Dream Act, doors will be opened for Carol, who struggles to find afterschool employment because of her immigration status. "This is going to give me many opportunities," she says.

Senior Alexandra is facing a similar predicament to Carol. Having immigrated to Maryland at the age of 11 because of political turmoil in Bolivia, she feels as though Question Four and Obama's executive order are finally giving her the hope to live life like the average American teenager, such as being concerned with the trivial things like passing her driving test. Though she believes her academic life would not be very different had she stayed in Bolivia, Alexandra sees moving to the U.S. as a catalyst for increased responsibility and maturity. Despite previously being pessimistic about what the future would hold for her as a youth with no documentation, Alexandra has been inspired by the Maryland Dream Act to continue working hard. "The act motivates me to keep fighting for my dreams, to keep working harder for my ambitions because everything is getting better for the immigrant community," she says. 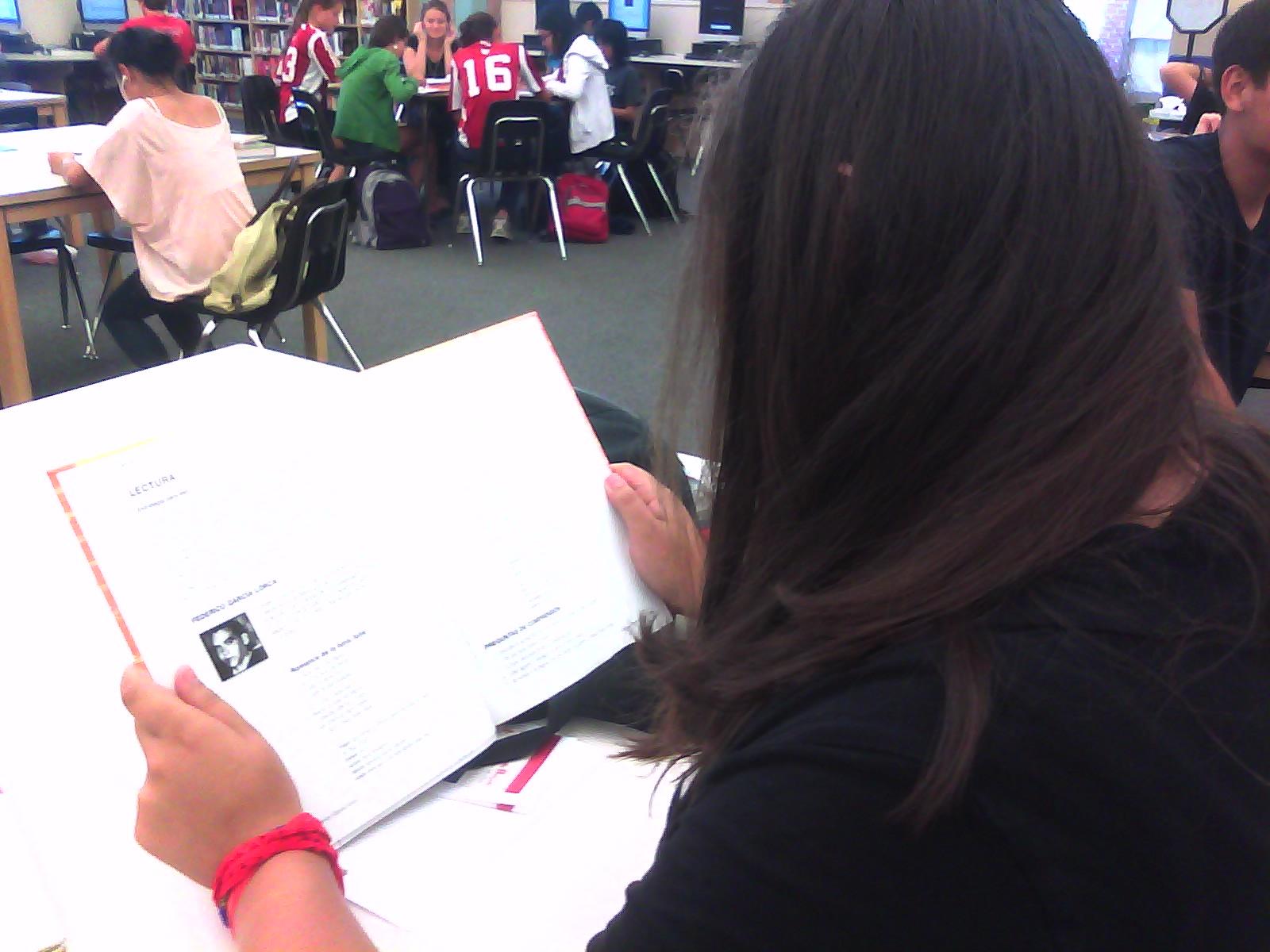 Photo: Senior Carol studies hard in the hopes of attending college and one day gaining citizenship.

Photo: Senior Carol studies hard in the hopes of attending college and one day gaining citizenship.

Though Alexandra and Carol both marvel over the benefits that Maryland's legislation could bring to them, they share the concern that too many of their affected peers are unaware of their status. Many of the people they know believe the legislation is aimed exclusively at the Spanish-speaking population. "Most people think that only Latinos are going to be affected by it," Alexandra says. "I know more than a half dozen of people who come from India, Ireland and China, who are undocumented and are applying for the Dream Act."

As a Montgomery County Public Schools (MCPS) English for Speakers of Other Languages (ESOL) transition specialist, Kristin Ruopp echoes the fact that the act affects much more than the Hispanic population. Working with many "Dreamers," Ruopp urges students to know their official immigration status and to be preemptive in their post-high school plans. "People don't even know they are affected until their senior year," she says.

Blair parent Susan Fleck, who lobbied in Annapolis, Md., for the bill and helped get the resolution passed in the Montgomery County Council of Parent Teacher Associations knows the significance of the Nov. 6 vote for many Blazers. Having hosted "Dreamers" from various states and having worked closely with a variety of people who will be impacted, Fleck hopes that the act will provide opportunity to those who would not have otherwise had it. "Many 'Dreamers' graduate from Blair and have no future unless we speak and vote for them," she says.

Though the Maryland Dream Act would only save money for those classified as illegal immigrants, it is often acknowledged as the first step towards a larger goal of gaining citizenship for Marylanders who have called the state home in their hearts for years, but never by law. The Maryland Dream Act, in addition to Obama's executive order, has given hope to thousands of teenagers like Carol and Alexandra. Students statewide are working hard to earn their keep in this country and achieve the better life their parents brought them here to attain. "I want to have the opportunity to [attend] college, have a better future and be able to provide for my family," Carol says.

As early voting continues to take place and Marylanders eagerly await Nov. 6 to cast their votes, the futures of many Blazers are waiting to be decided. Research released in early October by the Maryland Institute for Policy Analysis and Research at the University of Maryland – Baltimore County shows any amount up to $66 million could be circulated into the state economy by helping to finance the education of those without official documentation. For Fleck and other supporters, however, the choice is less monetary and more about morality. "Living without papers is not young people's choice, it is their reality," Fleck says. "We cannot waste the lives of thousands of our Maryland youth today because they are our future."

The Maryland Dream Act, Question Four on the state ballot, will be up for voting on Nov. 6. Please contact the State Board of Elections or visit the Board's website to find your polling location.