80 or more students assemble to petition against detention policy

More than 80 Blazers gathered in the student parking lot this morning to protest the lock-out detention policy. The protest lasted from 7:20 a.m. to 7:39 a.m., after which it was disbanded by security and the administration. Students attending were given detention. 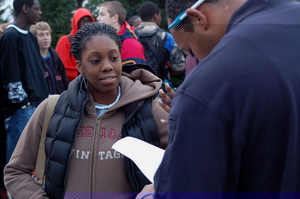 Initially students gathered at the entrance to the SAC, but were asked to move down to the bus lane by administrator James Short. The students protested until security officers asked students to come forward and take detention slips.

"At a certain point, this becomes insubordination. You've made your point. The news and BNC are here," Short said regarding compliance with the punishment. After most students refused to take slips, they were asked to go to room 240, where slips were directly given to the students.

Students who refused to take a detention slip received a suspension for insubordination. "It's within [the students'] constitutional rights to protest, but they will receive the same punishment as everyone else [for being late]," Short said.

The administration implemented the policy on Monday, Dec. 10 in order to combat student tardiness. In the first day, 42 students were given detention slips after being locked out of class. The SGA submitted a formal complaint against the policy later that same day, but has yet to receive a reply.

"From what I understand, [the protest] has been handled correctly," said SGA president Eric Hysen.

Most students who participated in the protest cited annoyance at the administration's failure to consult with the student body before executing the policy.

Other students complained that despite the harsh consequences, the new policy fails to control the problem of tardiness. "I think [the policy] is pointless. People are still being late to class, " said senior Christine Douglas.

Some think the punishment is not proportional with the severity of the infraction. "You're one second late to class and you get a 45 minute detention," said senior Ben Meyer.

Will Bucher. Will Bucher graduated Montgomery Blair in 2008 and now attends Washington University in St. Louis. <!-- Will Bucher, or Rooster as he is known by a select few, enjoys all things fun. Some of his main interests include running, SGA, and partying. Will also enjoys … More »