The Vice President and General Manager of the Advanced Technology Center of Lockheed Martin gave a presentation about research and advancements in space engineering to engineering-interested Blazers during fourth period today. 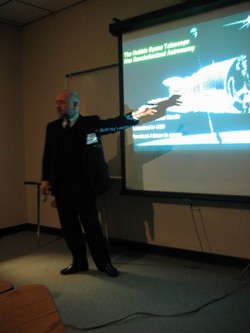 Vice President Aram M. Mika discussed topics regarding space science, earth observation, telecommunications, space-based navigation, space stations, defense systems and technology. Mika took questions while giving a slideshow that included such issues as how an airborne laser combines precision pointing, beam control and atmospheric correction. "I believe it is important for young people to appreciate the impact of technology and science in our lives," said Mika, who oversees the work of about 700 engineers at the company's technology facilities in Palo Alto, California.

Approximately 11 students attended the talk, which was held in the media center. According to science teacher Robert Hopkins, the students invited consisted of those who expressed desire to pursue engineering as a career.

The talk was set up by Jane Kubasik, Executive Director of the Montgomery County Business Roundtable for Education. Jane Kubasik, who is the wife of Christopher E. Kubasik, Lockheed Martin's Executive Vice President and Chief Financial Officer, saw Mika give a technology briefing at a business meeting and was attracted to his manner. "I like how he presented these complex systems in a way that most people could understand," said Kubasik.

Lockheed Martin is the largest provider of information technology services, systems integration and training to the U.S. Government.