Inconsistencies in regulating vending machines could lead to health issues

These days, with the recent influx of media coverage of childhood obesity, students are more health-savvy than ever. Yet, school food seems to have remained largely unchanged - bright Pepsi vending machines selling sugary soft drinks still adorn Blair Boulevard and fast food dishes are served in the school cafeteria.

However, according to Kathleen Lazor, MCPS director of Food and Nutrition Services, while the food served in cafeterias throughout MCPS has not seen many drastic changes in the past several years, MCPS has always strived to serve healthy food to its students. "For instance, the hamburgers are made out of a mixture of beef and soy protein," Lazor said. 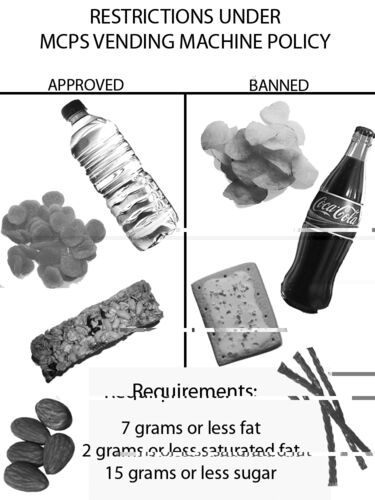 Photo:
Rachel Hayes, a registered dietitian specializing in the field of school nutrition, said that although there have not been many changes to federal regulations regarding school meals, a grassroots movement has started in recent years, due to extensive media coverage around childhood obesity, leading to some healthier changes to school meals. "Although it is not publicized, most pizzas are now made with whole grain crust, most French fries are baked, etc.," she said. "So, while they are still not ideal choices, they are actually not as bad as you would imagine."

Lazor attributes MCPS' desires to put healthy food on the table to the staff in the Food and Nutrition Services department. According to Lazor, there have always been a large number of registered dieticians on MCPS staff. They plan the school menus, Lazor said, along with other nutrition experts. "Menus are planned by a committee, which includes dieticians, school processing staff and chefs," she said.

Lazor said that MCPS menus meet both the United States Department of Agriculture (USDA) requirements for meals and the Dietary Guidelines for Healthy Americans, created by the Academy of Medicine. According to Hayes, the federal government currently requires school lunches to meet the Dietary Guidelines set by the USDA and requires state governments to monitor the quality of food served in schools. However, Hayes said that the current federal regulations in place only cover school meals; snacks sold in schools are not yet federally regulated.

Lazor said that MCPS carefully regulates the food offered during the instructional day. According to Lazor, MCPS recently centralized vending machine regulation to ensure quality of the vending machines and ease administrative workload for the schools. "Schools entered contracts [individually] and some were not getting reimbursements on time," Lazor said. "We found that although there were requirements in place, some vending machines were not meeting these requirements."

MCPS regulation of vending machines, however, ends after the instructional day, according to Lazor. The lack of regulation from MCPS means that students can purchase less healthy options after the end of the school day, like soft drinks or chips.

Hayes believes that the current state of vending machines in schools is unacceptable. "As a dietitian who cares very deeply about the health of children and adolescents, I am not a fan of vending machines in schools," she said. "I do not consider even baked chips or diet soda to be 'healthy' even if they are lower in fat and have fewer calories - [they're] still just filler foods with little nutrient value."

The school store, previously managed by business manager Jim Funk, is now under the control of Assistant principal Edith Verdejo, according to Funk. Verdejo stated that the school store is set to open soon. "We are in the process of getting a sponsor," Verdejo said. "We're aiming for mid-November to open the school store." Verdejo also mentioned that certain items sold in the school store last year will not be returning. "We can't sell all the stuff we sold last year because [products] don't meet state requirements," she said.