The Z Boys show their brutal ascension and demise

Skateboarding today is such a large part of youth culture that it is hard to believe that it was once confined to a small community near Venice Beach, California.

Before Tony Hawk, hundred dollar skateboards and large aerial tricks, clay wheels and homemade decks limited riding on almost any urban terrain. If a rider hit something as small as a piece of gravel, he almost always fell, leading to sport with little excitement or creativity. When urethane wheels were introduced, however, the sport took off as ordinary athletes could do more and more complicated stunts. This transition in skateboarding is shown in "Lords of Dogtown" starring Stacy Peralta (John Robinson), Tony Alva (Victor Rusak) and Jay Adams (Emile Hirsch), the original members of the Zephyr Team. 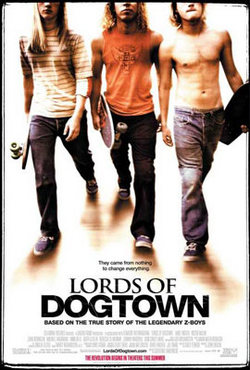 Photo:
"Dogtown" is a tale of friends who bring the sport of skateboarding to the national level. As the movie progresses, the three friends are brought together and ultimately split apart by the sport that they loved and created. Amidst the hectic world they made for themselves, they loose casual, cool lifestyle they originally had.

"Dogtown" shows the transition from the bland early years of street skateboarding through the eyes of three teenagers, each yearning for something more than what they already have. It is this basic desire which flows through the entire film, pushing the friends farther and farther away from their childhoods. Before the friends reach stardom they merely hope to be accepted by the local surf community; they barely have enough money to pay the rent. But when "brighter" and "better" futures are seen ahead in their new sport, each friend goes on their own path; some entranced by supposed riches, some swallowed by more violent desires. It is these character imperfections that carry the movie, helping to create a vivid portrait of average teenagers thrust into a world they are not prepared for.

The film, written by Peralta himself, captures the speed of the skateboarding revolution, contrasting skateboarding's tedious past with its exciting future. The scoring judges' monotone voices and the gray haired contestants of the first competitions provide a stark contrast when compared to the roaring excitement of the crowd and the exclamation of later commentators, as Adams, Peralta and Alva all compete against each other. It is the speed of it all that highlights the changes in the trio of friends because it seems that almost instantaneously they have turned from the closest of kin, to three independent riders, each blinded by their own goals. This suddenness also makes the characters descent even more tragic, and demonstrates the erosion of their innocence.

Peralta's experience with the sport helps him portray the live-in-the-moment thinking of the main characters. This spontaneity helps the three friends find excitement in their hometown, but it proves fatal in the world of endorsement deals and personalized skateboards.

Alva is clearest example of this thought process. He leaves the original Zephyr team, coached by Heath Ledger (Skip), for the riches of the loathsome Johnny Knoxville (Topper) and his paid team. Alva's rash decision-making comes to a climax when he almost sacrifices his career for the chance to hit an opponent, severely damaging his left eye. It is in moments like these where it becomes clear that Peralta, Alva and Adams are not adults, but merely teenager, making many unwise decisions along the way.

Director Catherine Hardwicke (Thirteen), pulls the movie together, portraying "Dogtown" and its characters with the rawness of her earlier films. She shows the emotions of each character and how skateboarding changes their lives with brutal honesty as almost everyone sees their lives torn apart by something they thought would bring them together. Alva becomes blinded by fame and the better life he believes it will bring, while Adams shows a darker side, releasing his anger violently, not only because he realizes the world he has been sucked into, but because he is frustrated at his dead-beat, partying mother and the man who left her.

Hardwicke, at the same time, is also able to show the bliss and innocence of the empty pools that the three friends skateboard in during the beginning of the movie, when the simple exhilaration of a good ride was enough to satisfy anyone's appetite for fame. The film moves into slow-motion as each rider approaches the edge of the pool tile, showing that while they mat have changed the world of skating, they were and at the end of the movie, still are just teenagers in pursuit of their desires.