Committee will submit a report to the Board of Education

A Montgomery County Public Schools (MCPS) work group will submit a formal report to the Board of Education (BOE) within the next couple of months recommending a repeal of the Loss of Credit (LC) policy for the 2010 - 2011 school year, according to Suzanne Maxey, a consulting principal at the Office of Organizational Development who heads the committee.

Photo: The BOE will soon vote on a series of revisions to be made to the LC policy. Picture courtesy of Montgomery County Public Schools.

Photo: The BOE will soon vote on a series of revisions to be made to the LC policy. Picture courtesy of Montgomery County Public Schools.

In a memorandum dated May 28, 2009, the Loss of Credit Project Team outlined four recommendations designed to eliminate inconsistencies with the new Grading and Reporting regulations, which state that "attendance and tardiness are not calculated in the grade." The group will meet again on Nov. 5 to consider the suggestions compiled during stakeholder visits and make final changes to its four-part proposal, which will be passed in its entirety or completely rejected by a BOE vote.

Current LC procedures dictate that students who accumulate five unexcused absences or 15 unexcused tardies for a semester course will not receive credit for the class. Students who lose credit are assigned a failing grade that will be factored into their grade point averages unless a letter of appeal is approved by their principal.

The first recommendation would eliminate LC procedures on the grounds that implementation of the policy is inconsistent among county teachers and is ineffective at reducing unexcused absences. In a Blair Student Leadership Team meeting held after school Thursday, Maxey explained that students with five or six absences often stop coming to school because there is no incentive for them to continue. "We could find no quantitative evidence that loss of credit improves attendance," she said. "Classroom instruction is important. We want to be sure that attendance is tied to academic success."

County reports also indicated that the LC policy disproportionately punishes some student subgroups. A data table referenced during the meeting revealed that 19.2 percent of Hispanic students and 16.4 percent of black students lost credit in the spring of 2008, compared to only 4.1 percent of white students.

Social studies teacher George Vlasits identified language complications and low parental involvement as barriers to submitting notes that will absolve students of an absence, which may account for the racial disparities reflected in the report. "It's not equitable because students who have parents who cover for them don't LC," he said. "More Hispanic and African American students get LCs than white students compared to the number of absences."

The second recommendation would require schools to take disciplinary action against students with an unexcused absence. Consequences would range from conferences at the minimum to detentions as the most severe punishment, according to Maxey. Blair Parent Teacher Association (PTSA) President Peter Lafen was receptive to the new discipline policy introduced at the meeting. "Discipline will be an incentive to parents not to lie," he said. "They would rather have their kid serve detention than damage the almighty transcript."

Despite widespread acknowledgment that current LC procedures constitute a broken policy, many teachers are concerned that the new proposal will be difficult to implement or prove ineffective in application. Social studies teacher and academy coordinator Kevin Moose raised doubts about the discipline recommendation at Thursday's meeting. "I see recommendation number two as a problem with a school so large," he said. "It's difficult to do that and implement it in a way that is fair." 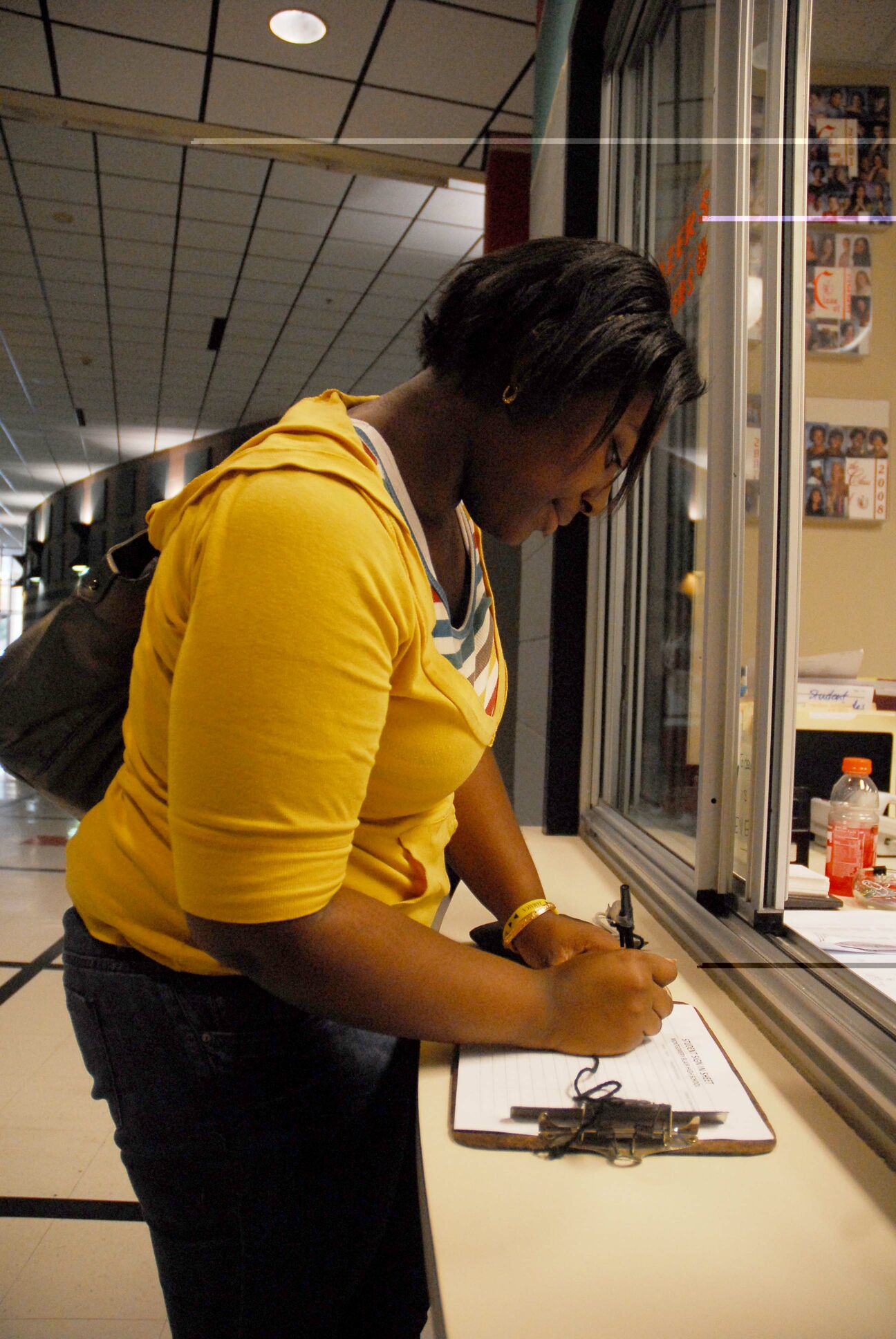 Photo: Senior Alisha Fraser signs in at the attendance office. Attendance may soon change with revisions in the LC policy.

Photo: Senior Alisha Fraser signs in at the attendance office. Attendance may soon change with revisions in the LC policy. Photo courtesy of Alex Joseph.

Maxey conceded that many parents, teachers and administrators have expressed similar doubts about the new policy's effectiveness as a deterrent to skipping school. "There's concern that if we don't have a big stick, kids will decide not to come to school," she said after the meeting. She advised the administration "to campaign about the importance of attendance" when schools reopen next fall.

Maxey identified the third recommendation as the most controversial because it would require teachers to assign an equivalent task or assignment to students returning from an unexcused absence and grade the make-up work with only a 10-percent reduction for lateness. This new directive eliminates ambiguity over a statement in the Grading and Reporting guidelines that teachers are not obligated to assist students in such a situation.

Moose was one of several teachers who have objected to the new scoring guidelines for students with unexcused absences. "If you skip a class for no good reason, you should miss credit for the day," he said.

The fifth recommendation that the work group is considering would modify student transcripts to reflect the number of absences a student has accumulated in a semester, Maxey said.

The team spent the last year researching the policy's impact on student subgroups and soliciting feedback from Student Leadership Teams at all 26 county high schools, the Montgomery County Council of Parent-Teacher Associations (MCCPTA) and the Councils on Teaching and Learning at the Montgomery County Education Association (MCEA). "We've been working hard to get stakeholder feedback," Maxey said. "Failure is not an option. We're going to get this thing done regardless of the difficulties."

This work group is the fourth MCPS team assembled since 1992 to research alternatives to the LC policy. The most recent team suggested revising the policy in 2005, but the issue was shelved until MCPS unveiled its new Grading and Reporting guidelines.