At the start of her sophomore year at Blair, senior Estefany Carrillo would walk into the science office, and explain her situation to any teacher there who would listen. After days of this, she finally got what she had been asking for: classes equal to her ability, not far below.

Carrillo, who had recently moved to the United States from Ecuador and transferred into Blair, was automatically placed into classes she had already taken, such as algebra, or that were far below her ability level. After talking to teacher after teacher, one finally talked to her counselor, who moved her into classes more fit for her ability, like honors physics. 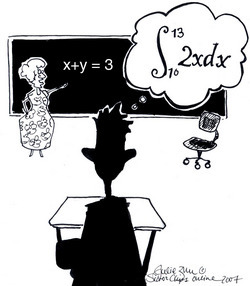 Photo: With limited English skills, ESOL students can struggle in classes, even in those they have already taken.

Photo: With limited English skills, ESOL students can struggle in classes, even in those they have already taken.


Transferring into a new high school can be tough for any student, but the difficultly is compounded when a student changes not only high schools, but also countries. For those students, many of whom do not have the same grasp of English as their fellow classmates, they are not just starting a new high school, but almost starting high school again.

Back to the basics

When transfers identified for English for Speakers of Other Languages (ESOL) program enter Blair, some must be placed in lower-level classes, not because they can't handle the material of harder classes, but because they do not understand the level of English needed to follow along in those classes.

Unlike these students, senior Wendolyn Quintanilla already had a good grasp of the language when she came to the United States. "Most English I learned I learned in Peru, not here," she says. But because of her placement test results, she was placed into ESOL.

In addition, while she was the age of most 11th graders, her counselor insisted that Quintanilla not only start in 10th grade, but also take lower level class. When Quintanilla suggested that she would be able to handle the material of the more difficult classes, pointing to her high grades, her counselor, no longer at Blair, argued that the classes only seemed easy because it was the start of the school year.

"She was insistent that I start at the beginning," said Quintanilla. "She made me think I wouldn't be able to make it at a harder level."

For two weeks, Quintanilla sat frustrated in ESOL English and its corresponding low level classes, until the head of the English department had Quintanilla take a test which moved her out of ESOL and into regular English classes, changing her entire schedule.

Although Quintanilla and Carrillo were successful in moving into regular, honors and AP classes in most subjects, mathematics was a different story. Math classes in international schools typically are taught generally, rather than in the sequence style preferred in the United States, explains ESOL counselor James Distler and transcripts typically report grades by subject rather than specific course. When Quintanilla and Carrillo entered MCPS, they only had credit for general mathematics.

Although they had taken the courses, their transcripts did not explicity grant them credit for Algebra I and Geometry - the two math classes required by MCPS for graduation - and the two had no choice but to retake the classes.

While Carrillo was able to move up quickly through mathematics by taking two math classes at the same time, Quintanilla was left in classes she had mastered before. "Right now I am taking precalculus, when I should be taking calculus," Quintanilla says.

"Stepping out with one foot tied behind"

Students who do not have the same grasp of English as Carrillo and Quintanilla are not only bound by the same credit rules as those who come in knowing English, but also can be forced to remain in the lower level classes until they achieve English proficiency.

Moving into a higher-level class takes more than just understanding the subject material. Distler cites one current ESOL student who is "very good at math, but can't survive Algebra II" because he does not understand English well enough. "When he gets some English he'll go gangbusters in Algebra II," Distler says.

Some students in this situation, he says, think that they should be placed in more difficult classes, but simply do not have the language skills to succeed.

"The students [often don't] understand that it is more than two plus two or speaking English," Distler says, explaining that students need to be able to read, write and comprehend English. A student who can speak English can't necessarily comprehend English on the level needed for a high school class.

"I have students who speak English better than I do, but they can't write a sentence," he explains.
Distler praises the drive and ability of ESOL students to succeed over the language hurdle that Distler compares to "stepping out with one foot tied behind." "They are competitive as any other student in the building when they get their English skills," Distler says.
Once they got over the initial hurdle of their lower level classes, Carrillo and Quintanilla have been successful academically, gaining recognition on the honor roll and taking several AP classes. "My goals are the same. [Being placed back] didn't change things, just delayed them" Quintanilla says.