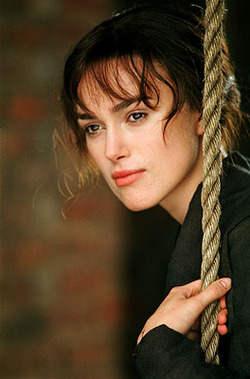 Photo:
"Pride and Prejudice" is a story about true love in 18th-century England, a time when the most important thing on a woman's mind is to find a rich husband, overlooking her true feelings. The movie centers on the Bennets, whose matriarch's (Brenda Blethyn) number one concern is to get her girls married into well-to-do families.

The family lives happily in the village, concerning themselves with their daily chores, when one day they attend a ball held in the area, and Lizzie's older sister falls in love with a certain Mr. Bingley (Simon Woods). It is also at that ball that Lizzie is first introduced to Mr. Darcy (Matthew Macfayden) and where the duo's relationship begins.

At first Lizzie dislikes Darcy, because at the ball he commented on her being very "un-pretty", compared to her sister Jane, so Lizzie makes it clear that "I might more forgive his vanity had he not hurt mine." However, her feelings for him begin to change, as do his for her over a span of time. Thus begins a very complex relationship between two different, yet very similar individuals – a path to self-discovery as well as a discovery of true love.

The choice of the cast in the movie is well-picked. Knightley, already a rising star, once again proves that she not only has the good looks but the superb acting skills as well, portraying Lizzie with a great spirit. Macfayden as Darcy does not stay far behind; he does a fine job making the audience dislike him at the beginning of the movie, due to Darcy's pompous manners, but then captures their hearts by showing his true self: his benevolence. His good looks also play a key in capturing the viewers' hearts.

There is a long list of supporting actors who add to the movie's success – the ever-graceful Judy Dench, as portrayed Lady Catherine De Bourg, Darcy's disagreeable aunt, Jena Malone (Lydia Bennet), Tom Hollander (Mr. Collins) – a bootlicker, who inherits the Bennet estate and visits the Bennet family in order to marry one of the daughters.

Another factor that made the story such a pleasure to watch is the breathtaking scenery – the beautiful nature of the British country. The raw panorama makes the story come to life and makes the audience feel as if they are there with the main characters, whether running through the marshes in the rain or riding on the carriage in the middle of the forest.

With its strong cast and beautiful scenery, this love story is nothing less than a complete success. "Pride and Prejudice" is sure to capture the hearts of every viewer and even make the non-believers to believe in the power of love.

"Pride and Prejudice" (127 minutes) is rated PG for some mild thematic elements.